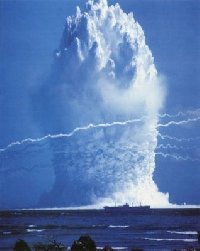 Tohti and Tanaka’s Lop Nur project could fill in many gaps left open by analyses of other mass radiation poisonings.

In studying the Chernobyl aftermath, Møller and his colleagues found that animal populations in the area still show a significant decline in numbers and an increase in genetic mutations, in contrast to earlier reports of recovering wildlife.

But pinning down generational effects in humans has proved difficult, because relatively little time has passed since the disaster and a small number of people were affected, explains Timothy Mousseau, a CRI co-director based at the University of South Carolina. Still, accumulating data suggest “that there is serious genetic damage in people living in these contaminated areas,” he says.

For this reason, Mousseau is optimistic that the Lop Nur project will build up a dossier of genetic evidence. The difficulty, Møller and Tanaka agree, will be deciphering whether effects on second and third generations are inherited genetic mutations or are caused by exposure to contaminated water and soil.

For Tohti, the priority is helping the sick. In March the French government announced that it would compensate civilian victims of its nuclear tests, which were conducted in Polynesia. In 2008 the Chinese state news service Xinhua reported that its government is paying undisclosed subsidies to military personnel involved in the tests. Tohti wants aid extended to affected civilians, adding that 80 percent do not have health care. “Right now, they can’t afford treatment,” he says. “So all they can do is wait to die.”

The Lop Nur project is just the tip of an international iceberg, remarks Abel Gonzalez of the Argentine Nuclear Regulatory Authority in Buenos Aires. Radiation researchers have had easy access to only three sites where nuclear blasts occurred—the U.S.’s site Bikini Atoll, the Soviet Union’s Semipalatinsk site in Kazakhstan and France’s site in Polynesia—and these areas represent just a small fraction of the approximately 500 atmospheric tests the world has seen. “We have a moral responsibility to investigate all nuclear test sites,” Gonzalez says. Certainly for the Xinjiang people affected by the Lop Nur tests, truer words have never been spoken.

Does repeated exposure to radiation affect germ-line cells such that the same mutations get passed on, generation after generation? That is one question the Lop Nur project hopes to answer. The other two major instances of a large population exposure to radiation—the atomic bombs dropped over Hiroshima and Nagasaki—have produced no generational effects in survivors, points out Roy Shore, chief of research at the Radiation Effects Research Foundation in Hiroshima. But he adds that the exposure patterns vary. “The atomic bomb was an almost instantaneous exposure,” Shore explains. “We still need good data on radiation that has been delivered time and time again, over a long period—there may be different effects.”