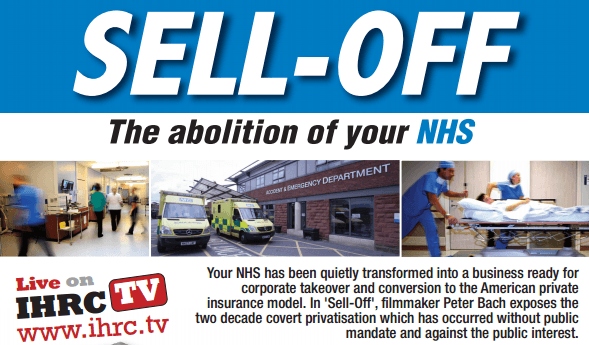 Your NHS has been quietly transformed into a business ready for corporate takeover and conversion to the American private insurance model. In ‘Sell-Off’, filmmaker Peter Bach exposes the two decade covert privatisation which has occurred without public mandate and against the public interest. It challenges the lies put out by politicians and mainstream media.

Join us at IHRC for a screening of ‘Sell-Off’ which will be followed by a Q&A with Dr Bob Gill, Colin Crilly and Dr Lucy Reynolds

Peter Bach’s powerful new film, “Sell-Off” maps out the steady privatisation of the National Health Service which is going on right now. Nobody listening to the evidence of a range of practitioners on the film can be in any doubt that this coalition government has accelerated the process of outsourcing of NHS services started by the Blair government, using the vehicle of the Care Commissioning Groups (CCGs) and Foundation Trusts. Despite this, MPs and the government at continue to insist that the NHS is not being privatised. – The HuffingtonPost UK

Dr Bob Gill has worked as a doctor in the NHS for 22 years after qualifying from Sheffield University. Since 2003 he has been a General Practitioner in Welling. Other roles include being a trainer of future GPs in their final year of training. He became a NHS activists following the threat to close Lewisham Hospital in 2012. He was interviewed by Peter Bach in 2013 for the documentary ‘Sell-Off’ and has participated in discussions around the country following public screenings of the film.

Colin Crilly lives in Wandsworth, South West London. He has been a campaigner for various issues for a number of years (post Iraq invasion in 2003). They include anti-war, Palestine, human rights (inc Talha Ahsan and Shaker Aamer). More recently he has become involved with the anti-cuts/anti-austerity movement, and by extension the NHS. Colin is currently involved with KOSHH (Keep Our St Helier Hospital), which campaign to safeguard the Carshalton hospital from closure.