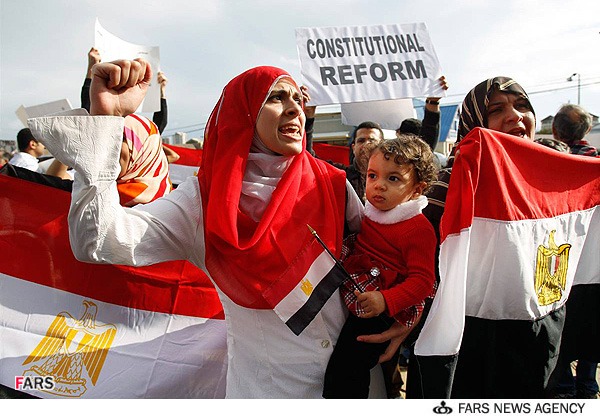 As the first week of protests wraps up on Monday, one can only hope that Egyptians are prepared for the days ahead. As week two is to begin on Tuesday with a hopeful, and if manifested, would be impressive, there are at least three very viable solutions to the protest movement that could play out.

There are three ways this current situation can end. First, Mubarak resigns, his government resigns and a transitional government takes over headed by former International Atomic Energy Agency (IAEA) and Nobel Peace Prize winner Mohamed ElBaradei. This is the most hopeful scenario, as it means limited loss of life, a positive solution for the people who are taking their country back. Mubarak recognizes that his government has lost all legitimacy and his aspirations to create a dynasty in his name is over. This would be the best solution to the impasse, but it appears that the 30-year reign of Mubarak is not going to end without more pressure.

Second, the military takes decisive action and ousts Mubarak from power in a psuedo coup in the name of the people. They install an interim military government and set date for parliamentary and presidential elections. Also, this solution would have limited loss of life and would give more legitimacy to the military, in much the same manner the Turkish military had a number of decades ago by enforcing the rule of law against the government. It seems to have worked for Turkey and could very well be effective in an Egypt that before January 25 was a much divided country. Not the ideal solution, but one that could see the light at the end of the tunnel. One without a Mubarak on any ballot.

Third and arguably the most dangerous, but one that could easily play out on Egypt’s streets as police – including what eyewitnesses report are plain clothes officers – is one of violence, destruction and death. This would see the military not on the people’s side, join forces with the returning police force, and enforce a ban on demonstrations and curfews. The stories from the interior ministry, where row upon row of Egyptians face gunfire as they attempted to take over the symbol of Egypt’s repressive government, would be more widespread. The military would shoot, kill and disperse the protesters in the name of Mubarak. Violence would be high, people, likely many, would be slaughtered as Mubarak defies international criticism and attempts to maintain his power and presidency. This is two-fold uninviting. It would mean that the popular revolt would end with little to no successes for the future of Egypt. Let us hope it does not come to this.

Either way, Egyptians protesting must understand that barring a random move by the president, the demonstrations must be upheld and continued until Mubarak gets on a plane and leaves the country. Much like Gandhi’s India movement, these protests already are showing their strength, their will and their willingness to go the distance.

“We won’t go until Mubarak goes,” one protester told Bikya Masr. This is the sentiment on the ground. There is no Muslim Brotherhood scenario at this point, despite the fear-mongering that has engulfed much of Western coverage of Egyptian affairs. The Brotherhood has made it explicitly clear that they would support ElBaradei as the head of any transitional government and the will of the people is the most important means for the future of any Egyptian government. This is the sign of true democrats, not an Iran-like government as many commentators in the US seem possible.

Egypt is not on the brink of revolution; it is in the midst of true change. We must be cautious before protesters declare victory. They must heed historical precedent. It will not be an easy battle, but as more and more citizens join the ranks of demonstrators, the government, and ultimately the military, will be forced to acquiesce. This is truly a historical moment, one that undoubtedly will be seen in hindsight as the beginning of when Egyptians took their country back from corrupt, out-of-touch leaders who knew not the people they claimed to rule.