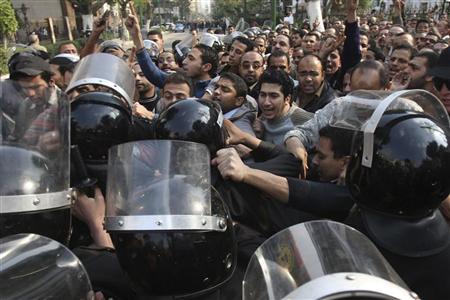 Amnesty International has condemned arrests, detentions and violence meted out against peaceful protesters in Egypt, after more than 90 people were detained in Cairo for taking part in demonstrations calling for political reform on Tuesday.

The demonstrators were also calling for an end to a 29-year government-imposed state of emergency, which has been used to curb protests, freedom of expression and abuse other human rights.

“The Egyptian authorities should demonstrate their commitment to human rights by allowing and protecting peaceful protests.”

Heavy security was deployed earlier today along the main gathering points in Cairo, as well as in a number of universities, in order to prevent assemblies from taking place. It was unclear how many people attended or tried to attend the protests.

Many protestors were cordoned off by security forces before being beaten and kicked as they sought to converge on Tahrir Square in central Cairo. Others were beaten with sticks and threatened with knives by security forces in plain clothes.

Several arrests were made in Alexandria train station, where many people were prevented from travelling to Cairo to join the demonstrations.

Former presidential candidate, Ayman Nour, and several members of his al-Ghad political party were reportedly assaulted and prevented from leaving the party’s offices in central Cairo.

Most of those arrested were also ordered to hand over their mobile phones and identity documents. The detainees will now be transferred to a detention facility called “the military prison”.

Some of those detained are said to have been seriously injured during their arrests. There are also fears that many may be at risk of further beatings and ill-treatment while in custody.

The authorities have also barred journalists from covering the protests and confiscated their equipment. Those affected included an Al-Jazeera correspondent, a reporter of Egyptian Dream TV, a journalist for al-Karama newspaper and a photographer from al-Masry al-Youm newspaper.

Today’s arrests and detentions came after civil rights groups announced their intention to hold protests in early April, and demanded that legislative elections to be held in May, June and November this year, are conducted freely and fairly.

“The authorities must release immediately any one arrested and detained for peacefully expressing their rights to freedom of expression and assembly,” said Malcolm Smart.

Since the state of emergency was imposed in 1981, the Egyptian authorities have used emergency law provisions to ban demonstrations and curb freedom of expression and the related rights to freedom of association and assembly.

The Egyptian authorities have also committed a range of other human rights violations during the past 29 years, including prolonged detention without trial, torture and other ill-treatment, and unfair trials before military and emergency courts.

Amnesty International urged the government to uphold the rights to freedom of expression, association and assembly, including by honouring the commitment it made to the UN Human Rights Council during its Universal Periodic Review of human rights in Egypt in February 2010, to guarantee these rights and the right to participate in public life and politics in line with its obligations under international law.