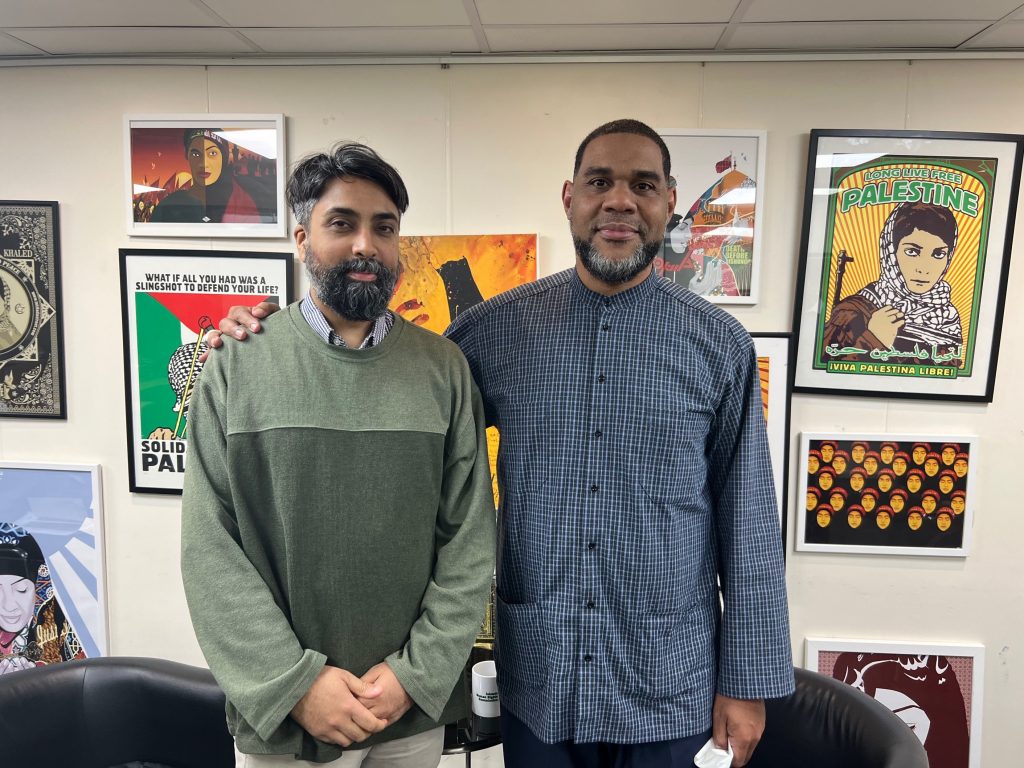 On the evening of 22 December 2021, IHRC hosted an author evening with Imam Dawud Walid for his book Blackness & Islam (available to purchase at the IHRC Bookshop). The event was moderated by Talha Ahsan.

Imam Dawud began by reading an extract from his book. The excerpt described how the pre-modern Arab understanding of blackness was different to how it is understood in the west and first explained that the pre-modern Arabs didn’t have a proper understanding of blackness until the military conquest of Africa by Uthman Ibn Affan (RA). Related to two characteristics 1) physical characteristics and 2) location which is how some Arabs also saw themselves as quasi-black.

Talha asked what motivated the author to write this book and the inspiration behind this book?

Imam Dawud: This book really was meant for three audiences. About 8 years ago, there was a situation that took place in my city. There were vile comments being made on social media where I saw all these alims referring to this black woman as ‘abda’ and then black people as ‘abeed’ and that was kind of a moment where I began online media campaign. It was basically saying stop calling black people the A word, or Abeed which really means slaves. I first wrote an article for Arab-American news in Michigan regarding this issue. This been triggered in me the desire to become more active in  challenging anti-black racism within the American Muslim community and this eventually stretched in to a broader issue of when we saw a personalty here in the UK who made some anti-black comments; a couple of us who are black, imams, responded to him. This interaction was the impetus for why we wrote, co-authored, Centering Black Narrative: Ahl al-Bayt, Blackness & Africa. It was a response to a South Asian imam here in the UK which was literally the straw that broke the camels back. Starting from the Abeed campaign to this interaction online, to the book Centering Black Narrative, led to further research and then the writing of this book.

The second audience is to the Muslims who are black who feel as though there was an erasure of positive contributions of black people in early Islamic history, except to refer to black people as some sort of slave class within the first few generations of Muslims which we know is not true. That was the second reason; dispelling that information and putting forth positive information in regards to the early generation. The third was in response to clarifying misconceptions to many black people who are not Muslims, who are rastas, pan-Africanists, who basically make the charge to Muslims who are back, basically say that you are involved in an Arab religion and that you have exchanged one slave master for another. If you are a convert, meaning you used to follow the white mans religion of Christianity that was bought to you through colonialism, and now you are involved in a type of voluntary colonisation enterprise by embrace the religion of the racist Arabs, so that’s another reason why I wrote this book.

Talha: There are other books that cover the issue of blackness in Islam. Do you want to cover those other books and why your book stands out?

Imam Dawud: The first screed that I know that was written in the time of the Abbasids, the same time of Ahmed Ibn Hanbal. It was a treaty which has a controversial title: The glory of the blacks over the whites, which of course was a type of responsive discourse in the types of experiences that the blacks were experiencing in particularly in Iraq, Southern Iraq in the area of Basrah. This was the very early period, which was the time of the Salaf.

There are other unique works that were written after that, another scholar you mentioned from the Abbasid period ibn al Jawzi al Hanbali. He wrote a book called Illuminating the Misperceptions of the Darkness as it relates to Blacks and the Abyssinians. Ibn Qutayba has a chapter in this particular book on women, but within that he talks about the virtues of black women, a subsection on the merits of black women. We also have Al-Suyuti who wrote three unique works about blackness. The most powerful one which was translated earlier this month, and I wrote one of the forwards of the book, [called] Elevating the Status of the Abyssinians. So, he wrote three books on this particular subject.

More recently, a scholar in the UK Shaikh Yusuf Shabbir from Blackburn and of South Asian background, wrote a book on this issue. We counted at least twelve unique books that talk about blackness in Islam that go back to the classical period, not the modern period. I didn’t pull things out of the sky, I didn’t come out with new knowledge. I took things that were written from earlier works, translated them and added some commentary on some continuous issues.

Talha: I want to go through the book to wet the appetite of the viewers and the potential readers. Your book is in three parts; the first part which you read an extract from defined what you meant by blackness and making it clear that blackness and being Arab were not two distinctive things. Then you talk about, counter-intuitively, the first part about black figures in the Qur’an. Am I correct in saying that there are black figures in the Qur’an?

Dawud: Yes there is in the Qur’an what we can say a colour-blind book in the sense that direct phenotypes and hair textures are not mentioned in the Qur’an… The only person that we can only look at would be Adam (AS) as mentioned in the book was unanimous, amongst the scholars as those know Adam in classical Arabic means dark brown. When we are talking about Brown in classical Arabic, we’re not talking about Brown in my colour which is like with a little red in undertones. We do not have any concise way of knowing this, however in Hadith literature, we are given authentic narrations about the descriptions of the Prophets, one of those we can say is, that we can point to is Nabi Musa (AS) very clearly. The Prophet Muhammad (saw) saw him on the night journey into the seven heavens and he described him being intensely dark brown. We have these narrations also and the Qur’an even alludes to this. The miracle in this is that he looked like someone dark like someone from Nigeria.

For the past 40 years, there’s been a unanimous consensus amongst the historians of the Nile river valley, historians and anthropologists saying that the ancient Egyptians at this time were black people. So, everyone who lived in this area in ancient Egypt, [this would] make fir’awn black as well. But everyone else in that area, the Bani Israeel, they don’t look like people one would see residing in Palestine today or occupying it. He looked more like people of south Egypt, so I just want to put that in to context.

The discussion was then opened up for questions from the audience online which ranged from issues pertaining to black muslims in history and contemporary racism today. The issue of racism within Muslim societies is prevalent and this book provides a crucial service in highlighting the issue of blackness in Islam.