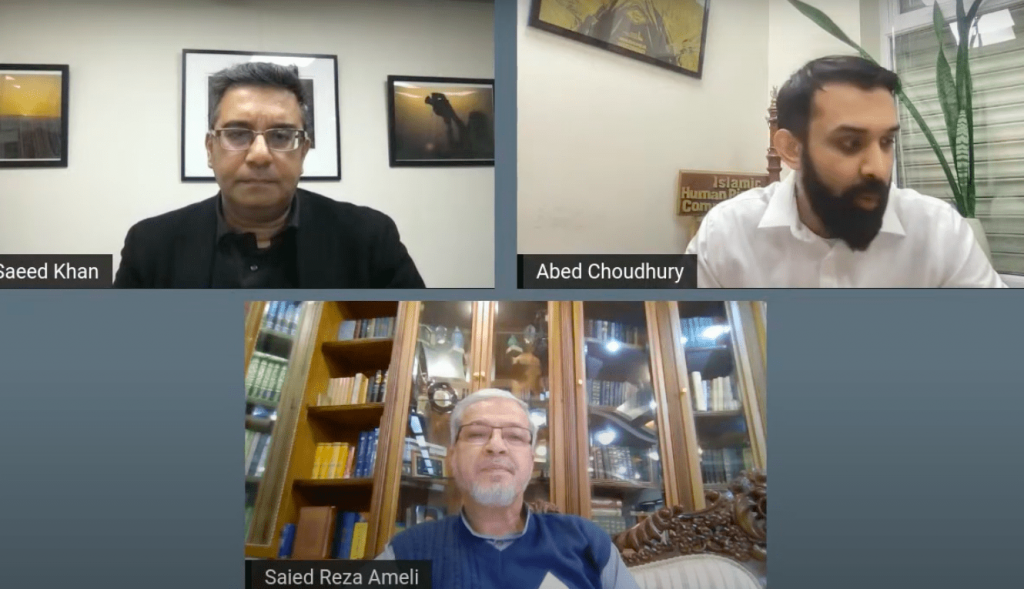 On 14 December 2021, IHRC hosted an event on their report “What’s Going on Here: US experiences of Islamophobia between Obama and Trump” authored by Dr Saeed R. Ameli & Dr Saeed A.Khan. Purchase What’s Going on Here from the IHRC Bookshop. A digital download version is also available here.

The event was moderated by Abed Choudhury who introduced the report and the authors. Abed began the conversation by explaining the background of the IHRC report, explaining that the aim of the report is to document the experiences of Muslims between the Obama & Trump administration.

Below are extracts of the opening statements by the authors:

Saeed Khan: The impetus of this book was to look at this broader issue of Islamophobia and the opportunity to compare two recent administration, the Obama administration and then the Trump administration. And to try to map Islamohopbia through the policy and rhetoric of these administrations and try to square the Islamophobia within that period within the broader arch of American history. What we found was a kind of refutation of what some people might have surmised as being a big anomaly or being in contrast between two individuals that seem completely different. I cannot imagine Barack Omama or Donald Trump having anything in common other than the fact that they occupied the seat of the most powerful leadership in the world. Despite the fact that on the surface these two individuals seemed to be ideologically, diametrically, opposed on many different levels, when it came to issues of Islamophobia, they did not have necessarily that much daylight in between the two of them. This, then, is instructive in helping people understand and asses that when it comes to American policy, particularly policing and targeting of vulnerable communities, it shows a shocking level of consistency and it will have policies that have led up to, or have been part of a long tradition of targeting communities, such as Cointelpro. It helps remove this myth that Democratic presidents are vastly different from their Republican counter-parts. Either because they enact or authorise legislation that is restrictive in and of itself or they allow for their predecessors restrictive legislation to remain intact and in place. We find that after Bush, the Patriot Act really did not go away under Obama, and under Trump we find a similarly restrictive legislation. Now, since the publication of this book, we have a new administration, the Biden administration. To his credit, he did revoke the travel ban that Trump had enacted but when it comes to the core elements of policing, surveillant populations, those seem to be well intact. What we find with Dr Ameli is demonstrating how American policies with particularity to the Obama and Trump administrations represents a longer conversation and a longer trajectory towards Muslim Americans and perhaps others.

Dr Ameli: This research throughout the United States follows previous research undertaken on hate crime in the UK and France, and this  report is trying to find out the situation of Muslims in the US. Between Obama & Trump, there is a very wide range of experiences for the Muslim. Why has this situation happened? This is not the first time we are experiencing against other nations and other religions. In the past, the same experience for example their xenophobic approach to the Japanese which caused the Hiroshima tragedy. At least for the last 50 years, we have the experience of xenophobia for people within Muslim communities and this isn’t really Muslim-phobia. As we explained in the model of hate crime, this is not a form of xenophobia practice; the xenophobia practice comes because of the xenophobic policies and xenophobic ideologies, which starts from Otherisation, which goes in to the segregation policy.

I think this is a policy of changing the ideology of Muslims, to liberal ideology so somehow we can say that this is a fight between the oppressors and the oppressed society. This is basically, in some sense, soft power if they cannot confront a nation or follower of religion via physical war, they go for soft war and soft war is when they demonise the community’s infrastructure. They demonise them in a way that when they put their bombs in Hiroshima and Nagasaki the judgement of the majority of the Americans was to kill all Japanese, this means that the mind of the American society was already demonised and had a very negative picture of Japanese society. The same thing happened with the Native Americans and now the Muslims. This culture of exceptionalism of the United States that we really need to highlight.

Please read below for an excerpt from the Q&A:

How do the results of this report compare to the previous reports on Islamophobia undertaken in 2012? Have things improved? have things become worse? Can they even be compared given that they are two sides of America?

Dr Saeed Khan: I think that, given the question about whether Islamophobia has increased, decreased etc., is a very complicated question because so much of what we find when it comes to Islamophobia and its deployment, remains very subtle, it remains lurking in the subterfuge and its difficult to see how state action necessarily plays its role. A corollary to that is the whole issue of normalisation, that there seems to be a culture which legitimizes and accepts that Muslim Americans are a permissible target of rhetoric, of policies creating almost a presumption.

Do you think class is a determining factor in Islamophobia and does it matter who is going out there committing the Islamophobia?

Dr Saeed Khan: There is the class and the income level of the actor or the perpetrator of Islamophobia and there is the class and the income level of the Muslim. The deployment of Islamophobia may be different depending on the actors and perpetrators income level and class. It is dependent on what resources are available. The wealthy person may be able to deploy Islamophobia perhaps more subtly yet still more nefariously by subtly denying access to that individual. For those who are of a lower echelon, their deployment of Islamophobia maybe more abrupt in the sense of being an act of violence or a slur. In that sense we can look at Islamophobia with both of those elements. For the Muslim who is targeted, I would say that there is no limit or distinction to be made based on class, based on income level.

How can these results be read alongside the findings of other reports from other countries?

Dr Saeed Khan: The reports show that Islamophobia is very pervasive and its important to looks at the specifics of Islamophobia with how it occurs elsewhere. So you see this in places like France, Austria, the recently departed Chancellor being quite open and vocal about his Islamophobia, how it is being debated with Macros, Lepen, and Zeymmour in how each is trying to out-islamophobe the other.

What is the domination hate model and how does that explain all elements of Islamophobia?

Dr Ameli: The domination hate model tries to explain all elements of the hate in the side of hated society and in the side of hating society. It tries to see all elements of hate within the socialist structure. We talk about the structure within which people are socialised in. The lifestyles take place within that, in school, in everyday life, in everywhere. We talk about the hate model in two levels, first how hate ideology goes for hate policy and how hate policy goes for hate representation everywhere. The way they represent Muslims for those who are the subject of hate. It is representation and when we talk about representation it is the equation of one is equal to all and all is equal to one. And this hate representation goes to the hate practice.

The event highlighted how there is little difference between the Republicans and the Democrats regarding Islamophobia. The authors highlighted how Islamophobic policies continued to legitimise draconian measures and policing policies that the U.S was already engaged in with minority communities. The report is a very important report showing how Islamophobia fits within the paradigm of US racism and therefore, will be of interest to all policy makers and campaigners who are involved in the anti-racist struggle.