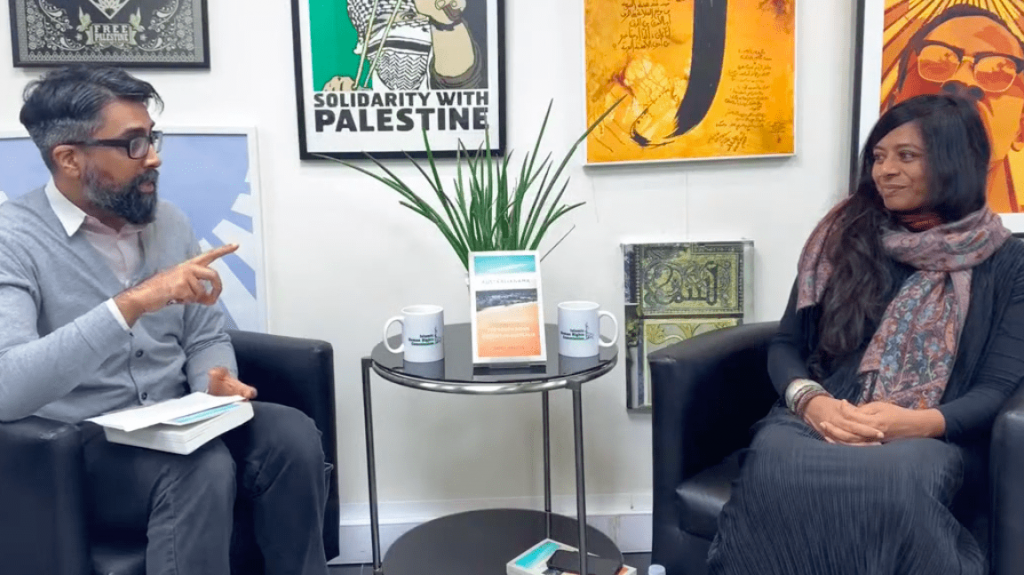 On the evening of 18 November 2021, IHRC hosted an author evening with Samia Khatun, Senior lecturer at SOAS and author of “Australianama: The South Asian Odyssey in Australia”. The event was moderate by Talha Ahsan, host of the Abbasid History Podcast. Purchase Australianama from the IHRC Bookshop.

In her opening remarks, Samia explained how the journey, to writing this book, came out during a particularly painful period in her life when her mother was ill in a mental health institution and was put in a room with a female Afghan war veteran who wouldn’t take off her uniform. Trying to explain, to members of staff, why her mother should be moved was a visible manifestation of Australia’s inability or unwillingness to understand Muslim, and indigenous issues that affect these communities as well as to highlight the contradiction of living as a Muslim, or immigrant in Australia at the same time when Australia was involved in bombing Muslim countries. It was during this period that Samia discovered a Bengali book of Sufi poetry which contained very profound forms on knowledge.

The author and her family emigrated to Australia when she was young and back then, she stated, that they thought of Australia as “Destination West”, a location that is modern, progressive but at the same time, a location where the voices of indigenous people and immigrants are largely invisibilized. However, the author describes how her discovery of this Bengali book of poetry, and other books from indigenous communities, seemed to be an iconoclastic moment which shattered this myth of “Destination West.” Australianama chronicles the authors journey in to these invisibilized communities, unearthing poetic forms of knowledge which doesn’t just tells their stories but also has a more implicit important lesson to learn; No matter how successful Australia’s Settler-Colonialist project looks like, it did not succeed in silencing indigenous and immigrant communities.

The opening remarks where followed up by a Q&A session which was moderated by Talha Ahsan and you can get an understanding of some of the questions and answers below.

Talha: “Tell us more about the conflict between the aboriginal understanding of their landscape and this imposition of these modern railway tracks and how these influences your idea of natural enlightenment knowledge & enlightenment technology?”

Samia: “So one of the most incredible in Australia if you get at all involved in any form of anti-racist activism is that you have to very quickly, get energised by aboriginal social justice stuff so that’s in many ways where my historical training came from. So when I noticed that these camel men with camels where coming in to Australia, at times to help build these railways, at times coming in from karachi and elsewhere to help build colonial infrastructure like the railway. And what’s very interesting is that the south Asians that come in with their camels, they end up, in a sense colonising, what’s known as dreaming tracks in Australia so it’s a concept that’s quite difficult to explain to an audience outside of Australia so that Australian Aboriginal chosmography is so chriscrossed with these aboriginal dreaming creatures travelling across the landscape so its about the formation of the landscape through the movement of these dreaming creatures. Now the way that these things work is extraordinarily complicated and you have to be on aboriginal land to understand it but one good way is if you have linear time”

Talha: “In the turn of the new century, you find new movements appearing, so the year 1883,, you also traced certain movements that were happening around this time. Why don’t you give a brief overview of that as well?”

Samia: “One of the things that I realised was one of the most well known mosques is the mosque in Perth. It was built in 1904 and actually, it’s a culmination of some of the smaller mosques that were built in the desert from the 1880s and so on. One of the things I have realised is that its actually an Ahmadiyyah mosque which no one ever really talks about in Australian history because no one really knows what to do with Ahmadiyya thought its not something that they would delve in to when they write about monolithic muslims. So one of the most exciting things was actually delving in to ahmadiyyah thought and realising that mirza Ghulam ahmed in late 19th century south asia is understood to be a prophet in ahmadiiyah thought. What that means, what that sets ahmaddiyah thought aside from, I guess, mainstream muslim thought, is that Ahmediyyah practitioners believe that they are living in prophetic times, that you can foresee the future. So one of the, sort of, corollaries or a result of that is in Australia you have a handful of ahmediyyahs, theres lots and lost of people who aren’t ahmadiyyahs as well, is that you get people writing in to the newspapers after they’ve had dreams and they write “I had a dream and here are the three prophecies that will happen in the future” no Australian newspapers, and I guarantee these are in British newspapers as well if you know how to look for them. Now, you start getting these publications of prophecies now this is much bigger then ahmediyyah thought. Now in 1857 the Sepoys rebillions, whatever you are going to call it, after the fall of the Mughals, from south asia you get lots and lots and lots of people asking “When is the next legitimate Muslim state with power going to come about” so lots of people are having dreams, lots of people are writing in to newspapers”

Question from the audience: “Is there a movement like Decolonise Universities in Australia and what can we do to help?”

Samia:” So its been a really long time since I lived in Australia, I left in 2018. So my experience of the decolonial stuff comes from SOAS. However I’d like to point out that this is a book that I started writing in 2009 and finished in 2018 so its actually before the decolonial stuff went off. I was writing it because I was angry and I had life things to sort through. The decolonial movement I think have real, that’s probably a whole separate other question, and a whole other panel of what the strengths of the decolonial movement are which I don’t think is possible but what I do think is that you have to radically re-think what the human subject is. My interest is what is the role of the history book in constructing the human subject and  what is the role of the history books now, in the construction of the human subject. So I cant say so much how it compares to Australia, but one thing I can say is that in Australia you are always on aboriginal land. Always. Here, this is ground zero for the invention of property, This is where modern conceptions of property as we understand it across the anglosphere world comes from. What other special systems is there? What lies beneath property. In that sense you have another resource if and when you are from the colonies”

This event, and the book, will be of interest to those interested in the subjects of immigration, racism, settler-colonialism and indigenous rights.