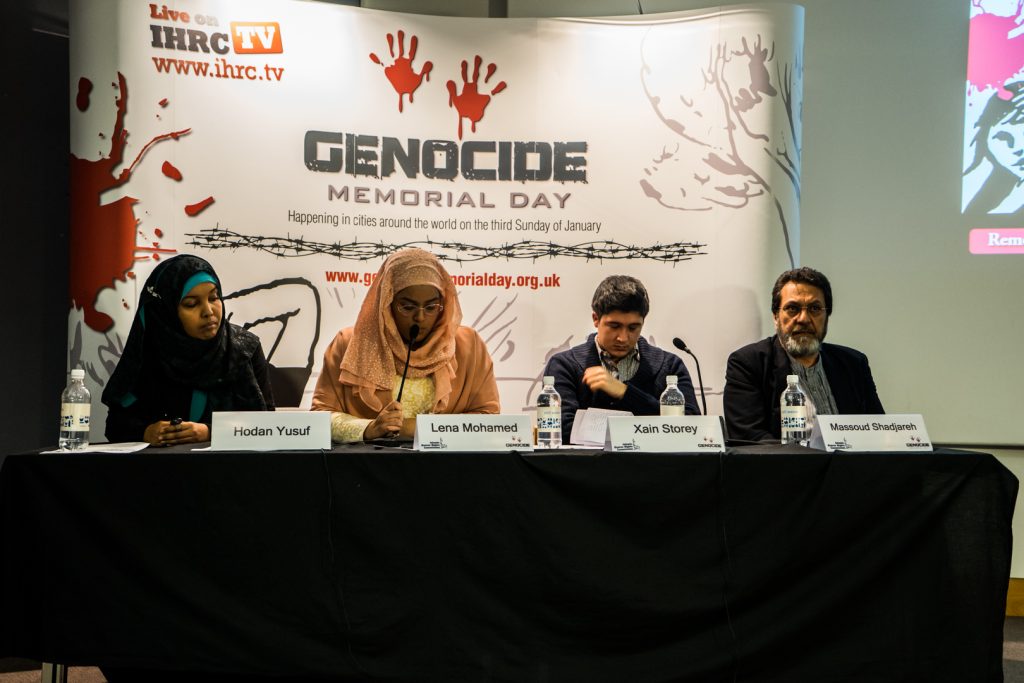 The Islamic Human Rights Commission held their annual Genocide Memorial Day conference today for the 5th year running since its inception in 2010. Every year attendance grows, as does global media attention and reporting from it, and this year GMD continues to grow as a global event with Jerusalem, Amsterdam, Paris and Brussels joining in with simultaneous events.

Our colleagues in Paris made a live statement to the conference via internet video link explaining that their commemoration has been disrupted in a sense as they are working intensely to gather other radical grassroots organisations to make a “counter-attack” against the current Islamophobic and racist tide in France which is increasingly defining the nature of French nationalism currently.

More than 100 attendees packed the conference hall in central London, with the conference opening up with a message of solidarity from Sandew Hira in Amsterdam expressing the importance of holding this conference at the current time. Hira sent a message of support to us in London from his own even which also combines the 50th martyrdom anniversary of Malcolm X / Malik El-Hajj Shabazz, the great revolutionary for justice against colonialism and neo-colonialism.

Maria Lera, academic specializing in Psychology fro Seville made a fascinating contribution about the treatment of Muslims and Jews in the defeat of Islamic Andalucia and its parallels with the Holocaust in 1930s and 1940s Nazi Germany and Europe. The questions and answers discussion after her talk explored the complexities of whiteness and how colonialism and neo-colonialism defines according to its own interests those who are inside the club of whiteness and those who are ‘othered’ so as to, in the words of Fanon as Maria Lera cited, put into the zone of non-being to facilitate genocidical acts and genocide against them.

Rabbi Cohen from Neturei Karta explained that the current Zionist state of Israel is far from what Orthodox Jews consider to be a legitimate state according the Jewish scripture, and its injustices are graphically expressed in the genocidal acts against the occupied and oppressed Palestinian people.

He was followed by the writer, journalist and blogger Matt Carr. Having penned a number of published works, he was well-versed on the topic at hand. He explicitly stated the value of using history as a tool and drawing parallels with the present day. This was clearly expressed in his discussion of the oppression of the Morisco peoples in post Islamic Andalucia who were harassed and forced to assimilate till they were eventually expelled from Spain.

Law graduate and writer Xain Storey made a profound statement on the genocide against First Nation peoples in North America. Describing the facades of freedom and liberation the USA and Canada uphold, Xain Storey explained that they were nothing more than falsehoods. Both nations were built on the bones of millions of indigenous peoples. The systematic oppression against them occurs to this day.

Before the conference came to an end, IHRC’s annual poetry competition for children ages 11-18 was announced by the poet and journalist Hodan Yusuf. The winner’s prize includes an all expenses paid trip Bosnia. Hodan then performed a spoken word piece of her own on the steps leading to genocides – steps that have been tread time and time again.

Masoud Shadjareh, chair of the IHRC concluded the conference by thanking the attendees and stating very clearly that the recent comments of the Home Secretary Theresa May in saying that Britain must fight anti-semitism are problematic if the fight against anti-semitism is not in conjunction with the fight against all forms of racism including Islamophobia, and as such the British government must stop their support to the so called ‘Isis’ or Daesh in Syria and acknowledge the alarming rise of fascism in Europe.

Video footage from the event will be available soon. Please email nadia@ihrc.org for any media requests