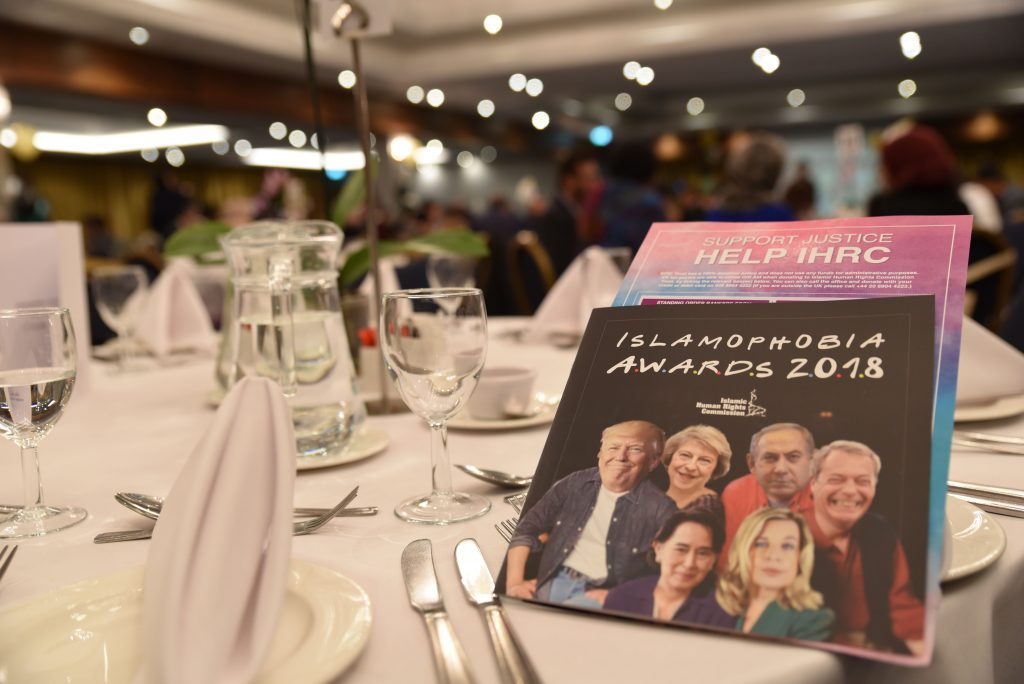 IHRC successfully hosted the 2018 Islamophobia Awards on Sunday, 11 November. The event is a chance to raise awareness of Islamophobia while also providing an opportunity to mock and poke fun at those who have been the most Islamophobic over the past year. Featuring a satirical awards ceremony, a comedian and live music; the event was well attended and well received.

Watch the video below or read a full report underneath.

The evening began with a short introduction by Raza Kazim followed by a Quran recitation to begin the proceedings. Dinner was then served and guests mingled and chatted amongst themselves. The event has always been attended from various members of the community – politicians, religious leaders and families – all looking forward to an entertaining evening.

Just before dessert was served; our musicians were led on stage for their performance of the evening. Hugely talented and acclaimed artists: Saphwat Simab is a UK based Rubab virtuoso who has performed at some prestigious venues here and abroad. Ustad Shahbaz Husain is a Tabla master based in Manchester but a UK artist on the world stage. He has accompanied many big names in the musical scene. The audience was hugely impressed by their entrancing performance and they left the stage to rapturous applause.

Our hosts for the evening Nazim Ali and Latifa Abouchakra then kicked off proceedings as we made a start to our ‘satirical ceremony’. Split into four different categories, the public made online submissions of who they would like to see nominated. The nominees were collated and the people around the world were asked to vote for who they would most like to see win. The first category of the evening was ‘News Media.’

Clips from the likes of LBC and Melanie Philips showcased the bias and hatred spouted on a regular basis while newspaper headlines from The Sun and Daily Mail were read aloud. Daily Mail was announced as the winner of the ‘prestigious’ award. Nazim joked that Islamic scholars have said that when in the bathroom, the Daily Mail should not be used even in the absence toilet paper.

As well as ‘awarding’ those who flown their anti-Muslim flag high; we also set aside time to pay serious consideration those individuals and organisations who have truly fought against Islamophobia often in hugely extenuating circumstances. These are our ‘Positive Awards’ and the first one of the night went to Ian Law.

Ian Law is a Professor at the School of Sociology and Social Policy at the University of Leeds. His area of expertise is racism and ethnicity studies which he has been researching since writing about housing in Liverpool in 1978. He is the founding director of the Centre for Ethnicity and Racism Studies at the University of Leeds and most recently acted as the lead of the Counter Islamophobia Kit which sought to use counter-narratives of Islamophobia across EU member states. The work Ian has done in these regards is invaluable and marks him as someone who is passionately committed to the struggle against racism and Islamopohobia.

Unfortunately Ian was not able to be at the event in person. However, he did sent a pre-recorded message where he conveyed his thanks as well as his commitment to continuing his vital work to tackle Islamophobia and discrimination.

The next satirical award of the evening was in the ‘Book/Movie/TV’ category – seeking to recognise those who play a very insidious role in manifesting bad sentiment towards Muslims.

The hosts mocked actress Roseanne Barr’s fondness for Israel; the nonsensical Raheem Kassam; a white non-Muslim woman having to ‘dress up’ in order for Islamophobia to be taken seriously and also sand ‘I’m a Jihaadi girl’ to the tune of ‘Barbie Girl’ in memory of Bodyguard. The BBC drama was eventually crowned the winner for its attempts at being subversive that only further perpetuated tired racist stereotypes that are peddled so often in the media.

The second award of the evening went to the organisation ‘Media Diversified’ also known as ‘Writers of Colour.’ Writers of Colour or Media Diversified is an organisation with a mission to challenge the homogeneity of voices in UK news media, through addressing the under-representation of BAME communities. Their digital platform has produced numerous features and opinion pieces across an array of topics that celebrate the interests of people of colour while also highlighting and bringing awareness to the issues affecting them. They have encouraged initiatives that seek to drive representation and inclusivity of people of colour in the creative industries; they’ve published books and organised literary festivals. Their organisation as a funnel for under-represented communities and minorities to gain access to literature and culture cannot be taken for granted.

Next it was time for some stand-up comedy courtesy of Bilal Zafar. He was nominated for Best Newcomer for his debut show; CAKES at the Edinburgh fringe 2016. He returned to the fringe in 2017 with a sell out run of his follow up show; BISCUIT which was also very well received.

New Act of the Year award winner Bilal joined the company of previous winners such as Stewart Lee, Ardal O’Hanlon, Joe Wilkinson and Linda Smith when he came top of the bill at the 2016 New Act of the Year Awards (previously the Hackney Empire new act of the year award).  In 2015 he was the runner up at the Leicester Square Theatre New Comedian of the Year competition. He has appeared on BBC3, Channel 4, Channel 5, BBC iPlayer, BBC Radio 4, BBC Radio 5 Live, BBC Asian Network, and has written for The Independent and the Guardian.

His hugely entertaining set mocked the racists and Islamophobes often seen trawling Twitter and other social media platforms. The audience was highly amused and his material engaged with the theme on the night.

After a lot of laughs and giggles, it was time for the sombre period of the evening. The hosts took to the stage to raise funds for the organisations varied work and numerous projects. Specific attention was paid to campaigns to raise money for work on Yemen, Nigeria and Myanmar as well as the day-to-day work provided in the form of IHRC Legal and Advocacy services for those who have suffered discrimination.

The next award of the evening was in the ‘UK’ category and sought to recognise those politicians and figures of note within the UK who had flagrantly displayed the most Islamophobia.

The hosts mentioned the ways that the nominees were linked and had influenced each other. The government, the media and right-wing mouthpieces like Tommy Robinson are all factors that contribute towards the environment of hatred towards Muslims. The Conservative Party (with an honourable and special mention to Boris Johnson) was eventually bestowed the ‘UK Award’. Boris Johnson, in the form of a mop, came onstage to accept the award.

Scotland Against Criminalising Communities were next up onstage to accept their Positive Award. Scotland Against Criminalising Communities is a grassroots organisation that campaigns against laws and policies whose effect is to criminalise political and community activity with particular focus on the power of Britain’s anti-terrorism laws. SACC is an organisation that stands against racism, especially state and institutional racism. Over the years SACC’s defence of civil liberties has manifested itself in different ways from campaigns and protests to conferences and events. Their work on the Prevent Strategy, support for refugees and asylum-seekers, commitment to end the excessive use of state powers to criminalise political activity, ceaseless support for Palestine – has all been exemplary. Over the years we have looked to them for inspiration on a range of various topics and projects. We hope in time they will be recognised further as an organisation of note not only in Scotland but across the UK.

Zareen Taj was at the event to accept the award on behalf of Richard Haley and SACC.

The fourth and final category of the night was ‘International’

Before the nominees were announced the audience was treated to a video showcasing the ‘Islamophobia Cruise.’ The video mocked the various Islamophobic politicians that are spread across the globe. From the horrors of Israel and the ISIS territories to government officials in Australia calling for the extinction of Muslims. Bejamin Netanyahu was finally awarded as the ultimate Islamophobe in the category.

While we were able to ‘honour’ four nominees in each category, there were many nominees submitted by the public who did not have their chance in the spotlight. A ‘moment of sadness’ was held in memory of those Islamophobes who had tried so hard over the past year but unfortunately for them, just could not make it.

The final Positive Award went to four select Members of the European. These MEPs have all committed and participated in anti-racism work and work to combat Islamophobia. They are Malin Bijork, Jean Lambert, Sajjad Karim and Soraya Post.

Malin Bijork is a Member of the European Parliament representing the Swedish Left Party – she has taken a very active role in the resettlement of refugees in EU member states and has made individual stances against the deportation of asylum seekers.

Jean Lambert has been a Member of the European Parliament representing Britain’s Green Party since 1999. Her work in the European Parliament has focused on social inclusion, workers’ rights, immigration and social security. As a substitute member of the Committee on Civil Liberties, Justice and Home Affairs she has worked on issues related to asylum, immigration, children’s rights and non-discrimination.

Soraya Post has been a Member of the European Parliament, representing the Swedish Feminist Initiative Party since 2014. In the European Parliament, she is a member of the Committee on Civil Liberties, Justice and Home Affairs and of the Subcommittee on Human Rights. One of Soraya’s priorities is to work against anti-Gypsyism, the special kind of racism that is directed towards Roma people.

Sajjad Karim is a Member of the European Parliament representing Britain’s Conservative Party. He is Vice-President of the European Parliament’s Anti-Racism and Diversity Intergroup and is Chair of their Anti-Islamophobia Working Group. He has consistently voiced his stance on issues facing Muslims across Europe from the ECJ ruling on the right to wear the hijab in the workplace to the hostile environments faced by Muslims in day to day life.

Unfortunately, none of the MEPs were able to be there on the night. However, we were able to play special video messages from both Jean Lambert and Soraya Post. They were both extremely appreciative to have been acknowledged in this manner and sent their thanks. Again, they too conveyed their persistent commitment to tackling Islamophobia and all forms of prejudicial discrimination.

The evening ended on a high as the final award of the evening – Islamophobe of the Year 2018 – was announced. Though there was clearly a vast field to select from, there could only be one winner. Though he was named Islamophobe of the Year 2017, Donald Trump reigned triumphant once again. His ‘Muslim Ban’; violence towards immigrants; relationship with Saudi Arabia and Israel – just a few reasons why he was this year’s ultimate Islamophobe.

On that note, the event was drawn to a close. The evening was a great success – with particular thanks to the volunteers who helped out on the night as well as our sponsors which include: Roch Sweets, Fatima’s Henna Art and Tee Sweets.

You can watch the Islamophobia Awards 2018 online HERE or below.

You can take a look at our album of photos HERE or below. 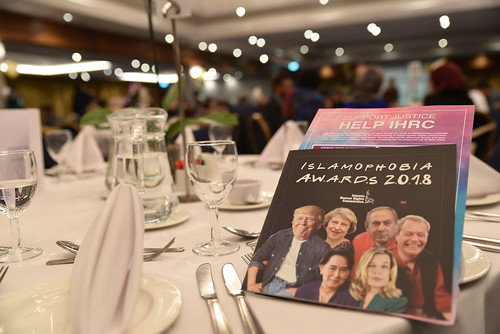