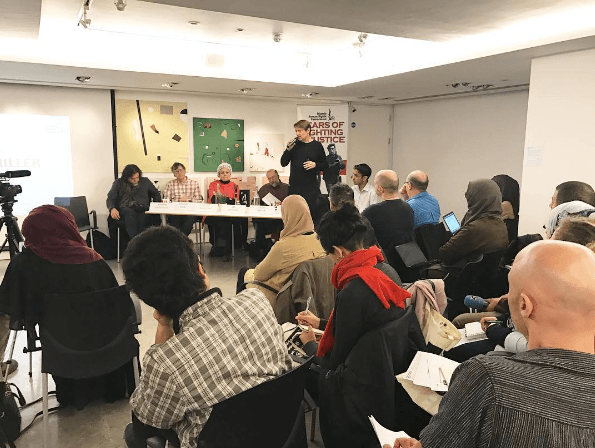 IHRC held its third annual Islamophobia Conference entitled The Environment of Hate and the Police State on Saturday 10 December at the P21 Gallery.  This event was co-organised with Scotland against Criminalising Communities; a parallel conference was held in Edinburgh on Saturday 3 December.

You can read the event report of both events below, as well as find all the videos of both conferences.

Both conferences refocused the energies of activists and academics on the workings of anti-Muslim racism at societal and institutional levels that have resulted in the UK becoming a police state. The panels explored how education, the legal system and the PREVENT / Counter-terrorism regime create an environment of hate that facilitates the operation of a de facto Police State. In this state, citizens are either living in fear and self-censorship, or full and knowing complicity, or exceptionalist complacency or a combination of some or all of the aforesaid. Whilst the primary targets and victims of hateful discourse, discrimination and state and street violence are Muslims, everyone lives in this Environment and this State, many minoritised communities now feel a resurgence of hatred and everyone is impacted negatively.

The afternoon commenced with a wondrous recitation of verses from the Qur’an by Mr Massoomi, followed by a translation by Narjis Khan. The first panel was chaired by Abed Choudhury, Head of Advocacy at IHRC, who also gave a short introduction on the main purpose of the conference: to situate Islamophobia in the wider context of what is happening in the world today.

Our first panel of the day was on the subject of law and the instrumentalisation of Islamophobia. David Miller – from the University of Bath – was the first panel’s keynote speaker. He spoke of how the counter-terror apparatus has expanded right through the public sector and made links with between state-sanctioned, structural Islamophobia and the current climate of hatred on the streets. The extent to which the threat of terrorism is presented by the government and media is completely different to the extent of the threat itself and the fear created as a result is used to further individual agendas. Worse still, those who dare to criticise British foreign policy are left marginalised and isolated. David Miller described the current malaise as a “war on dissent.”

Next to speak was Houria Bouteldja – spokesperson for the Parti des Indigènes in France. Referencing the election of Donald Trump in the US, the EU referendum in the UK and the rise of Marie Le Pen in France; she stated that we were in a ‘pre-fascist period’. Unfortunately the opposition to the Far Right has been extremely disappointing – the Left is white and so reproduces racism. France is the most Islamophobic country in Europe and the Left has been complicit in the state’s decisions for the past 20 or so years.

We were very pleased to have our next speaker from California – Ramon Grosfoguel. He explained that what we are dealing with is a global project that is being coordinated by the Right and the Far Right. The likes of Obama and Hollande have been implementing structural and institutional reforms that give way to the Far Right. This will make it so much easier for someone like Donald Trump once he is in office. What we are facing is the bankruptcy of liberal democracies in the West.

CAMPACC’s Les Levidow followed Professor Grosfoguel as he discussed the pernicious PREVENT strategy. He described the way it creates fear among professionals who want to be seen as during their duty to ‘safeguard’ others. If certain quotas are not met, it is often to their own detriment. The reporting practices of PREVENT itself are based on racist and Islamophobic stereotypes.

Speaker from co-organiser SACC was Richard Haley who stated that as long as Britain was engaged in dirty colonial wars, we can only expect the same dirty propaganda domestically. We are currently living in a police state where individuals are forced to spy and report on members of their own community. We need to act now before things escalate even further. With Richard’s speech, the first panel was concluded and the floor was open for questions. Audience members had been taking notes and there was much insightful commentary on offer as well as questions to help further the discussion.

The second panel focused on Education with Professor Gus John as the keynote speaker. A historic figure within the sector, his speech was both poignant and engaging. He claimed that the classroom’s failure to deal with the legacy of empire has meant that the white working class are unable to understand their beneficial relationship with power. Professor Gus John doesn’t talk about ethnic minorities, but about the global majority. He was also very critical of the PREVENT strategy which he says requires teachers to be spies and completely limits the scope for debate when it comes to young students who simply want to question the world around them.

NUT Officer Rob Ferguson was next up and his experiences within the education system shed a great deal of light on the situation for the audience present. He spoke of how, for years, the public blamed terrorism on the government’s foreign policy failures. Thus PREVENT was created in order for there to a scapegoat and a figure for the public to cast their disdain upon. PREVENT makes it so that Muslims are not allowed to be regular, complex beings – instead you are either a “good” Muslim or a “bad” Muslim.

Initially Nisha Kapoor was to speak at the conference but unfortunately due to unforeseen circumstances was unable to make it. Thankfully Narzanin Massoumi – sociologist and author – was able to take her place and offer insightful analysis and criticism of PREVENT and how it is affecting the education system. She states that it is fundamentally incompatible with the relationship educators have with their students. PREVENT has impacted academic freedom through ‘freedom of speech’ policies, the cancellation of events, web filtering and many other ways.

IHRC’s Arzu Merali – who co-authored the report on hate crime faced by Muslims in the UK – was the final speaker of the day. She spoke on the legitimization of Islamophobic discourse and the ‘othering’ of Muslims. It is constantly said that Muslims lack and threaten ‘British values’ but no one has ever explicitly defined the term. It is a coded way of branding Muslims as different and therefore dangerous. This leads to the further isolation – especially for children in schools.

The second panel then took questions from the floor – discussing how students, parents and teachers can come together to tackle PREVENT; why Muslims shouldn’t have to personally apologise for terrorism and more. The evening was finally drawn to a close by the chair of the second panel – IHRC’s Raza Kazim. He thanked the attendees – community figures, activists, academics and members of the press – for participating, debating and questioning.

The partner conference in Edinburgh organised by SACC, IHRC and MWAE took place on 13 December and focused on similar issues.

The video of the event can be viewed below.