Fair Game: Extra Judicial Assassination and Muslims in the War on Terror 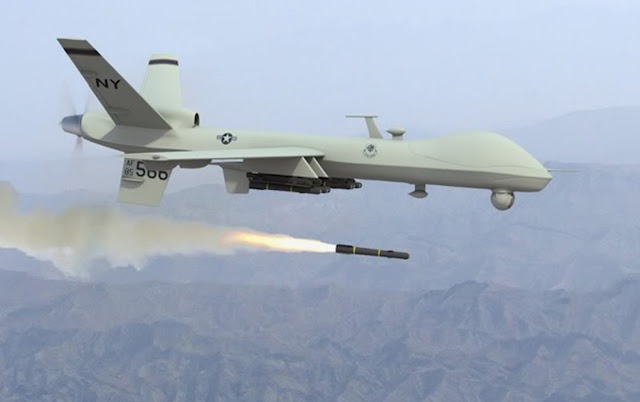 The assassinations of Anwar-Al-Awlaki, his 16 year old son, and Samir Khan, all American citizens, by a CIA drone strike in Yemen in September has ignited a debate (albeit a small one) about the legality of the President ordering the assassination of American citizens in the age of the war on terror. In theory extra judicial murder/assassination is prohibited by the constitution’s due process clause that states no person shall be deprived of life, liberty or property without due process of law. Yet when it comes to fighting terrorism and terrorists the government has assumed for itself a place outside the law and reserves itself the right to summarily execute American citizens it identifies as terrorists. Or perhaps I should say alleged terrorists as it now stands Anwar Al-Awlaki, his 16 year old son and Samir Khan were not convicted of any crime. Al-Awlaki was identified as a threat in a top secret memo containing information from detained persons, themselves identified as terrorists, who were subjected to torture. In Al-Awlaki’s own statements supporting and praising attacks on the United States were also used against him but verbally supporting and praising attacks on the United States is not a capital offense. The government claims Al-Awlaki was operational as a terrorist but without any proof besides statements from persons tortured or detained as terrorists this is hardly convincing.

There are many supporters of the assassination of Al-Awlaki who, I would like to point out, was assassinated on foreign soil (Yemen) that constitutes a front to the war on terrorism and that the United States would never resort to assassination on its own soil yet when the United States military and intelligence agencies have defined the war on terrorism as a global battlefield there are no borders and the front line could be your living room or the back yard. Also domestic assassination is not without precedent in recent American history. One needs only to remember the F.B.I’s Cointelpro (Counter Intelligence) program the agency used against domestic dissent in the United States from the 1950’s to the 1970’s. Under this program F.B.I agent cooperated with local police units called “Red Squads” that targeted leftist activists and militants. These ‘Red Squads’ according to the 1975 Senate Select Committee to Study Government Intelligence Activities (also known as the Church Committee) were responsible for illegal covert actions against domestic groups (i.e American citizens). While the Church Committee could not prove it many activists believed these “Red Squads” were responsible for the assassination of many leftist activists and the F.B.I’s internal memos lend credence to the beliefs as a constant theme throughout the Cointelpro memos is the “neutralization” of perceived threats to the security of the United States. This language is strikingly similar to the language used to justify the assassination of American citizens identified as terrorists based on secret evidence.

When it comes to assassination an important question that has to be asked is what defines the threat to justify the assassination of an American citizen? And where does the threat end? The United States claims its war on terror is not a war against Islam yet everyone assassinated by U.S drones or special force teams have been Muslims. The government claims it does not view the American Muslim community as a threat but an article recently released by the Associated Press in September revealed the CIA is working in cooperation with local police departments in a counter intelligence program targeting Muslim communities that utilizes tactics that sends undercover officers in to minority neighborhoods as part of a human mapping program that monitors daily activities and the use of informants, known as “Mosque crawlers” to monitor sermons in Mosques, even if there’s no evidence of wrong doing. The measures indicate that for the most part the government identifies the entire Muslim community as a threat, not just isolated individuals. It is conceivable that “Red Squads” that once hunted militant leftist and civil rights activists have been replaced by “Green Squads” that now hunt Muslim activists opposed to U.S policies in the Muslim community and the world.

If a Muslim activist states that he or she is opposed to U.S intervention to Muslim countries and supports Muslims waging resistance against foreign interventions in their countries are they a threat to the national security of the United States? If they make these statements abroad or while covering a battlefront in the global war on terror can the government assassinate them? Are they fair game in the eyes of U.S intelligence agencies? Can a Muslim American who supports Palestinian resistance be assassinated? Also what is to stop the United States identifying radical Black, Latino or anarchist activities as threats to national security of the United States? Its not too far fetched to imagine the government already identifies drug cartels as threats to national security of the United States and there are many in law enforcement circles who are pushing for urban street gangs to be identified as “Urban terrorists”. The term threat can be identified so broadly by the Justice Department attorneys that abuse and/or mistake the inevitable. These abuses or mistakes however will be fatal.

Another disturbing aspect of the governments policy of assassinating American citizens is once a citizen is designated a threat and placed on the assassination list he or she has no remedy to challenge their placement on the assassination list. They cannot challenge the evidence and the whole process for the most part is top secret. When Anwar Al-Awlaki’s family filed a law suit to prevent the government from assassinating their son the federal court dismissed the lawsuit on the grounds the family did not have the standing to file the lawsuit and that if Al-Awlaki wanted to be removed from the assassination list he would have to turn himself in to a United States court or embassy. A suggestion that is absurd considering he was essentially on a kill on sight list. Setting aside the absurdity of the suggestion one has to be somewhat amazed at a United States judge being so unsympathetic to the assassination of an American citizen by his own government based on secret intelligence. It is as if the court’s have become cheerleaders of an Imperial Presidency where behind closed doors the President can order the assassination of American citizens without any checks to his power.

Of course at the end of the day most people don’t care about this because Al-Awlaki was a “bad guy” (and a Muslim at that) but what about his 16 year old son killed by a CIA drone strike in Yemen two weeks after his father was killed. His only crime? Seeking to retrieve the body of his father for burial. The government claims he was in the company of a Al-Qaeda operative who was the target of a drone strike as if that justifies his murder. What about Samir Khan, the other American citizen who was killed in the strike on Al-Awlaki? His crime? Producing an internet magazine for Al Qaeda. Is propaganda a capital offense? When I last checked it was not. Most Americans don’t care about this because they believe that it could never happen to them or someone they know. Also most Americans, particularly white and rural, have become timid sheep, cowed in to believing they must surrender their freedoms for government protection. This is why there is no outrage at the assassination of three American citizens within a two week period by the government nor can we expect any outrage at future assassinations. Al Awlaki was “the other” in a long line of others Americans have historically become accustomed to fearing that including Blacks, Native Americans, Immigrants, Youth of Color, and now Muslims. Also these “Islamic” terrorists are easy to dislike, by both the political right and left (and radical left) so the lack of outrage and condemnation over the assassination of Al-Awlaki is not surprising.

If the American public wants a government that believes that end justifies the means then they certainly have been granted the government they want and deserve. In the celebration of Al-Awlaki’s assassination by a predator drone missile strike the United States believes it has eliminated a mortal threat but while the drones have killed a couple dozen militants, in the process they’ve murdered thousands of innocent civilians within the Islamic world. To the innocents on the other side of the attacks who is the terrorist? When the politicians, lawyers and pundits support these attacks who are the supporters of terrorism? When the end justifies the means the lines become blurred and it becomes difficult to distinguish between those allegedly committing terrorism and those allegedly fighting terrorism, as well as between citizen and combatant. One needs only to look at the example of Al-Awlaki’s 16 year old son. His only crime? Seeking to retrieve the body of his assassinated father for proper burial. Who will retrieve his boy?