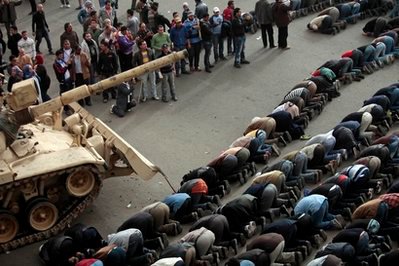 Hosni Mubarak’s predecessor Anwar Sadat once described fear as “a most effective tool in  destroying  the soul of an individual–and the soul of a people.”

It is a theory which most rulers in the Arab world have subscribed to for decades and implemented to terrifying effect upon their citizens. So horrific is the manner in which the people of the Arab world have been abused by their leaders that they have been brutalised into silently acquiescing to their own enslavement. Corruption, despotism, poverty coupled with torture and indefinite detention without trial have left the Arabs afraid and humiliated. Generations have been born, raised and buried in these police states where concepts such as freedom and liberty simply do not exist in the vocabulary of the inhabitants of the region. Dictatorships and tyranny are all that they have known.

So miserable was the plight of the Arab people that they had lost the will to struggle for social, political, and economic reform. Alongside their fear came pessimism and apathy. For the Arabs, the difficulty was not that the future was bleak; it was that there was no future. Envisioning freedom and liberty was a dream not worth dreaming. Fear is one of those emotions that if you are unable to overcome it, you become enslaved to it and obey it without question, thereby allowing your plight to continue. The Arabs have for decades suffered from this illness and been shackled by their own cowardice in the face of the oppression they faced.

But now something astonishing is happening. The people of the Arab world have woken up. Starting in Tunisia and infectiously spreading to Egypt and Yemen, people have managed to control and conquer their fears. Once you conquer your fear, you automatically deprive your enemy of the ability to hurt you. The moving scenes this week of emotional crowds chasing the highly feared riot police showed us all that a generation of repressed people were conquering their fears. Defying curfews, marching in solidarity and refusing to submit to the authorities, the Arab people have had enough. With the overthrow of Ben Ali in Tunisia, people realised that the ability to change the status quo was in their own hands. Unprecedented demonstrations have been taking place in Egypt and Yemen with it looking very likely at time of writing that Mubarak will share Ben Ali’s fate. Clearly nervous about the possibility of domino style revolutions in their own countries, King Abdullah of Saudi Arabia and Colonel Qaddhafi of Libya have condemned the demonstrations with the former suggesting they are the work of “infiltrators”. It is unclear at this stage who will come to power in these countries should the regimes be overthrown and what their ideology or politics will be, but we should celebrate the fact that the people of these lands have broken the fear barrier in their minds and can ultimately now move forward.

In 1989, Europe experienced a wave of anti-Communist revolutions beginning in Poland, spreading to Hungary, East Germany, Bulgaria, Czechoslovakia and Romania, and which ultimately led to the dissolution of the Soviet Union. It was a historic year and the beginning of a new era of freedom and advancement for these countries. Will 2011 be the Arab’s 1989? One major difference though is the lack of endorsement for the revolutions in the Arab world by Western governments who have propped up, financed and supported dictators such as Mubarak and Ben Ali throughout their tyranny, aware that any true democracy in the Arab world is likely to lead to Islamically-inspired governments coming to power, who would work for the interests of the people, not the West. It is for this reason that Western leaders have been very moderate in their statements in support for the Arab revolutions, working to ensure they are not successful while ostensibly maintaining a semblance of balance. They have called for peaceful protests and for an end to the violence on both sides, as if there can some sort of equivalence between the oppressor and the oppressed. Maybe Obama and others should recall the words of former US President, John F. Kennedy, “Those who make peaceful revolution impossible, make violent revolution inevitable”.

It is also noteworthy that their criticisms of Mubarak’s rule are focussed on economics, unemployment and freedom of expression while blatantly ignoring the sadistic torture and abuse inflicted upon political detainees in Egyptian dungeons for 30 years. There has been an embarrassing silence from all quarters about this primary grievance of the Egyptian and Tunisian people. Perhaps, that is because much of the abuse was done at the behest of the American and British governments, who would often send their suspects there. As a former CIA agent Robert Baer once said, “If you want a serious interrogation, you send a prisoner to Jordan. If you want them to be tortured, you send them to Syria. If you want someone to disappear – never to see them again – you send them to Egypt.”

But of course, the revolutions have nothing to do with that. It’s the Arabs, stupid.

Fahad Ansari is a researcher and spokesperson for the Islamic Human Rights Commission where he specialises in anti-terror legislation. He is the author of numerous reports including, “British Anti-Terrorism: A Modern Day Witch-hunt“. He is also a solicitor at TRP solicitors and a member of Cageprisoners.