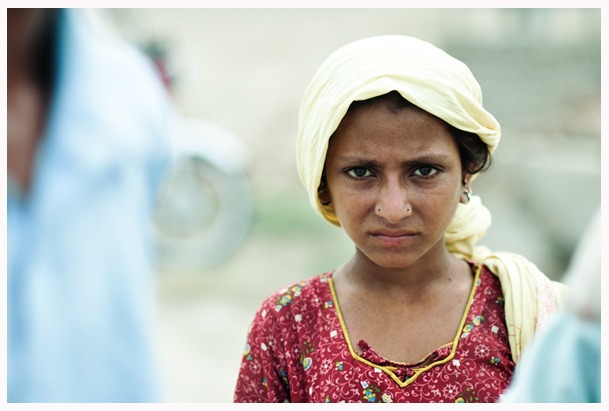 Facebook
Twitter
LinkedIn
WhatsApp
Email
Amana Sajid walks into the hospital holding her lower back. Shabeena Begum, a health worker, takes her hand and makes space for her on the bench in the doctor`s room.
The room is swamped with women carrying babies and young children attached to their arms and legs. Amana pulls back her burka and pats her small protruding belly as she talks to the health visitor. She says she isn`t sure of her exact age and smiles shyly. She thinks she is either 16 or 18 years old.

Amana carried her first child for three months before miscarrying and is at the clinic in Pir Sabaq, Nowshera, in the Khyber Pakhtukhwa province. Concerned about the health of her six-month unborn baby, Amana`s hands covered in henna patterns motion to the health visitor where she is in pain. Her back and abdomen hurt and she can only feel faint movements from her baby every three days.

Pir Sabaq like many villages in the province felt the full force of the worst floods in Pakistan`s history. Large areas of the village look like they`ve been flattened by an earthquake; hundreds of homes are now piles of rubble and dust. Amongst all, a UK-based medical organisation is providing urgent medical care to women like Amana, who are pregnant and have nowhere else to turn. The charity set up a health clinic in Ganderi and Pir Sabaq days after the floods.

Women walk for up to six hours to reach the hospital and seek medical treatment from Dr Hasiba Tarin and two female health workers. On average, 250 patients a day arrive at the clinic.

“The women are stressed about their pregnancies, hoping and praying their babies will be delivered healthy and the men are stressed sitting inside all day wondering how they will manage to survive with no job or money.

One woman came to the hospital and said since the floods her husband had gone mad. She says all he does is sitting inside the house and screaming,” says Shabeena.

Dr Tarin is the only female doctor in the district of Nowshera and takes care of the health of thousands of women. “Around 40 per cent of pregnant women give birth prematurely, most at least one or two month prematurely. I have seen many cases of women miscarrying and a high number of women giving birth to stillborn babies since the floods,” says Dr Tarin.

I walk through the dusty backstreets of Pir Sabaq to meet Fateh Ali, a traditional birth attendant who has been delivering babies in Pir Sabaq for 40 years. I asked her how many babies she has delivered. She smiled and raised her hands and chuckled `thousands.`

Fateh Ali says her hands are like an ultrasound. All she has to do is touch a woman`s belly and she knows which position the baby is and when the woman will give birth. She bounces through the streets excited, as she wants me to meet a baby that she delivered three days ago. Ambar Ajmal is wrapped up warm in blankets next to his mother Zahida, 18. This is her first baby and she is exhausted by the birth.

Zahida was heavily pregnant when the floodwater came. She says the water had reached her knees when her family decided they must all leave and travel to Raisul Pul, a town near Nowshera.

Fateh Ali points to Ambar`s neck. The baby has a rash but he also appears to have a deformity.

She hands him back to his mother and says the family will need to take the baby to see a specialist doctor to understand his medical condition.