Forwarded Alert: UK – Notification of events for the tenth anniversary of Guantanamo 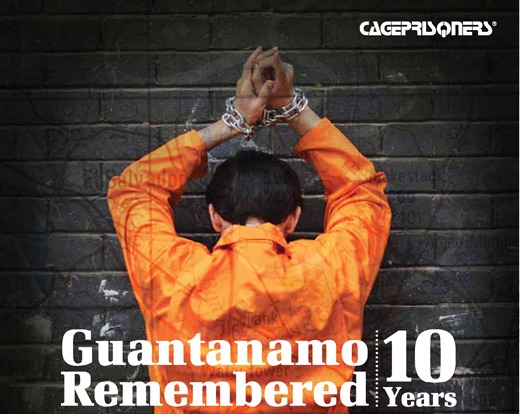 LaaTansa is a major online project that has been undertaken by CagePrisoners in order to provide the most complete picture of Guantanamo to date. The press conference will provide media the opportunity to interview a large host of former Guantanamo detainees, their lawyers and families who will all be present at the event.

On the tenth anniversary of Guantanamo Bay’s opening, CagePrisoners, Reprieve and the Islamic Human Rights Commission will co-host an event in order to reflect on the impact of a decade on the lives of those in Guantanamo and their families.

1. Guest speakers at the press launch and event includes:

Media enquiries for interviews with the above guests can be directed to CagePrisoners at the contact details below.

2. CagePrisoners is a human rights NGO that exists to raise awareness of the plight of the prisoners at Guantanamo Bay and other detainees held as part of the War on Terror. We aim to give a voice to the voiceless.