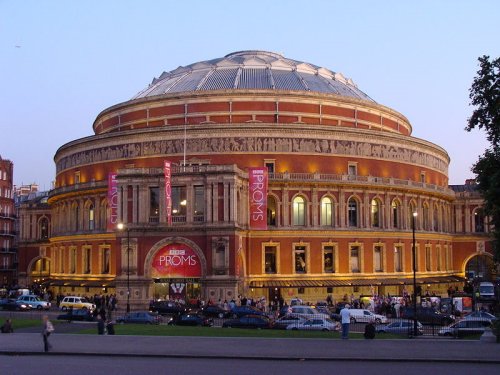 “We thought we’d liven up the Webern a bit” said Deborah Fink  (soprano).”The performance of Beethoven’s 9th Symphony at the previous night’s Prom was so exciting that we decided to treat the audience to our own version of the Ode to Joy”.

The lyrics of the BBI’s “Ode to Boycott” have an unmistakeably Beethovian ring:

There’s no peace on stolen land.

We’ll sing out for liberation

’till you hear and understand.

Should belong to history.

Palestine will soon be free.

A performance of the piece, recorded earlier by the BBI Chamber Choir, can be heard here:

Sue Blackwell (alto), who penned the alternative lyrics, said: “We think Ludwig would have approved.He was known to be a bit of a subversive who had no time for conventions, and he admired the French Revolution with its themes of ‘Liberty, Equality,  Fraternity’.Sadly, Israel represents the exact opposite of those ideals.”

During the second piece, Bruch’s Violin Concerto, and in Albėniz’s “Iberia” after the interval, BBI duos and trios took part in the Proms charitable tradition of synchronised slogan-shouting, including “THE SIEGE OF GAZA – IS OUT OF TUNE – WITH INTERNATIONAL LAW” and “THE IPO – ARE INSTRUMENTAL – IN AN ILLEGAL OCCUPATION”.

The BBI recital was somewhat curtailed on this occasion due to its members being removed by the Albert Hall security staff, so that they had to continue outside. However, they are intending to build on their Proms success and are now looking for a suitable venue for their next performance.
[ ends ]

Naomi Wimborne-Idrissi (soprano) of Jews for Boycotting Israeli Goods, who was one of the choral performers, said: “All this precious talkabout the purity of the music ignores the toxic nature of Israel’s suppression of the Palestinian people.”

Willem Meijs (tenor, aged 70) said: “As someone steeped in classical music from an early age, and a frequent visitor to the Proms since the fifties, I was very hesitant about disrupting a concert in such a hallowed venue. However, I thought inviting the Israel Philharmonic Orchestra was a provocation in its own right.

So I felt voicing a peaceful protest during their concert would be nothing compared to the bombing of innocent civilians and the slow but steady genocide inflicted on the Palestinians by the state of Israel, of which this orchestra claims to be a cultural ambassador.”

‘I do not believe that a State that maintains an occupation, committing on a daily basis crimes against civilians, deserves to be invited to any kind of cultural event. That is, it is anti-cultural; it is a barbarian act masked as culture in the most cynical way. It manifests support for Israel, and … that sustains the occupation.’

1. An open letter was sent to the Proms organisers on July 18^th by PACBI, the Palestinian Campaign for Academic and Cultural Boycott of Israel.PACBI referred to “the IPO’s complicity in whitewashing Israel’s persistent violations of international law and human rights”, mentioning specifically the IPO’s services to the Israeli army dating back to the ethnic cleansing of the Nakba in 1948 and the occupations of 1967, and continuing up to the present day: “the IPO proudly announces its partnership with the army under a scheme whereby special concerts for Israeli soldiers are organized at their army outposts”.On behalf of the leading Palestinian musical and cultural organisations, PACBI called on the BBC to withdraw its invitation to the IPO.http://www.pacbi.org/

2. The British Committee for the Universities of Palestine, BRICUP, also wrote to the BBC calling on it to cancel the invitation.http://www.bricup.org.uk

3. Unknown to the Proms organisers, the protesters had bought over 40 tickets in a variety of locations in the Royal Albert Hall, including boxes.A group of fifteen were seated in the choir.During the Webern piece the “choir” stood up with letters spelling out “FREE PALESTINE” and sang the “Ode to Boycott” repeatedly until they were removed.When a further group of protesters shouted slogans as the Bruch piece was about to begin, the BBC suspended their live transmission on Radio 3.The BBC attempted to recommence after the interval, but further groups of protesters shouted slogans at the start of the Albėniz piece.At this point the BBC stopped live transmission for the rest of the evening.This is believed to be the first occasion when transmission of a Prom has been disrupted by protesters.

4. All the protesters left peacefully when requested to do so by security.There were no arrests.Some of the protesters were assaulted by members of the audience but they did not retaliate.

5.Footage of the demonstration and pro-Israel counter-demonstration outside the Hall can be seen here:http://www.youtube.com/watch?v=Cf1ZTIvVKSw