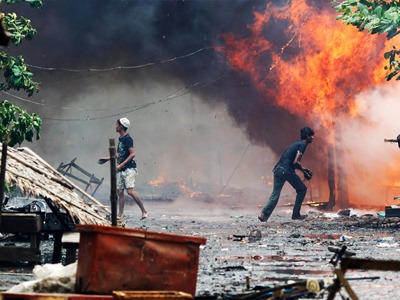 Citizens International strongly condemns the recent brutal murder of 10 innocent Rohingyas by the Rakhinese extremists and the failure of the authorities to protect the Rohingya civilian population.

According to media reports, the killing was triggered by the alleged rape and murder of a Rakhinese girl by three Rohingyas.  The Myanmar police should have acted quickly and investigated the alleged crime and prosecuted the perpetrators instead of allowing the Rakhinese extremists to take the law into their own hands and take revenge on the Rohingya community.

According to reports received by Majlis Perundingan Pertubuhan Islam Malaysia (MAPIM), the attack and violence against the Rohingya has spread to many parts of Arakan including its capital Akyap.  The extremists have set fire to many villages and emptied them of the population.  Instead of preventing the violence and arson against the Rohingya community, some members of the security forces have been colluding with the Rakhinese criminals.
The Rohingya community has faced discrimination and persecution from the Myanmar military regime for over 60 years.  Hundreds of thousands of Rohingyas have been forced to flee their homes and are now living as refugees facing grave hardship in Bangladesh, Malaysia, Saudi Arabia and other countries.

With the dismantling of the military regime and the revival of democracy in Myanmar, Rohingyas must be treated as citizens having equal rights with the other ethnic groups.  The Myanmar government must encourage the Rohingya refugees to return to Myanmar and resettle them there.

Aung San Suu Kyi and her National League for Democracy must condemn the racism practiced against the Rohingyas and initiate a dialogue with their leaders to rectify the historical injustice done to them by the military regime.
The plight of the Rohingya community should be discussed at ASEAN meetings and an amicable solution found to put an end to their decades long suffering and statelessness.

We call on the: