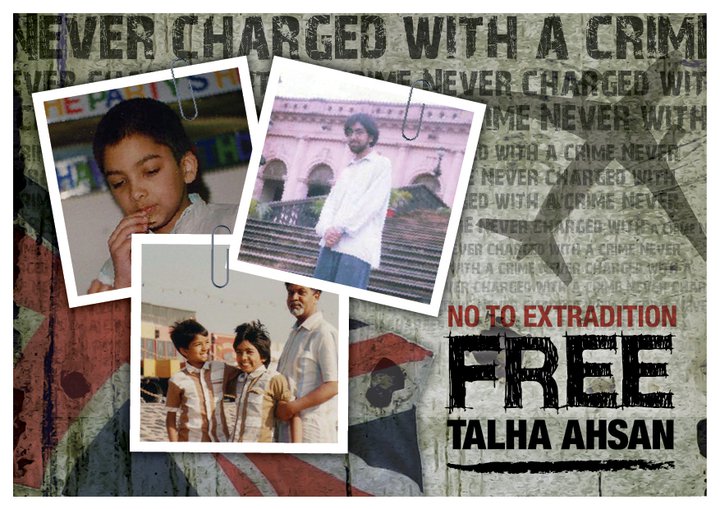 British citizen Ahsan was detained in 2006 on an extradition warrant from the US in the same case as Babar Ahmad.

The event organised in conjunction with the Islamic Human Rights Commission, (IHRC) will be held at their bookshop and gallery in North West London, on 19th July. Speakers include leading Human Rights lawyer Gareth Pierce, who represents Ahsan, and veteran peace campaigner Bruce Kent.

The anniversary event follows the launch in February this year of his book, “This Be The Answer: Poems From Prison”, supported by award winning novelist A. L. Kennedy. She has described his work as “great poems, strong beautiful stuff”.

“Never were justice and the law so out of sync as in the case of Britain’s rotten extradition arrangements. No one should be sent anywhere – be it the US, Europe or elsewhere – without good reason and without a case first being made in a local court.

Event organiser, Arzu Merali said “Talha’s case is yet another outrage of the so-called anti-terrorism regime that has ruined so many thousands of lives in the UK.  As a poet, Talha is placed to expose his plight and that of others through his work, and this evening we will be celebrating his talent and courage in the face of injustice.”

Admission is free. To book a place, please call 02089044222 or email events@ihrc.org, or leave your name and details in store. Refreshments will be served.

1.  Photographs and footage of the event will be available from the Free Talha campaign.
2.  Talha Ahsan, 31, British Citizen was arrested under the controversial Extradition Act 2003, for the same terrorist allegations in the US as the long standing Babar Ahmed case. He is currently in the final stage of proceedings at the European Court of Human Rights. He denies any wrongdoing. For further information please visit http://www.freetalha.org