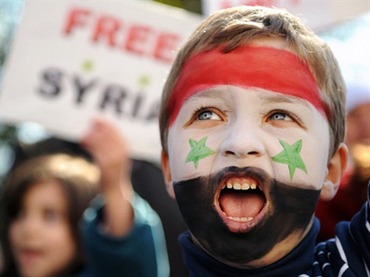 1. Obama Should Shut Up

Obama’s claim that the Syrian regime is receiving Iranian assistance to repress protests is a statement which could inflame sectarian hatred inside Syria, as Obama’s Zionist advisors know very well. (This because Iran is Shia, a target of Saudi-Wahhabi propaganda, and the Syrian dictator is an Alawi, whereas the majority of Syrians are Sunnis).

Obama gave no evidence to support his claim. The regime may be using Iranian bullets and tear gas. The Egyptian, Tunisian, and Libyan regimes have recently used American bullets and tear gas against their respective peoples. And America has offered its full support to the Saudi occupation of Bahrain and the Khalifa reign of terror there, which includes midnight arrests, extrajudicial executions, the destruction of Shia mosques, and assaults on hospitals and medical staff.

The United States continues to assist the same dictatorships it has assisted for decades, and to function as the lifeline of the Zionist apartheid state. Obama’s statement could be a message to the Asad regime: if you distance Iran and the resistance, we will help you survive this crisis. But the Asad regime knows its only popularity arises from its support of resistance. Alternatively, Obama may have decided that Bashaar will fall, and the message is to the Syrian people, to encourage sectarian hatred amongst them and make it more difficult for them to build a stable, inclusive nation after the Asads capable of confronting the Zionist project.

2. So Should Ghassan Bin Jedoo.

This Jazeera Arabic presenter resigned after accusing the channel of inciting rebellion rather than reporting the news. This must have something to do with his ties to the Syrian regime (or he may have been threatened, in which case I apologise for my harshness). Jazeera covered the revolutions in Tunisia, Egypt and Libya much more enthusiastically than they are covering Syrian protests (and the channel had much better access in those countries than it does in Syria). If Bin Jedoo had wanted to resign on principle, he should have done so weeks ago when Jazeera Arabic went quiet on the Bahraini uprising, or worse, supported the repression and aired the sectarian rantings of Yusuf Qaradawi. I don’t blame the professional journalists of al-Jazeera for this, by the way, but the pressure upon them from the Qatari regime.

4. On Purpose or By Accident?

I wrote in January that the Syrian regime would not fall. I still can’t see how it could fall – the army and many elites are co-opted, very many people are scared of change – but now I can’t see how it can survive either. If free presidential elections had been held two months ago, Bashaar might have won. Not anymore. The regime is digging its own grave and bringing the country closer to civil war with every bullet it fires. This is not an anti-regime comment, but a statement of fact. So long as the cycle of funerals and killings continues, the uprising will escalate.

You can’t expect people to be calm when they are being murdered. On whatever side of the argument Syrians currently find themselves, we should all be able to understand this obvious logic. Blood leads to escalation. Blood will lead to blood.

In Hajar al-Aswad, a demonstration of 300 grew to a demonstration of 4000 after security forces killed a Beduin tribal leader. Murdering the people is not in anyone’s interest. Is there no-one in Bashaar’s inner circle who understands this? Twenty people, including young children, were killed in the village of Izra’a over the last couple of days. Izra’a is near Dara’a, in an area where the people are tribal and have access to weapons. Does the regime want to create a real armed challenge, so it has the excuse to do a Hama? Or is it still blundering and panicking?