FRANCE: Concerns Regarding the Violation of CEDAW by the Banning of the Islamic Headscarf and other religious symbols in schools

Home
Reports and Books
FRANCE: Concerns Regarding the Violation of CEDAW by the Banning of the Islamic Headscarf and other religious symbols in schools 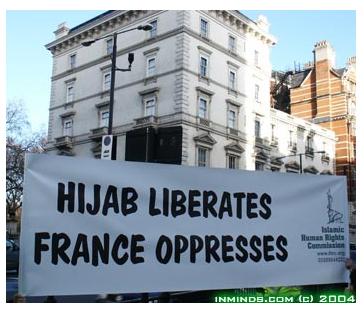 This report was submitted to session 40 of CEDAW at the United Nations in Geneva in January 2008.

The full report can be downloaded from the end of the page or here.  The Executive summary follows.

IHRC takes issue with the French government’s claim in its sixth report that the 15 March 2004 Act was implemented in pursuance to its commitment to promoting the equality of women and eliminating discrimination against them.  Not only are the effects of this law (and other similar laws and policies) demonstrably and catastrophically opposite to this claim, the French government’s own discourse surrounding this ban and other such laws and policies has hitherto been grounded mainly in a debate about integration, assimilation, and a very recent and particular interpretation of laïcité.

IHRC’s overall recommendation is to repeal the 15 March 2004 Act and other such laws and policies.

Measures to Eliminate Discrimination: Convention Article 1
IHRC notes that of the 220,000 recorded discrimination cases in France in 2006, only 43 went to trial.  The possibilities within this prevailing legal culture of a successful challenge through the courts by a litigant with regards to her exclusion from school, is not encouraging.

IHRC’s overall recommendation is to repeal the 15 March 2004 Act and other such laws and policies.

Activists and NGOs complain regarding HALDE.  Notaby, that:

Guarantee of Basic Human Rights and Fundamental Freedoms: Convention Article 3
The ban involves the intersection of a number of human rights, however the promotion of human rights was not explicitly cited in France’s report as being a reason for it.   Prevailing discourse and policy has the effect of denying Muslim women who wear scarves agency, and disempowers them.

Recommendations
In addition to repealing the ban, IHRC recommends that a process of dialogue between Muslim women who wear the scarf and their chosen representatives with government and public institutions be initiated by government.

Sex Role Stereotyping and Prejudice: Convention Article 5
IHRC notes that stereotypes of Muslims in particular those who wear the headscarf are often promoted by government, and public figures.  This stereotyping has been seen in judgements in discrimination cases.

Recommendations
IHRC urges CEDAW to impress upon the French authorities the importance of projects in tackling discrimination against women of colour.

Courts and lawyers need to be trained in effective anti-discrimination norms that reflect stereotyping across the board.

IHRC notes NGO and activist concerns with the make up and selection procedures used by the government in the formation of institutions, as being invasive and unrepresentative.

The French government needs to open up sincere, representative and diverse lines of communication with women from minority communities.

Some women who wear the headscarf are prevented from becoming French nationals.  Likewise some are refused residency or ID cards.

Recommendations
The wearing of the headscarf must not be used as a criteria for refusing nationality, residency or ID cards to women, and this should be the standardised policy implemented across the regions.

Women whose applications for nationality etc. were rejected on these grounds must be given recourse to redress.

IHRC notes that there is no empirical data provided to back the government’s case that the ban, as it argues prevents truancy, confinement to the home or lack of equality between the sexes and (b) how such a ban would impact on such practices.  On the contrary, in its practical effect, according to the grassroots NGO, the March 15 Freedom Committee (writing in 2005), a total of 806 young women and girls are estimated to have been affected by the law.  Further IHRC notes that the French government hailed the ban as a success because it had curbed ‘Islamic fundamentalism’.

Employment, Health, Law and Marriage: Convention Articles 11, 12, 15 and 16
IHRC notes that women excluded from education as a result of the ban on religious symbols, will subsequently face greater problems in securing employment and that such a ban violates not only Article 10 in this respect but also Article 11.

IHRC notes the reports of a rise in religious intolerance against women outside the school context.  IHRC further notes the working of the ban in public and private sectors other than schools, including women banned from crèches, banks and human rights organisations, and dismissed from work in the public and private sectors.  In one case, women wearing headscarves were barred from attending a doctor’s clinic.  Women wearing hijab have been removed from juries.  This refers to various articles including in some respects Article 15.  Women wishing to marry have been asked to remove their hijab, or denied entry to places of civil registration of they refuse.  This violates Article 16.

A more robust understanding of anti-discrimination needs to be taken on board by the French government.

A systematic review of how many cases that have gone through the courts or been settled outside with regard to discrimination faced by Muslim women, etc. is needed, and measures and policies that facilitate headscarf wearing women’s role in the public and private sectors implemented.

Court officials, judges and lawyers need to be trained in effective anti-discrimination practices that ensure the spirit of anti-discrimination is consistent in judgements and cases, and that women are not excluded from work for their choice of dress.

Medical practitioners need to be trained to uphold the Hippocratic oath.

Sanctions against medical practitioners who refuse treatment to women must be implemented.