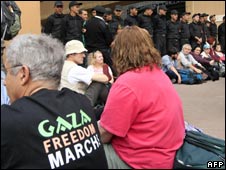 Hundreds of people in Cairo have been prevented from getting close to the border with Gaza.

A group who got as far as the Sinai port of El Arish have been detained by the Egyptian police.

A separate convoy of vans delivering medical supplies is stuck in the Jordanian port town of Aqaba.

At least 38 people of various nationalities were picked up by Egyptian security services in El Arish and held in their hotel rooms, AFP news agency reported.

In Cairo hundreds of activists are camped outside the United Nations mission in Cairo trying to get them to pressure the Egyptians to let them cross the border with the Gaza Strip.

“I’ve never done this before, I don’t know how my body will react, but I’ll do whatever it takes,” 85-year-old Hedy Epstein told AFP.

The American activist is a Holocaust survivor, the agency reported.

Meanwhile a convoy of vans carrying supplies which travelled all the way from London to Jordan has been told by Egyptian officials it must go all the way back to Syria to get into Egypt.

The “Viva Palestina” convoy, led by British MP George Galloway, has been blocked from getting on a ferry from Aqaba to the Egyptian town of Nuweiba where it planned to continue by road to the Rafah border crossing.

But now the convoy faces a potentially budget-draining journey back through Jordan to the Syrian port of Latakia, followed by several ferries to El Arish.

Earlier in December, Egypt rejected a request to allow activists to march across the border into the Gaza Strip to mark the anniversary of last year’s conflict.

The Egyptian foreign ministry said the march could not be allowed because of the “sensitive situation” in Gaza.

Over 1,000 activists from 42 countries had signed up to join “the Gaza freedom march” to mark the anniversary of the Israeli military incursion into Gaza last year.

Palestinians and human rights groups say more than 1,400 Gazans were killed in the 22-day conflict that ended in January, but Israel puts the figure at 1,166.

Gaza is under a tight Israeli and Egyptian blockade, tightened since Hamas took over the strip in 2007.

Most medicines are allowed into the territory, but their transfer can be slowed by Israeli and Palestinian bureaucracy, and the entry of medical equipment and other supplies is limited.

The World Health Organization says that at the end of November 2009, 125 of 480 essential drugs were at “zero level”, meaning there was less than one month’s stock left.

Israel says the military operation was – and the continuing blockade is – targeted at Hamas, not Gaza’s civilians.

The Islamist movement has controlled Gaza since June 2007, and has launched thousands of rockets and mortars into Israel in recent years.