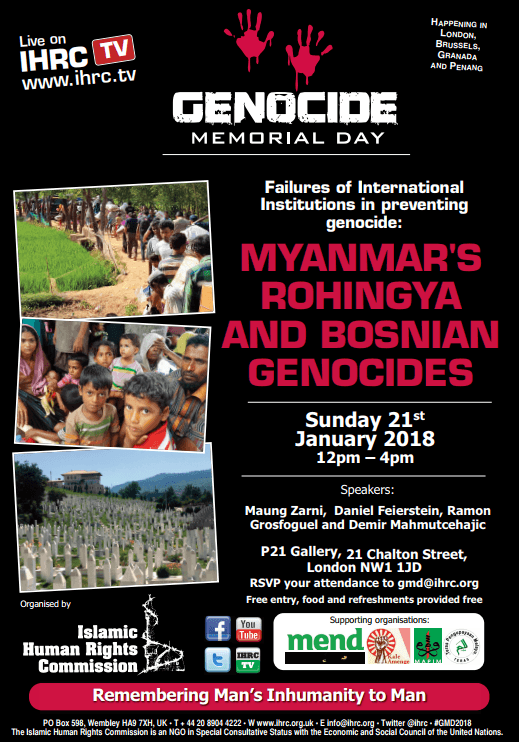 The theme of this year’s GMD is Failures of International Institutions in preventing genocide: Myanmar’s Rohingya and Bosnian genocides

CONFIRMED SPEAKERS:
Maung Zarni – Genocide scholar and Burmese human rights activist
Ramon Grosfoguel – Professor at the Department of Ethnic Studies, UC Berkeley
Daniel Feierstein – Director of the Centre of Genocide Studies at the National University of Tres de Febrero in Buenos Aires, Argentina and Professor at the University of Buenos Aires
Demir Mahmutcehajic – Bosnian activist and co-founder of Islamic Human Rights Commission
GMD began in January 2010 with the convergence of two ideas. The first necessity was to counter the idea that some genocides are more extraordinary than others and therefore worthy of greater attention. The second necessity was that this wouldn’t just be a theoretical remembrance but begin to identify current genocidal practices with a view to stopping them.
IHRC is a campaigning organisation, we believe it is important for us to not just commemorate the past but also to recognise the genocides and/or genocidal acts taking place in the modern era, with a view to stopping these from happening in the present or the future. The philosophy of this project by IHRC rejects the notion that there is a hierarchy of victim depending on their background. By highlighting the people and power structures who have perpetrated genocides or genocidal acts, we want to hold the perpetrators to account within the framework of GMD, as well as remember the victims of these genocides and genocidal acts.
The situation of Rohingya Muslims is really grave and undoubtedly, a genocide is taking place in Myanmar’s Rakhine state. The United Nations has ‘expressed deep concerns’ and the levels of violence have increased day by day.
Genocide Memorial Day will be a great opportunity to ask to our renowned speakers different questions such as the difference between ethnic cleansing and genocide; about the silence of the international community and Aung San Suu Kyi in the Rohingya crisis; what lessons have been learned from the Bosnian genocide; the failures of International Institutions in preventing genocide and much more!
If you are affiliated with a school that would like to commemorate GMD, lesson plans and further resources are available here
CLICK HERE FOR THE 2017 GENOCIDE MEMORIAL DAY EVENT REPORT and click here for our archive of event reports and click here for more info and resources on GMD
Watch the event live online on IHRC.TV – you can send questions to the panel via Twitter @ihrc using the hashtag #GMD2018 or by posting on our Facebook page
GMD2018 – Brussels
Genocide Memorial Day is also taking place in Brussels on Saturday, 20 January 2018 – click here for more information
{jathumbnailoff}