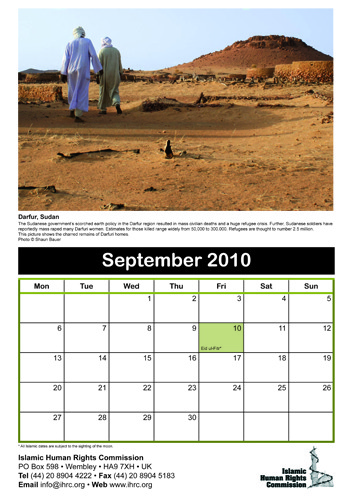 Facebook
Twitter
LinkedIn
WhatsApp
Email
There has been international outcry against the systematic killings of thousands of indigenous Darfurians.  According to UN statistics more than 300.000 have been killed and 2.7 million have been displaced between years 2003 to 2005. The conflict engulfed the entire region and the border areas and considered to be one of the biggest human catastrophes in the 21st century. In 2005 a peace deal initiated by the international community has ceased the bloody conflict between the forces of Sudanese government and the Sudan Liberation Army and Movement (SLA/M) and the Justice and Equality Movement (JEM).  Yet it failed to improve the humanitarian disaster and egregious crimes that are committed against Darfurian people remained unpunished.

Darfur is the biggest region located in the Western Sudan. There are two main ethic groups dwell in the region: indigenous black-African groups and nomadic groups of mixed quasi-Arabic origin [1]. The both ethnicities predominantly adhere to the Islamic faith and Arabic speakers. Historically the region enjoyed an independent state under the name of Sultanate of Darfur. However, a colonial British interference resulted in Sultanate of Darfur’s annexation to the present day Sudan.

Tribal traditions and ties strongly kept in the region. Leading tribal groups have been playing a great role in the socio-economic system of the region.

Darfur is a key asset for Sudanese government. Aside from its proportional significance; (Darfur makes up a fifth of Sudan) Darfur hosts a great wealth of underground minerals including oil fields. It is also important in terms of production of livestock for the country. Fertile soils of Darfur and huge water sources allow it to hold 25% of Sudan’s livestock population and provide 30% of exported live stocks.

Despite its natural wealth, however, Darfur has been neglected by the government thus has been the most underdeveloped region of Sudan. The Government has a keen interest in exploiting Darfur’s natural wealth but reluctant to improve the infrastructure of the region. This is due to their suspicion about socio-political influence of the tribal groups that have been considered as a threat to the authority of the central government. So there has been a deliberate attempt to curb the influence of the indigenous African tribes and insert the authority of the government.

An IHRC briefing aimed in exposing the true nature of the conflict identified four major factors that led to up rise of the people of Darfur which eventually cost one of the dreadful genocides in the human history.

Mass migration following natural disasters and systematic government policies that aimed at reducing influence of the indigenous Africans through supporting nomadic Arab tribes has been building up tension in the region. The tension gave rise to sporadic rebellions led by the indigenous Africans which have been suppressed with utter brutality by the government forces.

The civil war has claimed many lives in Darfur. According to independent accounts between 1983 and between 2005 around 1.5 million people got killed.  In the recent wave of the violence took place in 2003 to 2005 around 300.000 have been killed and 2.7 million have been displaced.  According to UNICEF around 4.7 million people have been directly affected by the conflict, out of a total population of around 6.2 million. Children are the most affected group who make up half of the directly affected victims of the conflict.  Around 700,000 of these children (the under-five population) have grown up in the conflict.

Currently, around 3600 people continue to day every day due to malnutrition and contagious illnesses. Further, despite the ceasefire violent clashes claimed 600 lives in Darfur and due to forthcoming elections more escalation of the violence is expected.

Restrictions imposed by the government and attacks on the aid workers seriously interrupt the work of the aid agencies. They cannot operate freely thus some parts of the needy people fail to receive appropriate aid.  On 4th of March, 2009 around 13 foreign aid agencies and three local organisations that would provide  more than half the aid in Darfur were dispelled form the region, in retaliation to decision of the International Criminal Court’ on issuing an arrest warrant for, Omar al-Bashir. Around 650,000 people were denied to have access to full healthcare as many clinics have been closed or staffed inadequately.

A damming report published by Amnesty International (2004) revealed that rape and other forms of sexual violence that have been used as weapon to ‘humiliate, punish, control, inflict fear and displace women and their communities.’ In the thorough investigation Amnesty concluded that rape of Darfurian women and girl and other forms of sexual attacks by the pro-government Arab Janjawid militia   ‘constitute grave violations of international human rights and humanitarian law, including war crimes and crimes against humanity’.

There is a debate regarding the nature of the mass killings of indigenous Africans and other despicable crimes committed against humanity. The US and some other international NGOs have concluded without a doubt that what happened in Darfur was genocide.

In March 2004 Mr Mukesh Kapila, the then UN Resident Representative  was able to witness the extent of the atrocities appealed to the conscience of the international community:  ‘This is ethnic cleansing, this is the world’s greatest humanitarian crisis, and I don’t know why the world isn’t doing more about it.’

However, in 2005 a UN investigation team consist of five members pointed out that indeed ‘war crimes’ were committed during the period of 2003-2005; ‘killing of civilians, enforced disappearances, destruction of villages, rape and other forms of sexual violence, pillaging and forced displacement, throughout Darfur’.

But they concluded, there was not a genocide perpetrated by the Sudan government.  However, in a watered down statement the report also included that there might be individual attempts to commit acts with ‘genocidal intend’. The report also blamed the Rebel groups for some of the atrocities.

In 2009 the ICC in Hague issued an arrest warrant for Sudanese officials including the president Omar al-Bashir for war crimes and crimes against humanity. Initials attempts of the prosecutors were failed to include genocide in the charges. An appeal made later on to the court and s pre-trial chamber is now considering to press genocide charges.   This however has also played into the hands of Bashir and his supporters, given the ICC’s preoccupation with Africa and its failure to tackle e.g. the Israeli authorities, thus undermining its credibility.

Why so little response?

Unfortunately, various political factors have caused the Darfur conflict to be viewed in suspicious terms, with victims cast in the light of at best political pawns in the hands of imperialists and Zionist and at worst collaborators with oppressive governments and interests.
Notable among these factors resulted in the Muslim world remaining silent.  The effective propaganda machinery of Sudan silenced possible the criticism of the Muslim public and NGOs. Perfunctory reactions of the Western governments and NGOs, as well as the ICC played at the hands of Sudanese officials who wanted the Muslim world to perceive the entire matter as another Western interference to domestic affairs of an ‘Islamic Country’.  The portrayal of the conflict as a primarily racist one, despite its complexities also exasperated NGOs within the Muslim world working on the issue before it became chic in Western circles.  Whilst the factor of ethnicity has become a part of the conflict, the genesis of the conflict was more complex and involved the systematic persecution of so-called Islamists who formed a large part of Darfur’s political movements, as well as the already outlined issue of gross underdevelopment.  IHRC’s own early warning work on Darfur from 1999 – 2003 was often greeted with derision and dismissal from media and political circles, as simply an attempt to promote Islamic fundamentalism in the region.

IHRC was one of the rare organizations who had a clear insight regarding the gravity of the situation. In its stern opposition to dreadful situation of Darfurians; IHRC considered the ongoing mass killing as a ‘genocide’ and embarked upon various campaigns to stop the violence and bring the perpetrators of the genocide before justice. In an unprecedented attempt, IHRC led an important campaign to wake up the Muslim world. In March 2008, IHRC mobilized more than 20 Muslim NGOs from countries as diverse as Britain, Pakistan, Germany, Malaysia, Iran, Turkey, the US, Australia and Bahrain to urge Arab League to act on Darfur. A joint letter signed by the NGOs was delivered to Arab League Secretary General Amr Musa, during an Arab League Foreign Ministers meeting in Damascus.

The letter criticized the Muslims world’s phlegmatic position in the conflict: ‘The crisis has cost the lives of at least 200,000 Muslims yet has not captured the attention of the Muslim world in the way it should… ’ and urged Arab league to take an active role to cease the violence in Darfur and involve in the humanitarian operation:

‘The suffering in Darfur is on a scale few of us can imagine. It is the duty of all of us, from whatever background, wherever we are, to do what we can to alleviate it, and we urge the Arab League to show good leadership in this… It is now time to speak with one voice, to help the needy, protect the weak, stop the killings and build a new peace.’
Ignorance about the conflict persists in both Muslim and non-Muslim circles with Darfurians often misunderstood to be Christians suffering persecution at the hands of Muslims.  This has provoked a partisan and simplistic chauvinism in support of both sides.  As IHRC has argued, Muslims need to create their own space to deal with the necessary task of critique and conflict resolution.  Without such a space such scenarios as described above abound.

However, there are still more to be done to ease the sufferings of Muslims of Darfur and punish those have were not hesitant to have the blood of their own brothers and sisters at their hands.
Likewise, there is a discourse amongst the radical left in Africa that sees Darfur as a front in the cold-war between China and the USA.  As such they see the support of the USA as imperialistic and concerned with securing access to Darfur’s rich mineral and oil wealth.  Despite their otherwise impeccable credentials with regard to social justice movements, this factor has caused them to side with Khartoum to the extent that they doubt the Darfurian narrative of genocide in some cases.

Finally the opportunistic alliances made by some Darfurian leaders with key Zionist organisations – even opening offices in Tel Aviv, has led parts of the pro-Palestinian movement to view the Darfurian conflict with unease.

In all these cases, while there are many factors that can be levelled as legitimate criticism of Darfurian leadership and tactics, justice for the genocide committed against the Darfurian people must not be sacrificed to these issues.  In an increasingly globalised world, it is the duty of radical and progressive movements world-wide from Muslim and non-Muslim quarters to create the arenas for real justice to be pursued.