Imam says he was beaten, strangled in Saudi Arabia 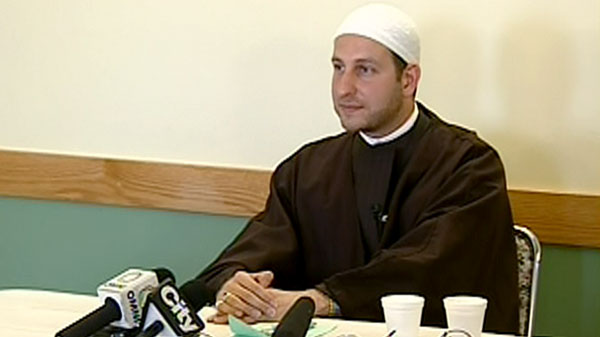 Usama Al-Atar, a well-known Shia spiritual leader who was held in what he had previously described as “horrid conditions,” spoke of his ordeal Sunday afternoon at the Islamic Shia Ithna-Asheri Association centre in Edmonton.

“I was strangled,” he told reporters. “They grabbed me really heavily by my arms, so my arms were wounded.”

Al-Atar was arrested Oct. 30 during a pilgrimage to Saudi Arabia called the Haj. His arrest followed a clash with Saudi religious police who noticed his group performing supplications at the Jannat al-Baqi, the graveyard near the Prophet’s Mosque in Medina.

In a statement released by the London-based Islamic Human Rights Commission (IHRC) after he was freed on Oct. 31, Al-Atar said: “I was falsely arrested and held by Saudi authorities for the best part of the previous 36 hours in what can only be described as horrid conditions. I feel deeply relieved and very grateful to be free and reunited with friends.”

Even though the University of Alberta researcher was bruised and bloodied after being shackled in a holding cell, he was reluctant to talk about his ordeal until he had completed his pilgrimage.

On Sunday, Al-Atar accused Canadian officials of taking too long to come to his aid. He says officials at the Canadian Embassy in Saudi Arabia told him they could not reach him more quickly because they had trouble securing transportation during the Haj.

Al-Atar is calling on the federal government to form an official Haj delegation, so other Canadian Muslims can have some protection from similar incidents.

“Had there been a Haj delegation, this delegation would have come to the police station and within minutes I would have been freed,” he said.

“Once the awareness was out there, people picked up their phones and started writing their MPs,” Mavani told CTV Edmonton. “If that had not reached the public, maybe the results would have been different.”

The cemetery where Al-Atar was arrested has long been a place of tension between Shia pilgrims and the religious police, who uphold a strict application of Wahhabist Islam at odds with other Muslim schools of thought.

“They (the religious police) are very touchy about people going there,” said IHRC chairman Massoud Shadjareh.

“They virtually strangled him. We saw him go black and blue,” Mohamed Hayward told The Canadian Press at the time of the arrest.

Al-Atar, one of three clerics accompanying 170 pilgrims on a tour organized by a British agency, has denounced human-rights violations in Saudi Arabia and in neighbouring Bahrain in the past.