In US, Egypt leader puts onus on Israel

Home
Uncategorized
In US, Egypt leader puts onus on Israel 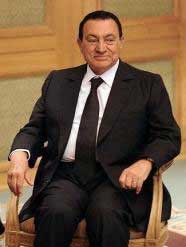 WASHINGTON — Egyptian President Hosni Mubarak on Monday put the onus on Israel to break a deadlock with Arab nations as he held talks with a US administration under pressure to launch a new peace push.

Mubarak met for more than an hour Secretary of State Hillary Clinton a day ahead of a summit with President Barack Obama.

It will be the first White House meeting in five years for Mubarak, who had tense relations with former president George W. Bush.

Obama has shown new deference to the octogenarian Egyptian leader, with his administration saying it wanted to consult with him before launching any major new initiative in the Middle East.

But US hopes to push forward the peace plan before the Muslim holy month of Ramadan starts later this week look increasingly slim as Israel and Arab states both insist that the other make the first move.

In remarks published Monday, Mubarak said he told Obama in June — when the US leader chose Cairo as the backdrop for a landmark speech reaching out to the Islamic world — that Israel must freeze settlements.

“I explained to President Obama in Cairo that the Arab initiative offers the recognition of Israel and normalization of ties with it after, and not before, a just and lasting peace is achieved,” Mubarak told the state-controlled Al-Ahram newspaper.

The position is in line with other Arab states including Saudi Arabia, which has rejected any “step by step” diplomatic approach with Israel.

The Arab League in 2002 endorsed a Saudi-led plan calling for Arab states to recognize Israel in exchange for Israel’s withdrawal from the land it occupied in war in 1967 and an equitable resolution for Palestinian refugees.

Only two Arab countries, Egypt and Jordan, have signed peace treaties with the Jewish state while some other Arab countries have trade relations.

“Some Arab countries that exchanged representatives and trade offices might think of reopening these offices if Israel committed itself to stop settlement expansion and to resume final status peace negotiations,” Mubarak said.

State Department spokesman Philip Crowley voiced confidence that Egypt agreed with the United States on the need for “gestures that move towards normalization” as both Israel and the Palestinians take peace steps.

“It is something that we raise in every high-level meeting that we have,” Crowley told reporters. “We would like to see Egypt embark on a path to expand political dialogue.”

Mubarak had tense relations with Bush, who pushed Egypt to release dissidents and hold free elections.

Leading Egyptian dissident Ayman Nur, who was freed this year after three years in prison, earlier voiced fear that Obama would set back efforts to promote political reform in Egypt.
“It betrays American values,” Nur told AFP in Cairo.

The lawyer mounted an unprecedented challenge to Mubarak in the 2005 presidential election before being jailed on forgery charges many saw as trumped up.

Mubarak also met Monday with some 20 Jewish leaders on the peace process and also on Iran, which both Israel and Egypt fear is developing nuclear weapons, participants said.

Martin Raffel, senior vice president of the Jewish Council for Public Affairs, described the meeting as “very friendly” and said he believed Mubarak “clearly is committed” to moving ahead with the peace process.

But he said the Jewish leaders also pressed Mubarak to find ways to reassure the Israeli public “that the Arab world is serious about trying to achieve peace with Israel.”

“If you’re asking Israel to make hard decisions,” Raffel told AFP, “the Israeli people have to begin to feel that there is a positive change happening with the broader Arab world beyond Egypt and Jordan.”