Is Islamophobia a form of racism?

Home
Briefings
Is Islamophobia a form of racism? 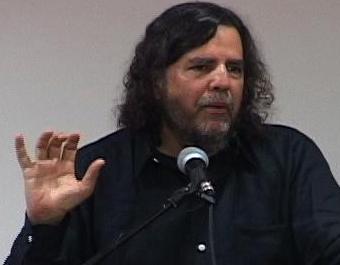 Professor Ramon Grosfoguel, one of the leading de-colonial thinkers and academics of the contemporary world, is an associate professor in the Ethics Study Department of the University of California, Berkley. He has been instrumental in setting up de-colonial projects around the world.

In his lecture given on 12 December 2012 at the Islamic Human Rights Commission, Professor Grosfoguel discusses the historical development of racism and issues related to the concept of Islamophobia.

The rise of Islamic discourse and Islamophobia in Europe has become very prominent over the last ten years. This lecture is particularly relevant as Islamophobia is not widely accepted as a form of racism. For example, the French government opposes and actively blocks Islamophobia as racism on the grounds that racism is colour discrimination.

Grosfoguel provides a concise history of the emergence of racism in order to more clearly define the notion of racism, historically not semantically.

‘I am highly critical of these trans-historical universal abstract statements that make sweeping arguments about everything as a way to diminish the responsibility of the West.’

Grosfoguel discusses the Western manipulation of historiography today, claiming that the ‘animalization of human beings is a modern phenomenon.’ He argues that in Eurocentric historiography there is a tendency to flatten down a homogenised history as a way of ideologically reducing the responsibility of the west in the formation of modern racial slavery and racism.

In Europe it is common to extrapolate into the past the institutionalization of slavery and racism, conveniently underplaying the atrocities of historical European actions. By blaming others, the pretence of innocent white history can be upheld.

This is particularly evident when considering Palestine. The Islamophobia and Eurocentric historiography instilled through Orientalism and Zionism presents the conflict in the Middle East as being between Jews and Muslims. This recently constructed mentality of inherent conflict between Muslims and Jews is a psychological manipulation that legitimises the lack of Western responsibility concerning these issues, making it a trans-historical and universal issue. Grosfoguel states that in reality the tensions between Palestine and Israel are a colonial racial problem, evidenced in the role of British interference through the Balfour Declaration.

The History of Al-Andalus: The Beginning of Racism

To identify the emergence of racism in the world Grosfoguel initially focuses on the conquest of Al-Andalus in the fifteenth century. Historicising the relationship between conquerors of Al- Andalus and conquerors of the Americas allows him to draw parallels and examine the interrelations between the two. When the Catholic Monarchy came to conquer Andalucía, not only did they take over the land and destroy the Islamic political authority, they imposed a new and entirely foreign concept; ‘one identity, one religion, one state.’ This immediately created a power dynamic, with the European ideology as superior.

The previous Islamic political authority encouraged a multiplicity of identities and respect for multiple spiritualities. Jews and Catholics in Islamic territories had rights and representation in political authorities. However, the Catholic Monarchy imposed a different logic through their colonisation. Grosfoguel describes the Catholic Monarchy’s proto-racist notion of purity of blood. This settler colonialism mentality was based upon the genealogy of ancestry whereby anyone with Jewish or Muslim parents did not have pure blood unless evangelised. However, Grosfoguel makes clear this was not yet a fully racist ideology.

By revisiting Spanish history, Grosfoguel identifies the development from proto-racism to racism. On October 12th 1492, with the permission of the recently unified Spanish Monarchy, Christopher Columbus arrived in Guanahani (The Bahamas). Upon meeting the indigenous people, he believed they were without religion. Christian imagination of this time upheld that without belief in God, one did not have a soul. Therefore, the indigenous people were believed to be an animal species. Grosfoguel is careful to highlight that this racism was not about the colour of their skin. The whole population was classified as subhuman, not because of their race, but because they have no soul. This ideology led to the legitimisation of slavery as it was not considered a sin in the eyes of God to enslave soulless creatures.

This opened a vast debate in Europe between 1492 and 1552. Despite the Popes decree in 1537 stating, ‘these people have a soul, but it is an animal soul,’ the ambiguity surrounding the souls of these people remained. In 1552 there was a major colonial racial debate in the school of Salamanca between Bartolome de Las Cases and Juan Gines de Sepulveda.

Bartolome de Las Cases argued that although they have a soul, they are like children. Therefore they are barbarians that need to be Christianized. This constitutes cultural racism. On the other hand, Juan Gines de Sepulveda argued these people have no souls because they have no notion of private property or trade and commerce, thus they must be animals. This constitutes biological racism.

Biological and cultural racism, as separate entities and as entangled discourses, became prominent ideologies of Western Imperialism for the next several hundred years throughout the Empires. The nineteenth century saw the secularization of these narratives when the authority of knowledge passed from Christian theology to the scientific system, but they did not die out.

The colonial and evangelical methods used in Andalucía acquired new meaning in the Americas, as the notion of purity of blood became associated with the soul. This notion redefined the medieval religious discrimination discourses, turning them into racial discourses.  The fundamental question came to be about human constitution.

Therefore, it was no longer proto-racism concerning conversion in religious terms, but the paradigm shifted to humanity and dehumanisation. Humanity becomes a fundamental defining question of what we call racism.

Grosfoguel goes on to examine the importance of the theory and scope of knowledge in relation to the development of racism. He focuses on what he describes as the seventeenth century ‘epistemic revolution.’

The emergence of Rene Descarte’s metaphysical theory ‘I  think therefore I exist’ inaugurates a new form of Universalism in the West by a God-like claim to be the most epistemically advanced perspective. No other religious or philosophical doctrine makes these idolatrous Universalist claims.

So who is the ‘I’ Descartes is referring to? Grosfoguel opines that there has to be an element of ambiguity within western epistemology in order to appear infallible, universal and objective, thus painting all other structures of knowledge as particular and therefore inferior. Modern Eurocentric sciences are founded on these epistemological assumptions.

Enrique Dussel, a philosopher of liberation in Latin America, questions which geopolitical location, and which body this ‘I’ is speaking from. Grosfoguel interprets Descartes claim as arising from a mentality of 150 years of ‘I conquer therefore I exist.’ This omnipotent claim to knowledge is made possible as the Western system conquered the world and, in terms of epistemic privilege, put Western Imperial man at the centre. Thus, behind ‘I think therefore I exist’ lies ‘I exterminate therefore I exist.’

The evidence for this claim of extermination lies in five forms of genocides:

5.       Genocide of millions of women in 16thc accused of being witches within the Western European world.

By placing himself in an epistemic privileged position, claiming to have a knowledge superior to the knowledge of everybody else, Western man created Idolatric Universalism. This is evident through the centuries; from the 16th century obligation to Christianise through to the 21st century obligation to conform to the Western supremacy of democracy, or face persecution. This is the rhetoric of modernity and genocide, internally rooted in Western epistemology. Any other realm of knowledge is diminished as particularistic.

‘Racism is an institutional power structure of superiority/inferiority along the line of the human.’

In the Fanonial sense, boundaries based on colour is only one form of racism. There are two categories that define ones humanity, the zone of being and the zone of non-being. Inside the zone of being, despite inevitable conflict, one is racially privileged. Conflict is managed through access to law, human rights and women’s rights, emancapatory discourses of equality, recognition of rights, autonomy and freedom, with exceptional moments of violence.

In the zone of non-being humanity is not recognized. Conflict management is recognized through perpetual violence, appropriation and oppression. The racism that brands people in the zone of non-being can be colour, ethnicity, religion and national identity. Grosfoguel argues that 80% of humanity falls into this categorisation. This is the fundamental structure of racism: not having access to course of law or emancipatory discourse because humanity is not recognized.

Grosfoguel concludes that Islamophobia is a form of racism in Europe. By constructing a hierarchy of superiority and inferiority along the line of the human, Muslims are dehumanised as savages and violent beings. This racism encompasses religion, culture, race and white supremacy of knowledge. We are reproducing the same structure evident in fifteenth century Adalucia of “divide and rule”. Grosfoguel astutely observes the historiography of Western self-appointed epistemic privilege to prove that the West continues to dictate who is in the zone of being, and who is not.