Israel is a ‘threat’ says Turkey 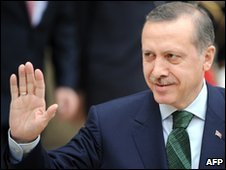 Recep Tayyip Erdogan was speaking during a visit to Paris.

Relations between the two countries have been worsening since the Israeli incursion into the Gaza Strip in 2009, made worse by a recent diplomatic row.

Mr Erdogan was speaking to journalists before meeting the French President Nicolas Sarkozy.

“It is Israel that is the main threat to regional peace,” he said.
“If a country uses disproportionate force, in Palestine, in Gaza, uses phosphorus bombs we are not going to say ‘well done.'”

Both Israel and Hamas, which control the Gaza Strip, have been accused by the UN of war crimes during the 22-day offensive in December 2008 and January 2009.

“We are interested in good relations with Turkey and regret that Mr Erdogan chooses time after time to attack Israel,” he told reporters in Israel.

The countries have been allies in the past.

But earlier this week, the Turkish ambassador to Israel was recalled by Ankara, weeks after being humiliated in public by the Israeli deputy foreign minister.

Ambassador Oguz Celikkol was called into the Israeli foreign ministry in January and rebuked over a Turkish television series that showed Israeli intelligence agents kidnapping children.

Mr Celikkol was made to sit on a low chair while being lectured by Deputy Foreign Minister Danny Ayalon.