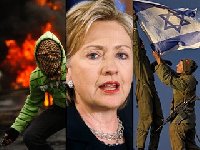 In diplomatic circles, in Europe as well as the Arab states, there has been discussion of the possibility of Iran’s being designated a “civil nuclear power,” exercising its right, under the Nonproliferation Treaty (which it has signed), to develop power for civilian uses.

This is what Iran has persistently claimed to be all it wants. The proposal goes on to say that whatever military work Iran has done is already faits accomplis — “created facts,” that are useless to contest.

The proposal is that if the U.S. were to join Europe and the Sunni Arabs in a drive to push Israel — which has plenty of concealed nuclear “facts” — to join the non-proliferation pact, which it has always refused to do, and open up to inspectors, just as Iran has done, the Iran-Israel discussion could at least be switched onto a new track.

The foreign policy position of Israel under the Benjamin Netanyahu government remains officially unknown. It undoubtedly will not be clarified until the new Israeli prime minister visits the United States to meet President Barack Obama.

The atmosphere is chilly, the unction of Shimon Peres during his American visit notwithstanding, because of the less-than-enthusiastic welcome the Obama administration gave the America-Israel Public Affairs Committee convention last week. Vice President Joe Biden attended, and Rahm Emanuel was the star of a fund-raising reception. But both stuck to the U.S. position that there must be a two-state solution to the Israel-Palestine conflict.

Secretary of State Hillary Clinton was not there, and has been rumored to be fighting on Israel’s side in a conflict with National Security Adviser Gen. James L. Jones, whose insistence on the two-state agreement is seen by the Israelis as a threat. They want to throw out all previous agreements with the Palestinians, the Quartet and the United States and start negotiations all over.

Israel has set two conditions for new talks, both conflicting with U.S. policy. The first is Iran’s effective nuclear disarmament, which is impossible because of those Iranian facts on the ground, and because the U.S. has set itself against military action.

The second demand is also made for propaganda purposes, and is of transparent bad faith. It is that Israel be “recognized as a Jewish state” by all its interlocutors. This is impossible because Israel refuses to describe which “Israel” is to be recognized. The 1948 state recognized by the U.N.? Israel within the 1967 armistice borders (long ago violated by colonies and annexation of Palestinian lands)? Or an Israel with frontiers yet to be defined — since annexation and colonization continue today?

This comes at a moment when Israel’s Jewish population actually is falling through emigration. Israel already is internationally recognized within its legal borders. Everyone knows that it is a Jewish state.

But the demand to recognize it as such is meant to exclude the Arab citizens of Israel, who were there long before there was an Israel. Netanyahu’s new foreign minister, Avigdor Lieberman, has already demanded that they be forced to take a loyalty oath (or be expelled).

The demand is also meant to foreclose Palestinian claims on illegally seized property in 1948 or after, and most important, to close off any Palestinian “right to return” (or recompense).

This position is not meant to be taken seriously. It is propaganda to impress foreign public opinion and Jews living in Europe and America: “You see, the Arabs won’t even recognize us as a Jewish state!”

The demand that the threat of Iran be eliminated before Israel negotiates on Palestine replays a well-worn record. The issue could still be considered live a year ago, when Israel sought American permission (and assistance) in an attack on Iran. That was rejected by President George W. Bush, probably to greater surprise in Jerusalem than in Washington, where the political class has no desire for still another war sure to involve the United States.

President Netanyahu will probably tell President Obama that he will be happy to negotiate but only on conditions that cannot be met, including total suppression of Hamas, denial of a sovereign Palestine state in full control of its territory, and without removing established Israeli colonies or Israeli air and water rights.

Since none of this can be taken seriously, the great question is what response Barack Obama will give. That will reveal to the world whether there will or will not be more war in the Middle East.