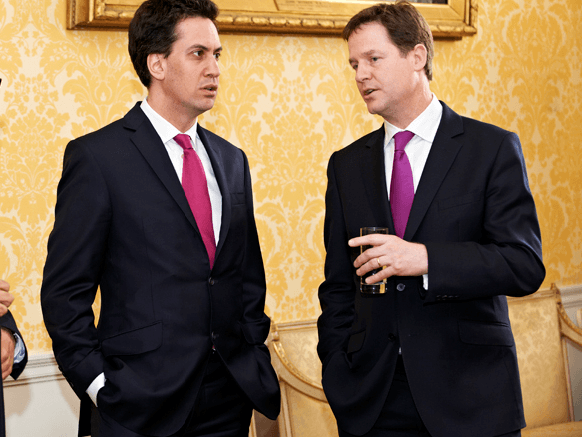 Commiserations. I didn’t vote Labour (not that it made a difference), as my incumbent Labour MP aside from all sorts of anti-Palestinian, anti-Chechen, anti-Kashmiri and pro-Israeli advocacy over his career, is also a rabid cheerleader of the mass murderer Narendra Modi. Nevertheless I was hoping that a Labour – SNP coalition was a reality that could, just maybe, start to reverse the xenophobic trend that Faisal Bodi, amongst others so ably identified as gripping British political culture.

Just like yourself and even the pollsters, I had not understood how far the racist hysteria had trickled down, and how fear of the migrant, the Muslim and above all the Scots, would determine the outcome. The signs were there, so why did we all miss them? The sneering, thinly veiled anti-Semitism levelled at you – the Bacon sandwich ‘gaffe’, the ‘father who hated Britain’ tags that followed you around, should have been called out for what they were, but passed instead unchallenged. You were a victim of the racism, that we have long argued is on the way back into public consciousness as a result of unchecked Islamophobia. The anti-Semitic tropes of disloyalty and untrustworthiness long since displaced to other out groups, most recently Muslims, found expression again in the attacks on your father and by dint, you.

It seemed throughout this campaign that you had compromised your principles in an attempt to walk through the door of Number 10. Most notably your promises to tackle immigration were an unforgivable sop to the vulnerable working class voter, tempted by UKIP. A commitment to austerity too, really didn’t sound like the programme of Ed Miliband, but a caricature of a once principled man. Let’s not even talk about Israel. Despite being the antithesis of Blair, ultimately it felt like the same sort of abdication of moral leadership that Blair embodies.

I am depressed at the result, but also in a way happy for you. We all needed to resign ourselves to the fact that the Tories didn’t win today, but that Toryism has in fact been running this country in various guises since 1979. It is so warped now it is even making a mockery of itself, as it converges with the neoconservative agenda that has been steadily destroying the world these last few decades.

To be in power – as Blair so ably demonstrated – is to bend yourself to that agenda, unquestioningly. You are now free of this. I wish you well, you may actually be better placed to do some real work towards transforming this society from outside the Westminster bubble. You did more than any other party leader on Palestine, and despite all the recent posturing, many of us think deep down you are an internationalist who has shown he opposes the culture of war that prevails. If that is what you can do within the constraints of the upper echelons of the political class, I pray that you can do more now you have left it.

We met years ago at an event organised by that bastion of radicalisation, the Joseph Rowntree Charitable Trust. This was maybe 8 or 9 years ago, and you were a new intake MP. I was presenting about inter alia, attacks on and discrimination against Muslims. You asked whether there were any statistics? You seemed to be one of the few who actually accepted that such things exist and care that they do. I got someone from the office to email you the stats we had produced over the previous two years. We didn’t hear back.

It was hard then, to see you become so willingly complicit in a government that outstripped its New Labour predecessor in closing down the space to talk about all forms of inequality, and criminalising difference, particularly, but not solely Muslim difference. This same government has pushed a supremacist agenda of ‘fundamental British values’, attacked Muslim practices, and particularly in terms of education, Muslim aspiration. All of these are part of the structural problem that our work has highlighted needs tackling.

Since that conversation at JRCT, IHRC has produced comprehensive, academically rigorous statistics on hatred and discrimination against Muslims in the UK (and elsewhere). We are about to publish our second set of stats (collected by survey in 2014). The first were collected in 2009-10. I will let you into a secret ahead of publication – everything is worse. There are more reports of violent attacks, more discrimination at work and at school, more negative imagery in the media, more anti-Muslim policies and political discourse than last time round.

The government you were part of has been instrumental in this rise. It stoked fear of ‘others’ amongst the population at large who in turn voted for the people who claimed they would decisively deal with the threat of ‘otherness’.

The treatment of minorities, of women, the weak and the vulnerable are the real measure of any society. I think that might be something you understand, and I hope that is what you were talking about when you spoke about the ‘liberal values’ that Britain needs in your resignation speech. Let’s not fight about the term ‘liberal’ now, but let’s agree on the fact that government praxis is racist, and your contribution as Deputy PM, simply reinforced that. If you need to know how, listen to Ramon Grosfoguel explain how we still live colonial hierarchies, the organising principle of which is race.

Like Ed, you are now able to do something transformative. Please do it.

Congratulations and thank you!

Nothing is perfect, but the movement embodied by the SNP has given hope that there can be mainstream movement that tries to be inclusive in a normative not superficial sense. Thank you Alex, for all the times you have made clear that Muslims are as integral a part of Scottish citizenry as everyone else, and that any attacks on them will be dealt with by the law.

You have identified that the problems faced by the poor and marginalised are linked to the same structural issues that reproduce racism, of which Islamophobia is one expression. The outcome of how we have been governed are hierarchies of oppression. Wherever we are placed within these hierarchies, all bar the elite who hold the real power, are oppressed. Thank you for understanding.

I sign off in hope, despite what has just happened.