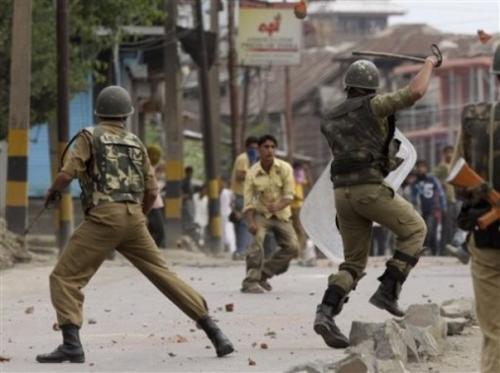 Ten such victims have died within the last twenty four hours for pelting stones and violating curfew. The central cabinet’s security committee met last night without the attendance of even the governor, the de facto ruler, of the state. Today the dummy chief minister of the state was called for a meeting in Delhi and assured that direct central rule will not be imposed on the state.

The situation in the Valley has not deteriorated within a day or two and forces across the border alone are not responsible for the chaos seen in the length and breadth of the Valley. Today’s chaos in the Valley basically reflects the failure of the central government which despite declarations and promises to the contrary, has utterly failed to negotiate with the people who matter in Kashmir, which has thrown in the dustbin the autonomy and self-rule proposals presented by its own trusted hands in the state. Musharraf and even the current Pakistani government have been time and again offering proposals to arrive at a settlement of sorts taking into account the ground realities but visionless people in Delhi have squandered the opportunity. The army bullets once again prove what our enemies claim that India is interested only in the land of Kashmir and not in its people. Manmohan is fast becoming Jagmohan for Kashmir.

The way forward is to sack the childish government of Omar Abdullah, set free all activists and political leaders arrested during the last few weeks, withdraw the army and allied forces from all inhabited areas in the Valley, impose governor raj for a fixed and declared period of six months, accept the autonomy proposal presented by the J&K Assembly during Farooq Abdullah’s tenure in 2000, announce a general amnesty for all militants and welcome those who crossed over into POK, hold a fair election with none barred from contesting and monitored by foreign observers like Jimmy Carter and representatives from the UN, EU, OIC etc and let the real winner rule the state. Meanwhile, India must engage in a serious and purposeful dialogue with Pakistan taking into account the various proposals offered by Musharraf and the current government in Islamabad.

Failure to work on these lines will be fatal. The protests in the Valley are quickly taking the shape of an intifadah which no amount of army bullets will be able to control. Rather, these criminal bullets and their innocent victims will invite foreign intervention. Let the short-sighted strategists in Delhi realise that foreign intervention is no longer a myth. A prolonged protest, wanton wholesale murder of the civilians and children by the security forces and collapse of the dummy civilian government will be enough to pass a resolution in the UN to authorise foreign military intervention and the small men in Delhi will not be able to prevent such forces from landing in Srinagar. The Valley today is a Kosovo-in-waiting. Act now before it is too late.