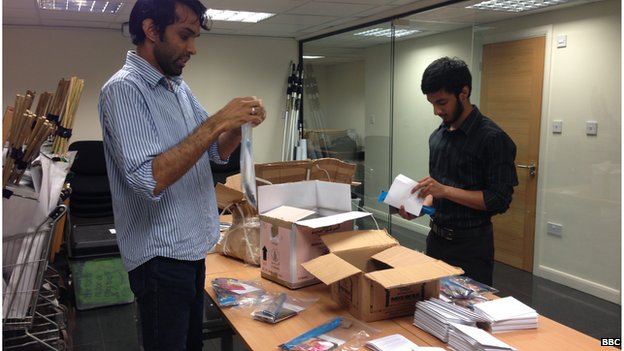 As Muslims around the world celebrate the end of the holy month of Ramadan, a London-based charity is providing Eid packs to more than 400 prisoners so they can mark the occasion.

“First of all, prison isn’t easy as everyone makes it out to be. You make it what it is,” says Naj Dar, a Muslim who spent nearly 10 years in jail.

“A little bit of a present from outside gives you a bit of reality, a bit of hope.

“Once you’re behind the door you think everyone’s forgotten about you. Your friends, everyone forgets about you until you get out,” added the 46-year-old.

In the basement of the Islamic Human Rights Commission’s (IHRC) bookshop in north Wembley, volunteers are preparing Eid packs to distribute to Muslim prisoners in London.

Abid Choudhry, who works for the commission, came up with the idea last year.

The packs cost about £2 each and have been funded through donations to the charity.

The IHRC Eid packs contain a packet of halal sweets, an organic tooth chew, a pocket-sized prayer book and an Eid card prisoners can send on to their loved ones. All items are on the Prison Service’s allowed-list for inmates.

Mr Choudhry says they make it clear that the packs are for Muslims in prison but people are still happy to help.

“Generally it’s quite warmly welcomed within the community,” he said.

Suleman Nagdi, of the Federation of Muslim Organisations, has worked with offenders and says things like Eid packs are appreciated.

“I think it will mean a lot to an inmate, certainly because they will feel like they’re not detached from the community,” he said.

“Sometimes the gesture, no matter how small, goes an extremely long way, certainly in relation to their mental well-being within a prison environment.”

Mr Choudhry thinks Muslims across the UK should try and do the same in their area so that all Muslim prisoners receive something during Eid.

“We would like to do it across the country but practicalities won’t allow us so we’d like everybody to join in and do it in their local areas,” he said.

“It’s actually not that complicated. You contact your local prison chaplaincy and you tell them that you would like to provide Eid packs.”

A Prison Service spokesman said: “The Prison Service is committed to ensuring that the religious needs of all faiths are met and over the last few years a number of charities have started to give Eid packs to Muslim prisoners.

“Eid is a time for Muslims to spend with their families and these packs help to establish links for the prisoners in their local faith communities and can assist in their future resettlement.”