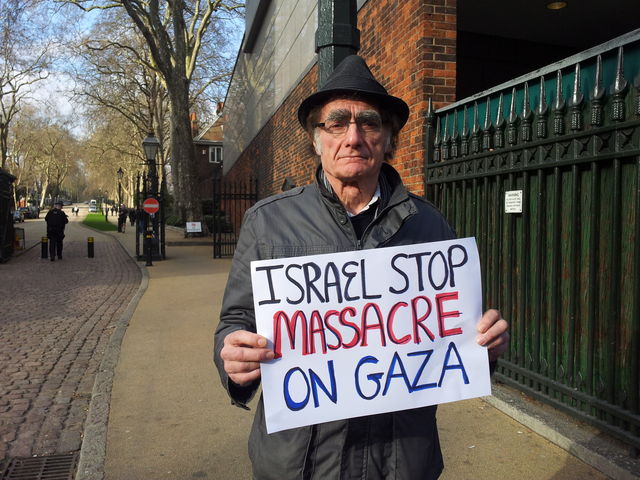 Waking up to the news on Saturday 10th March 2012, that 15 Gazans have been murdered by Israel under their latest areal and land offensive upon Gaza was deeply striking. The inherent lack of substantive reporting by U.K’s main news channels of the adversity faced by Gazans was notably usual. Whilst those in Gaza via social network sites and Palestinian new channels strived to keep the world informed of events as they occurred. An emergency vigil was organised outside London’s Israeli embassy primarily to ensure that Israel’s latest crimes are not whitewashed by silence manufactured by Israel and our Government.

The UK government is complicit in Israel’s illegal actions, due to its support of Israel, its failure to take reasonable steps to oppose Israel’s gross violations of International law & by the protection it affords Israel. Our Government was a staunch supporter of Apartheid South Africa and one of the last countries globally to withdraw its support for the apartheid South African regime. In a similar manner, the UK now funds & is complicit in Israeli apartheid.

The UK government controls our media & uses this to further its own objectives. As a result, the news of regular Israeli massacres upon Palestinians is not a clarion of truth or a voice often produced.

Israel works to silence dissent which our Government supports by directing its police force, a force the people pay for, to police the people, to further the Governments own objectives.

People took to the streets of London to let others know what is happening in GAZA now, to say this is NOT in our name & ask all to stand against this injustice. A video of this vigil can be viewed here:

A positive response was received from the public who stood by to listen and stand in solidarity often expressing their agreement and hopelessness as what they could do to help change the situation for Palestinians who are being systematically murdered & ethnically cleansed from their homeland until it seems that both they and their land no longer exist.

As a result of the failure of World leaders to stop Israel’s violations against International Law & crimes, in 2005, The Palestinian civil society called for a global people’s response, they are asking us to boycott, divest from & sanction Israel until:

1. Israel ends its occupation & colonisation of occupied Arab lands & the apartheid wall is dismantled; &
2. Israel recognises the rights of Arab Palestinians citizens of Israel, to full equality; &
3. Israel allows Palestinian refugees to return to their homeland.

At a similar event recently, I thanked a police officer and as I left and I told him he was different, he had a gentle and caring nature to him. The officer told me he has one of the ‘boycott Israel’ cards in his pocket and he will no longer be buying any of the products listed on it.

Assalamu alaikum, peace be upon you.