Loyal is as Loyal Does

Home
Uncategorized
Loyal is as Loyal Does 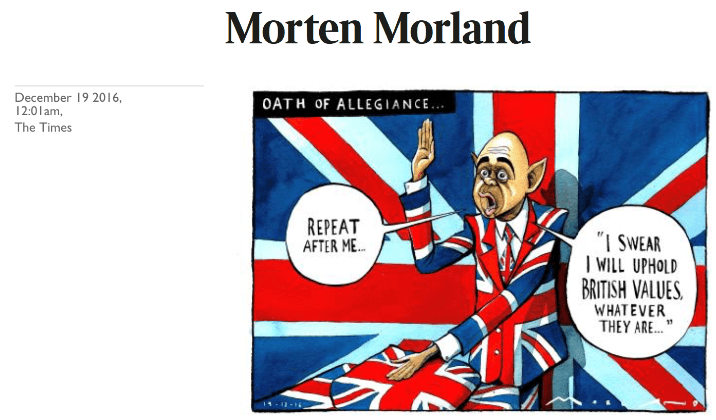 It should say something when the Trojan Hoax incubating, right wing media led by The Times finds Sajad Javid’s idea that public servants (in addition to migrants) should swear and oath of allegiance to the Queen and British values, a bit, well, ik. Today’s cartoon in The Times presents Javid as more British than British (not in a complimentary way). He stands in front of, draped and dressed in and swearing an oath on a Union flag.

This, mind, a day after The Sunday Times printed Javid’s opinion piece, now reduced to this quote, the importance of which I will return to later:

This all comes in the wake of Louise Casey’s ‘Integration’ review which has been dealt with elsewhere where she suggest an oath of loyalty should be sworn by people applying for UK citizenship. Javid goes further stating that public officials must lead by example and also swear the oath, but then wait, all migrants must do so too (even those that don’t want to become British).

Whilst Javid offers a list of what (some) of those ‘values’ might be, like Casey, making an empirical or even philosophical link between the swearing of such an oath and the assuaging of whatever problems he and Casey imagine lie at the heart of failed integrative efforts on the part of those marginalized (Javid has the grace to admit that they are ‘excluded’) is unlcear. The SNP have claimed that this whole conversation is a distraction from the unending disaster that is Brexit and are mooted to be considering opposing it. Surprisingly, though, it feels like Javid really believes what he is saying, thus the desire for the oath to be made by those who lead to set an example. It tries to make some sense of Casey. It suggests fairness of a sort. Maybe if Javid had left it at migrants of the aspiring citizen and non-citizen type, the ik factor expressed by colleagues and comment pieces might have lessened, but Javid appears to have earnestly fallen for what so many generations of minorities have come to realize is the lie at the heart of the promise of Britishness: that everyone can be part of this.

Javid’s Sunday Times’ piece speaks of how his parents pushed him and his siblings to integrate. One sibling even went to a Catholic school, a reflection that must surely bring into question how much Javid has understood about life in England at least, given the visceral undercurrent of anti-Catholic hatred (even a former Prime Minister, Tony Blair, could not announce his conversion to Catholicism until he had left office). Javid laments and then celebrates his mother who broke the chains of not speaking English after more than a decade in the UK without those particular language skills. The rest is (his) (his)story. Perhaps his political rise has insulated him, but as Claudia Rankine in her poetic demolition of the myth of the post-racial state explains over and over again in ‘Citizen’ this is not even the experience of the super-successful:

“The man at the cash register wants to know if your card will work. If this is his routine he didn’t use it on the friend who went before you… The man behind the register returns your card and places the sandwich and Pellegrino in a bag, which you take from the counter. What is wrong with you? This question gets stuck in your dreams.”

And this is where the end of Javid’s much quoted paragraph above is important, and probably why it is missing from the rest of the reportage. In full the quote reads thus:

“I’m talking about tolerating the views of others, even if you disagree with them. About believing in freedom of speech, freedom of religion, freedom from abuse. I’m talking about a belief in equality, democracy and the democratic process. And about respect for the law, even if you think the law is an ass. Because if you do disagree, you can change it. That’s what freedom and democracy are all about.” [My emphasis]

As Rankine’s narrator tells, this is not the case. Nothing changes, English literate or not, voter or not. All the meanwhile our citizenship doesn’t exist, not even for those of us with the passport. If Javid had left it at Casey’s recommendation, or even his own suggestion that all migrants swear an oath he may well have been lauded in the same circles he is quietly being deprecated in that slow drip British way. He has failed, rather like his vision of his own integration, in that you just don’t ask those who rule to hold the same standard they wish to impose on others, and then demonise them for being deficient thereof. They don’t need to swear an oath, and Javid didn’t get to change anything.