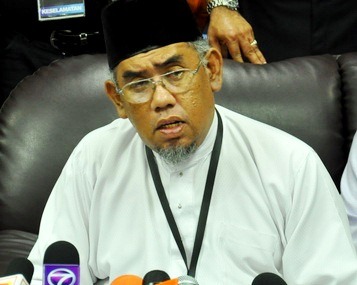 “As this issue is hotly debated, we feel it should be discussed wisely based on knowledge and wisdom to avoid any negative impact on Muslims in general.

“Having followed the continuous debate on the print and electronic media, we fear Muslims will fall into enmity of each other and ultimately destroy unity of the Muslims,” said Malaysian Consultative Council for Islamic Organization president Azmi Abdul Hamid (pic).

He was responding to several statements by Islamic bureaucrats and UMNO leaders who have labeled Shi’ite Muslims as being outside the fold of Islam and have issued statements based on oft-repeated historical myths surrounding the second major strand of Islam.

But Azmi said the Amman Message sponsored by Jordan’s King Abdullah II and endorsed by 552 Islamic scholars and leaders, has clearly recognised eight varying schools of thought in Islam while forbidding Muslims from pronouncing disbelief upon other Muslims.

The eight groups of Muslims include the four major Sunni schools, the two Shia schools of Ja’afari and Zaydi, as well as the Ibadi and Zahiri. The declaration also said no Muslims had the right to condemn those subscribing to the Ash’ari, Tasawwuf and Salafi creeds. (Click here for full text of the Amman Message).

Azmi alluded to Islam’s tradition of accepting differences (khilaf) within its corpus of sciences, saying there was no room for zealots and emotions in such discourses.

“Those who argue based on emotion and who do not possess knowledge in Islamic disciplines should concede to and refer to world-renowned ulama who are more qualified to speak on this issue,” he added.

MAPIM also echoed PAS president Tuan Guru Abdul Hadi Awang who had hit out at those he said were ignorant of true Islamic scholarly traditions in their rhetoric against Shia Islam, as shown by several media outlets, most prominently by UMNO-owned Utusan Malaysia and Sinar Harian.

“To counter a certain teaching considered deviant by Muslims, the correct way is throught intellectual discourse and wise counsel in keeping with Allah’s command, ‘Invite (all) to the Way of thy Lord with wisdom and beautiful preaching; and argue with them in ways that are best and most gracious’,” said Azmi, quoting verse 125 of Surah al-Nahl of the Qur’an.

He also warned of the western powers’ political agenda behind rising sectarianism in the Muslim world, including in Iraq, Pakistan and Syria.

“Malaysia should do well to avoid being trapped in the West’s agenda of sharpening sectarian differences,” he stressed.