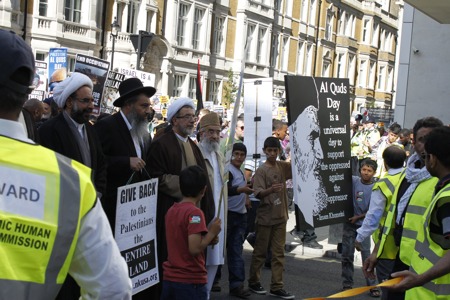 The annual Al Quds Day demonstrations in solidarity with the Palestinians are amongst the largest in the world. In the UK they have been organised by Islamic Human Rights Commission (IHRC) for the last 25 years. Al Quds Day is held on the last Friday of Ramadan, a month in which Muslims fast from dawn until dusk. Normally in Western countries where Friday is not considered a part of the weekend, it has been held on a Saturday to facilitate attendance. However, this year it was held on Friday afternoon in line with the rest of the world.

In the run up to the event, IHRC advertised Al Quds Day on London buses throughout the Olympic period, using Nelson Mandela’s famous and poignant quote, “Our freedom is incomplete without the freedom of the Palestinians”. This drew an incredible amount of attention and inevitably detractors from the Zionist lobby.   An unsuccessful campaign was launched to silence free speech by requesting the adverts be taken down. Over the two month campaign, these adverts were seen by millions of people all over central London during the busy Olympic period, which helped to create such an unprecedented turnout for a weekday Al Quds event in the UK. Over five thousand people attended to support the Palestinian cause, marching from the BBC Broadcasting House to the U.S. Embassy undeterred by the 30°C heat, even whilst most were fasting.

With support from over twenty organisations and speeches from a wide range of people, including Jeremy Corbyn MP, Rabbi Ahron Cohen, Reverend Stephen Sizer and Sheikh Bahmanpour as well as entertainment in the form of poetry from Sanasino and Ibrahim Sincere, the event was well-received by all.