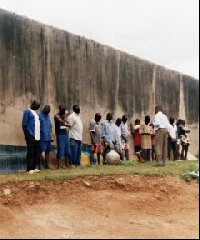 Hundreds of Nigerians in British jails could be sent home to finish their sentences under a multimillion pound deal now being negotiated by the government.

Talks are starting on a British investment to improve prison conditions in the west African country so as to allow the transfer of as many as possible of the 400 Nigerian prisoners here.

The UK Border Agency’s chief executive, Lin Homer, outlined the deal to MPs as she presented a six-monthly update on the progress made in deporting foreign national prisoners and in dealing with an asylum backlog of up to 450,000 outstanding case files.

In the past the Home Office has contributed towards the cost of building a prison in Jamaica to assist speeding up foreign prisoner transfers. But with Nigeria a change in the country’s constitution will be needed first to allow prisoner transfers without individuals’ consent.

Homer said: “We are in negotiations with Nigeria to help them establish better prison conditions … it is about helping them generate a structure that can cope. We are prepared to invest if that would enable us to send people home.”

The prisoner transfer agreement being discussed would also allow Britons held in Nigerian jails to return to the UK, the Ministry of Justice said.

The Home Office said the two governments were looking at equipping and upgrading existing jails, as well as training prison staff.

A spokesman said: “We believe prisoners should normally serve their sentences in their own country – freeing up prison spaces and saving the taxpayer money on enforced removals.

This also helps prepare prisoners for their release to the community into which they will return. In 2006 the government announced its intention to negotiate prisoner transfer agreements that did not require a prisoner’s consent as a prerequisite to transfer. The discussions with Nigeria are in line with this policy.”

Homer told the Commons home affairs select committee that the UK Border Agency was on track this year to deport 5,800 foreign criminals. She said 20% of the 984 former prisoners, identified this week as missing after breaching their licence terms, were foreign nationals.