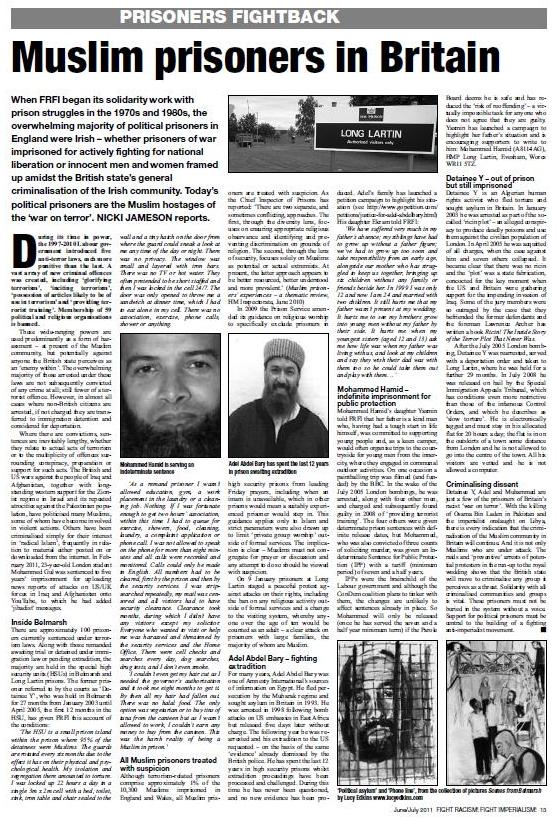 When FRFI began its solidarity work with prison struggles in the 1970s and 1980s, the overwhelming majority of political prisoners in England were Irish – whether prisoners of war imprisoned for actively fighting for national liberation or innocent men and women framed up amidst the British state’s general criminalisation of the Irish community. Today’s political prisoners are the Muslim hostages of the ‘war on terror’. NICKI JAMESON reports.

During its time in power, the 1997-2010 Labour government introduced five anti-terror laws, each more punitive than the last. A vast array of new criminal offences was created, including ‘glorifying terrorism’, ‘inciting terrorism’, ‘possession of articles likely to be of use in terrorism’ and ‘providing terrorist training’. Membership of 59 political and religious organisations is banned.

These wide-ranging powers are used predominantly as a form of harassment – at present of the Muslim community, but potentially against anyone the British state perceives as an ‘enemy within’. The overwhelming majority of those arrested under these laws are not subsequently convicted of any crime at all; still fewer of a terrorist offence. However, in almost all cases where non-British citizens are arrested, if not charged they are transferred to immigration detention and considered for deportation.

Where there are convictions, sentences are inevitably lengthy, whether they relate to actual acts of terrorism or to the multiplicity of offences surrounding conspiracy, preparation or support for such acts. The British and US wars against the people of Iraq and Afghanistan, together with long-standing western support for the Zionist regime in Israel and its repeated atrocities against the Palestinian population, have politicised many Muslims, some of whom have become involved in violent actions. Others have been criminalised simply for their interest in ‘radical Islam’, frequently in relation to material either posted on or downloaded from the internet. In February 2011, 23-year-old London student Mohammed Gul was sentenced to five years’ imprisonment for uploading news reports of attacks on US/UK forces in Iraq and Afghanistan onto YouTube, to which he had added ‘jihadist’ messages.

There are approximately 100 prisoners currently sentenced under terrorism laws. Along with those remanded awaiting trial or detained under immigration law or pending extradition, the majority are held in the special high security units (HSUs) in Belmarsh and Long Lartin prisons. The former prisoner referred to by the courts as ‘Detainee Y’, who was held in Belmarsh for 27 months from January 2003 until April 2005, the first 12 months in the HSU, has given FRFI this account of the conditions:

‘The HSU is a small prison island within the prison where 95% of the detainees were Muslims. The guards are rotated every six months due to the effect it has on their physical and psychological health. My isolation and segregation there amounted to torture. I was locked up 22 hours a day in a single 3m x 2m cell with a bed, toilet, sink, iron table and chair sealed to the wall and a tiny hatch on the door from where the guard could sneak a look at me any time of the day or night. There was no privacy. The window was small and layered with iron bars. There was no TV or hot water. They often pretended to be short staffed and then I was locked in the cell 24/7. The door was only opened to throw me a sandwich at dinner time, which I had to eat alone in my cell. There was no association, exercise, phone calls, shower or anything.

‘As a remand prisoner I wasn’t allowed education, gym, a work placement in the laundry or a cleaning job. Nothing. If I was fortunate enough to get two hours’ association, within this time I had to queue for exercise, showers, food, cleaning, laundry, a complaint application or phone call. I was not allowed to speak on the phone for more than eight minutes and all calls were recorded and monitored. Calls could only be made in English. All numbers had to be cleared, first by the prison and then by the security services. I was strip- searched repeatedly, my mail was censored and all visitors had to have security clearance. Clearance took months, during which I didn’t have any visitors except my solicitor. Everyone who wanted to visit or help me was harassed and threatened by the security services and the Home Office. There were cell checks and searches every day, dog searches, drug tests, and I don’t even smoke.

‘I couldn’t even get my hair cut as I needed the governor’s authorisation and it took me eight months to get it. By then all my hair had fallen out. There was no halal food. The only option was vegetarian or to buy tins of tuna from the canteen but as I wasn’t allowed to work, I couldn’t earn any money to buy from the canteen. This was the harsh reality of being a Muslim in prison.’

All Muslim prisoners treated with suspicion

Although terrorism-related prisoners comprise approximately 1% of the 10,300 Muslims imprisoned in England and Wales, all Muslim prisoners are treated with suspicion. As the Chief Inspector of Prisons has reported: ‘There are two separate, and sometimes conflicting, approaches. The first, through the diversity lens, focuses on ensuring appropriate religious observance and identifying and preventing discrimination on grounds of religion. The second, through the lens of security, focuses solely on Muslims as potential or actual extremists. At present, the latter approach appears to be better resourced, better understood and more prevalent.’ (Muslim prisoners’ experiences – a thematic review, HM Inspectorate, June 2010)

In 2009 the Prison Service amended its guidance on religious worship to specifically exclude prisoners in high security prisons from leading Friday prayers, including when an imam is unavailable, which in other prisons would mean a suitably experienced prisoner would step in. This guidance applies only to Islam and strict parameters were also drawn up to limit ‘private group worship’ outside of formal services. The implication is clear – Muslims must not congregate for prayer or discussion and any attempt to do so should be viewed with suspicion.

On 9 January prisoners at Long Lartin staged a peaceful protest against attacks on their rights, including the ban on any religious activity outside of formal services and a change to the visiting system, whereby anyone over the age of ten would be counted as an adult – a clear attack on prisoners with large families, the majority of whom are Muslim.

For many years, Adel Abdel Bary was one of Amnesty International’s sources of information on Egypt. He fled persecution by the Mubarak regime and sought asylum in Britain in 1993. He was arrested in 1998 following bomb attacks on US embassies in East Africa but released five days later without charge. The following year he was re-arrested and his extradition to the US requested – on the basis of the same ‘evidence’ already dismissed by the British police. He has spent the last 12 years in high security prisons whilst extradition proceedings have been processed and challenged. During this time he has never been questioned, and no new evidence has been produced. Adel’s family has launched a petition campaign to highlight his situation (see http://www.gopetition.com/ petitions/justice-for-adel-abdelbary.html)

‘We have suffered very much in my father’s absence; my siblings have had to grow up without a father figure; we’ve had to grow up too soon and take responsibility from an early age, alongside our mother who has struggled to keep us together, bringing up six children without any family or friends beside her. In 1999 I was only 12 and now I am 24 and married with two children. It still hurts me that my father wasn’t present at my wedding. It hurts me to see my brothers grow into young men without my father by their side. It hurts me when my youngest sisters (aged 12 and 13) ask me how life was when my father was living with us, and look at my children and say they wish their dad was with them too so he could take them out and play with them…’

Mohammed Hamid’s daughter Yasmin told FRFI that her father is a kind man who, having had a tough start in life himself, was committed to supporting young people and, as a keen camper, would often organise trips to the countryside for young men from the inner-city, where they engaged in communal outdoor activities. On one occasion a paintballing trip was filmed (and funded) by the BBC. In the wake of the July 2005 London bombings, he was arrested, along with four other men, and charged and subsequently found guilty in 2008 of ‘providing terrorist training’. The four others were given determinate prison sentences with definite release dates, but Mohammed, who was also convicted of three counts of soliciting murder, was given an Indeterminate Sentence for Public Protection (IPP) with a tariff (minimum period) of seven and a half years.

IPPs were the brainchild of the Labour government and although the ConDem coalition plans to tinker with them, the changes are unlikely to affect sentences already in place. So Mohammed will only be released (once he has served the seven and a half year minimum term) if the Parole Board deems he is safe and has reduced the ‘risk of reoffending’ – a virtually impossible task for anyone who does not agree that they are guilty. Yasmin has launched a campaign to highlight her father’s situation and is encouraging supporters to write to him: Mohammed Hamid (A8114AG), HMP Long Lartin, Evesham, Worcs WR11 5TZ.

Detainee Y – out of prison but still imprisoned

Detainee Y is an Algerian human rights activist who fled torture and sought asylum in Britain. In January 2003 he was arrested as part of the so-called ‘ricin plot’ – an alleged conspiracy to produce deadly poisons and use them against the civilian population of London. In April 2005 he was acquitted of all charges, when the case against him and seven others collapsed. It became clear that there was no ricin and the ‘plot’ was a state fabrication, concocted for the key moment when the US and Britain were gathering support for the impending invasion of Iraq. Some of the jury members were so outraged by the case that they befriended the former defendants and the foreman Lawrence Archer has written a book Ricin! The Inside Story of the Terror Plot That Never Was.

After the July 2005 London bombing, Detainee Y was rearrested, served with a deportation order and taken to Long Lartin, where he was held for a further 29 months. In July 2008 he was released on bail by the Special Immigration Appeals Tribunal, which has conditions even more restrictive than those of the infamous Control Orders, and which he describes as ‘slow torture’. He is electronically tagged and must stay in his allocated flat for 20 hours a day; the flat is in on the outskirts of a town some distance from London and he is not allowed to go into the centre of the town. All his visitors are vetted and he is not allowed a computer.

Detainee Y, Adel and Muhammed are just a few of the prisoners of Britain’s racist ‘war on terror’. With the killing of Osama Bin Laden in Pakistan and the imperialist onslaught on Libya, there is every indication that the criminalisation of the Muslim community in Britain will continue. And it is not only Muslims who are under attack. The raids and ‘preventive’ arrests of potential protesters in the run-up to the royal wedding shows that the British state will move to criminalise any group it perceives as a threat. Solidarity with all criminalised communities and groups is vital. These prisoners must not be buried in the system without a voice. Support for political prisoners must be central to the building of a fighting anti-imperialist movement.

(First published on revolutionarycommunist.org) – You can read the article in it’s entirety below