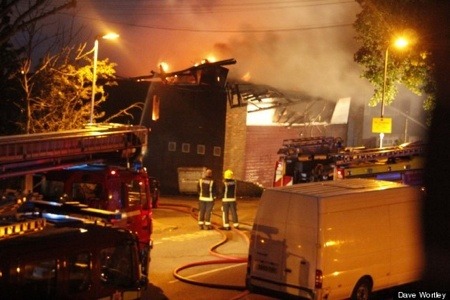 A Somali cultural centre has been burnt to the ground amid fears it was targeted in retaliation for the Woolwich murder of Drummer Lee Rigby. Counter-terror police launched an investigation into the blaze after the letters EDL – apparently referencing the English Defence League – were found scrawled on the wrecked building in Muswell Hill.

The blaze came as a war memorial which was attacked by vandals in central London last week was defaced again, this time with the words “Lee Rigby’s killers should hang”. Campaigners spoke of their devastation today while those who attended the cultural centre called the fire an “appalling attack” on a peaceful community.

The ravaged building was home to the Somali Bravanese Welfare Association – also known as the Al-Rahma Islamic Centre – described as a place for learning, cultural activities and prayer. It was cordoned off this afternoon as specialist teams examined the scene following the fire which broke out shortly after 3am.

Police said they were treating the blaze as suspicious following the graffiti discovery some hours later. Lul Abukar, 31, whose cousin Abu Bakar Ali runs the Somali Bravanese Welfare Association, said she spent most of her childhood at the community centre.

“It’s really a shock,” she said. “My sister and brother spent most of their time there too. We all went there to learn Arabic. It’s a very peaceful place run by my extended family. It’s really weird that it was attacked. It is not radical, nothing to do with all the terrorism that’s going on.”

Ms Abukar, an administration assistant at an interior design firm, from East Finchley in north London, said the centre was largely attended by children and functioned as a place of learning and prayer. “It might have been attacked because of what happened with Woolwich, a kind of retaliation,” she added. “It is a shock for everyone but I guess you have to stay strong. We wouldn’t want this to bring the community down.
“I don’t think this will – I hope it doesn’t.”

“It is very concerning when we know that, online, there is a huge amount of anti-Muslim hate. We know that. When it moves into the physical world, it is extremely concerning.”

Scotland Yard said specialist investigation teams, led by the Met’s counter-terrorism command, would conduct a “vigorous and thorough” investigation into the blaze which caused the building to partially collapse and saw one woman treated for shock at the scene.

Officers will now examine any potential connection between the fire and the graffiti. Police have refused to be drawn on whether they are linking the blaze to a backlash against Drummer Rigby’s death, which sparked outrage last month.

The Islamic Human Rights Commission (IHRC) said Muslims were now living in fear of a “wave of attacks”. Massoud Shadjareh, chair of IHRC, said: “Muslims feel scared right now and it is completely understandable. “Muslims have been physically attacked, mosques burnt down, cemeteries vandalised and social media is full of anti-Muslim hatred and violent threats towards Muslims. More needs to be done to protect the Muslim community.”

Ali Abu, 30, of the Somali charity BritSom, added: “The situation is very serious at the moment. We are appalled and deeply saddened by this attack against a peaceful community.”

Chief executive of the charity Victim Support, Javed Khan, condemned the “abhorrent” attack, adding: “This incident absolutely reinforces that extremism in all forms has no place in our society”.

The blaze was brought under control by 4.40am, shortly before officers discovered the vandalism of the RAF Bomber Command War Memorial in Green Park, central London. The memorial – and the Animals in War Memorial on Park Lane – were daubed with graffiti on May 27. It is thought ”Islam” was written on each of them.

The latest graffiti attack was covered up this afternoon by an RAF Benevolent Fund banner. Beneath it were the words: “Lee Rigby’s killers should hang.” The memorial is dedicated to the sacrifice and bravery of the 55,573 RAF crew who lost their lives in the Second World War and was unveiled by the Queen last summer. Kevin Carroll, of the EDL, said: “The EDL do not approve of any religious buildings being attacked.”

Police kept watch at cordons around the scene and maintained a visible presence in the area, in vans and on foot. A student who teaches Arabic to young people at the community centre said the incident had come as a shock. “It’s kind of sad,” said Hamza Habib, 21, a Muslim originally from Yemen who lives in nearby Finchley and studies civil engineering at Kingston University.

He added: “It’s not a good act, for someone to do something like that.” He said they had no history of trouble with the EDL. The community centre could be refurbished, Mr Habib said, adding: “I don’t know how long it will take.” He thought the incident might be connected to the death of Drummer Rigby and said: “People should react calmly to this.”

Other faiths were invited sometimes to the community centre to see what it was like. “We have had Christian and Jewish people to see us,” he said.

Javed Khan, chief executive of Victim Support, said: “Attacks against any faith group are abhorrent, and this incident absolutely reinforces that extremism in all forms has no place in our society. “Victim Support is here to offer practical and emotional help to any victims of hate crime. We would encourage those of all faiths who may have been affected by this incident and need support to call the Victim Support line on 0845 30 30 900. Lines are open until 10pm.”

Unite Against Fascism said on Wednesday night it would hold a vigil at the site of the fire. “We are deeply concerned about the fire of the Bravanese Centre and the reported EDL graffiti,” the organisation said in a statement. “Our thoughts are with the Somali, Muslim and indeed all the communities in the area that have been affected by this incident. We ask people to join us at the vigil.”

This article was first published in the Huffington Post on 6 June 2013. To read the original article, click here