It is a strange and unexpected sound in the middle of Bolivia, but everyday from the curved towers of a mosque in the city of Santa Cruz goes out the call for Muslim prayer. One would not be embarrassed to have never imagined that the Bolivian Islamic Center ever existed in this country heavily dominated by Roman Catholicism and with a majority indigenous population. It is one of a handful of Islamic centers serving a tiny population of Bolivian Muslims estimated to be comprised of 1,000 people. But despite its size the population has become the new subject of security interest of the United States.

The head of the Islamic Center, Mahmud Amer Abusharar, an elderly grey haired Palestinian refugee sitting in his front office appeared humorously bewildered when presented with recent US intelligence and media reports detailing him among others in a study of “extremist threats” in Bolivia.

“The Islamic center is a Bolivian institution, which has no discrimination, whatsoever, against anyone… white like the Europeans, or brown like the Bolivians… Thank God we call on the people to be good to be universal and honest, not to be aggressive,” Abusharar told me.

In a June 6th piece, Fox News published “Bolivia becoming Hot Bed of Islamic Extremism, Report Concludes” based on a May 2009 US intelligence report on Bolivian Muslims. The reporter,  Nora Zimmett, cites the report to paint the potential threat of advancing terrorism in the Western Hemisphere from “Anti-American” attitudes of Bolivian Muslims, the leftist Bolivian government’s increasingly strained relations with Washington, and budding relations with Iran. She quoted an unnamed US intelligence official, “There’s a theory that they may believe — Latin America, particularly with its Leftist leanings in recent years, may be more receptive to the anti-American-type rhetoric that we’ve been accustomed to hearing from Iran…The goal of the [Islamic] revolution is not just for Iran, but they feel an obligation to spread it. So we see their outreach as not just an economic one, but also a cultural one. Now, is there potential that could be capitalized by some other for some more nefarious purposes? There’s a lot of possibilities out there.”

While Fox News and their anonymous source push the potential likelihood of such a threat the actual report prepared by the Open Source Center (OSC) of the Director of National Intelligence is void of specific or possible security threats and concludes that Bolivian foreign relations are “not a result of Bolivian Muslim influence.” Instead the report’s dissection of eight Bolivian Muslim organizations directs attention to critical attitudes of United States and Israeli policies held by local religious leaders. The Islamic Center is described having the supposed contradictory view of both voicing support for “open-mindedness and peace” while “numerous on-line statements reveal a strong anti-US position”, citing statements in opposition to the US invasion of Afghanistan: “Today we see the US declaring armed Jihad against terrorism. They aim their bombs at UBL and Afghanistan, whom they financed and trained.”

“The fox is known to be a most sneaky animal,” Abusharar said referring to the reports. “Criticism is normal. In a democratic country, if we want to keep democracy we cannot behave like this.”

“These people, they want something. To convince the US government they have to write something.”

“I don’t think the CIA needs to write a report like this. They know me personally,” describing previous visitors whom he believes work for US intelligence services. “I opened all the doors and you know what I told them, ‘Take all the photographs you want’.” 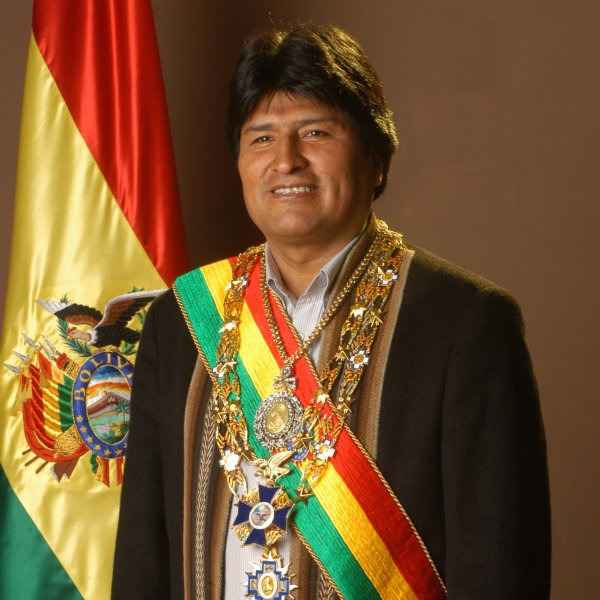 The government of Evo Morales which has initiated pro-indigenous and socialist reforms has butted heads with the United States in recent years. Contentious issues include expelled US diplomat Philip Goldberg and other US agencies links to violent rightwing opposition, the nationalization of natural gas exploitation, and supposed setbacks in Bolivian anti-narcotics measures following the expulsion of the DEA for alleged political activity. Evo Morales described the recent suspension of Bolivia from the Andean Trade Promotion and Drug Eradication Act as based on “false accusations of the Obama administration against the Bolivian government to suspend the tariff preferences and in a political program of open interference by the United States government against the Bolivian people.”

The OSC report naming the Bolivian Islamic Center additionally details local Muslim protests against the Israeli offensive in Gaza which sparked friction between the two countries. Morales expelled the Israeli consulate in response and called for the Israeli leadership to be tried for war crimes.

In May, the Associated Press published details of a “secret Israeli government report” claiming Bolivia is supplying Iran with uranium for its nuclear program. Bolivian Mining Minster Luis Alberto Echazu dismissed the allegation pointing out that no uranium mining operations exist in the country while Government Minister Ramón Quintana was contemptuous: “Only a clown would permit such barbarities to happen. Since it’s so, it must be said that a certain Israeli agency is an agency of inepts, incompetents, and clowns.” Such a theory of nuclear relations between Bolivian and Iran had previously been advanced by the Washington Times, based on hearsay speculation in a February 10th piece, “Mineral Wealth, Political Weapon”.

Growing relations between Bolivia and Iran have garnered much attention and alarm, heralded in 2007 a state visit by Iranian President Mahmoud Ahmadinejad to La Paz and the promise of $1.1 billion in aid to Bolivia. In January, Defense Secretary Robert Gates stated before the Senate Armed Services Committee, “I’m concerned about the level of, frankly, subversive activity that the Iranians are carrying on in a number of places, in Latin America, particularly South America and Central America. They’re opening a lot of offices and a lot of fronts, behind which they interfere in what is going on in some of these countries.” However few of the publicized cooperative loans and projects between the two governments have yet to follow through in practice, a catch which has not dissuaded the interest of many journalists. The McClatchy reporter Tyler Bridges wrote a full length article centered on the construction of an Iranian financed dairy factory outside La Paz.

United States preoccupation with the spectacle of Iran appears so great that the OSC report on Mulsim Bolivians includes a seemingly misplaced section on Iranian-Bolivian relations, lacking any stated connections to the local Muslim community. Abusharar was staunch during the interview in his views of Iranian politics. “For me, the Iranian government is not Islamic. Since when does Islam permit the creation of terrorists?”

Perhaps few have stretched reality to the limits in search of the extremist Islamist threat more than Douglas Farah. Farah, a former longtime Washington Post foreign correspondent and analyst for the Washington D.C. based security and counter-terrorism think-tank International Assessment and Strategy Center published in June an alarmist report “Into the Abyss: Bolivia under Evo Morales and MAS”. He argues the existence of an emerging Islamist threat in Bolivia via Iran and Venezuela. The report, littered with erroneous facts and discredited accusations, claims without reference to any collaborating sources or material that Venezuelan military advisers are instructing their Bolivian counterparts in “asymmetric warfare” terrorist tactics inspired by “radical Islamists”.

While the emergence of a military threat from Morales’ Bolivia has so far been speculative at best, La Paz has expressed alarm over a number of US actions. Coinciding with the 2005 Presidential elections 500 US troops were stationed through 2006 at the Estigarribia military base in Paraguay, 200 kilometers from the Bolivian border and prompting fears the US would support a military coup to halt a Morales victory. The presence was partly justified by a highly dubious theory of Hezbollah terrorism threats in the Tri-Border region [see Kenneth Rapoza’s 2003 expose of this scare, http://www.counterpunch.org/rapoza05152003.html ] between Paraguay, Argentina, and Brazil. Following Morales’ election the US removed 28 anti-aircraft missiles from the Bolivian military stockpile without consulting civilian leadership. In May, the US military war game Unified Quest 2009 simulated US Army intervention in Bolivia during a right-left civil war “following the failure of a leftist regime”. Evo Morales recently called plans for seven US military bases in Colombia a threat to the region’s democracies.

Strangely lacking in the fearful speculations surrounding Bolivian Muslims and Bolivian-Iranian relations is a consistent and concrete reason why such links present a danger besides the nebulous and catch-all category of “Anti-American”. Jose Brechner, who has warned of the dangers of Islamic radicalism in Bolivia even prior to Evo Morales’ election, is instructive on this point. Brechner is a Bolivian journalist and political commentator who writes for various Latin American news journals and magazines and was a founder of the rightwing Nationalist Democratic Action party, the now defunct political organization of former US backed Bolivian dictator Hugo Banzer. As in the March 2009 opinion “Bolivia, Israel, and the Muslims” , he describes the threat in unabashed xenophobic terms.

“There is fear in Bolivia, and a lot of it, because those who do not know the frantic Indians do not know terror. The closest to the Bolivian altiplano indigenous are the hordes of Muslim fanatics.

“It is not by chance that the Arabs are strengthening bonds with Morales, they have through the Indians the human material favorable to expand the Jihad. The Muslim savagery fits perfectly with that of the Bolivian altiplano.”

Given the persistently alarmist and speculative nature of attention given to Bolivia’s Islam connection it is difficult not to suspect that an element of old fashion racism is at work, better suited to the era of colonialism.

Abusharar of the Islamic Center related the Fox News article to the story of a friend in 1950s Palestine who stripped naked in order to prove to a group of American tourists that he did not, as they had heard, have a tail.

“We have to be very careful of this cancer. These are the real enemies of the United States. They are trying to show that everyone is an enemy of the United States, it is not true. I have met many Americans in my life and they deserve respect. They teach their sons to tell the truth, but once they read the rubbish of a person like this problems start for the United States… If we have intelligent governments, they will not listen to this rubbish.”

Abusharar concluded the interview, “And I don’t know why the report calls me a Sheikh. I am not a Sheikh.”