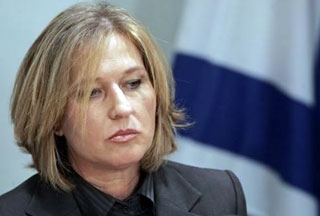 Based on a report published by Israeli daily Haaretz, the former foreign minister canceled her participation in a Jewish conference in London after a British court issued a warrant for her arrest.

“Scotland Yard advised the organizers of the Jewish National Fund conference in northwest London that the former foreign minister had canceled her scheduled address to the ass embly over threats of a possible lawsuit by pro-Palestinian groups”, the report said.

The warrant was issued for “war crimes” when she was foreign minister during Israel’s December 2007-January 2008 offensive which left over 1,350 Palestinians dead in the Gaza Strip.

Livni’s office however denied the report, saying in a statement that her trip was canceled two weeks ago due to a scheduling conflict.

Israel’s envoy to London, Ron Prosor, has also claimed that he had conferred with officials in the British Ministry of Justice and that they denied such reports.

Prosor said the officials have not been informed about any criminal complaint or arrest warrant against the Israeli former foreign minister.

The group filed a request with the Westminster Magistrates Court to issue the warrant over Israel’s war crimes in the Gaza Strip.

Questions to the Charity Commission…