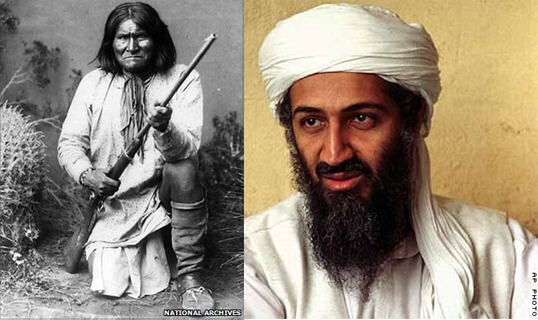 Question: Did President Barack Obama point out to his military brass that such a disrespectful use of Geronimo’s name was inappropriate? Probably not.

In my book Pagans in the Pagans in the Promised Land(Fulcrum, 2008) I use the theory of the human mind (cognitive theory) to explain the “cognitive unconscious” of the United States. Certain ingrained traditions of thought, both conscious and unconscious, have been used for generations by U.S. government officials. Such thinking has resulted in the development of predominantly anti-Indian U.S. federal Indian laws and policies. The result has been laws and policies that have proven detrimental to Indian nations and peoples.

George Washington, in 1784, used the analogy “the savage as the wolf” to refer to our Indian ancestors as less-than-human “beasts.” As Henry Wheaton said in his Elements of International Law, “The heathen nations of the other quarters of the globe were the lawful spoil and prey of their civilized conquerors.” Thus, one of the normative American metaphors throughout the history of the United States has been “Indians Are Enemies.” We’re talking about a U.S. tradition of dehumanization and dominance used against our nations and peoples.

From the perspective of non-Indian colonizers, our indigenous ancestors were enemies to be uprooted from the vast extent of our traditional lands and territories and confined to “reservations” in remote areas, under U.S. control. Thus, off the reservation is a common idiom used by television journalists and commentators to refer to someone being a “renegade,” with the connotation being an enemy “who chooses to live outside laws or conventions.” However, it is important to keep in mind that U.S. laws and conventions have been imposed on our nations and peoples. Someone who has gone off the reservation is considered to be an “outlaw,” which in our case is outside the bounds of imposed laws and policies of the United States.

Geronimo’s life story is a direct result of the invasion of the Apache territory and attempts to subdue the free and independent Apache. After his family was massacred by Mexicans in 1851, Geronimo became a Chiricahua Apache leader who fit perfectly into the non-Indian metaphorical frame “Indians Are Enemies.” He and a small group of fellow Apaches brilliantly eluded capture by 5,000 United States Army soldiers, 500 Indian scouts, and 3000 Mexican soldiers. The desert terrain was steep and formidable. The temperatures were extreme: intense cold and blistering heat. Geronimo and his band had very little food or water. What those Apaches accomplished is very likely one of the most amazing physical feats of stamina in the history of the human race. He finally surrendered in 1886.

In the reported stories of Osama Bin Laden being killed by U.S. military forces, bin Laden was code-named “Geronimo.” According to a CBS news report, those who came up with that “inappropriate code name” apparently “thought of bin Laden as a 21st-century equivalent” of Geronimo. In other words, the code name was based on an extension of the metaphor “Indians Are Enemies” to “Geronimo was a Terrorist,” thus perpetuating the U.S. tradition of treating Indian nations and peoples as enemies.

Geronimo was fighting against the invasion of his country and the oppression of his people. He did not invade the United States. Rather, Spain, Mexico, and then the United States invaded the Apache Territory and the territories of hundreds of other Indigenous nations. Horrific atrocities were committed against the Apache, and men such as Geronimo, whose family was massacred by Mexicans, did not hesitate to retaliate. Geronimo died a “prisoner of war” in 1909.

Steven Newcomb (Shawnee/Lenape) is co-founder and co-director of the Indigenous Law Institute, author of Pagans in the Promised Land: Decoding the Doctrine of Christian Discovery (Fulcrum, 2008), and a columnist for Indian Country Today Media Network.

PRESS RELEASE: We condemn the Boston attacks but it is too early to speculate