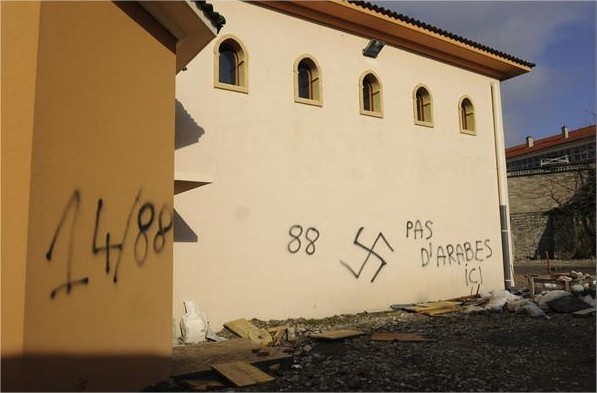 [AFP via CCIF, 19 November 2011, En savoir plus en français]  Slogans using racist Nazi ideology were found this morning on the walls of the mosque in Villeneuve-sur-Lot, whose front door showed signs of an attempted arson, said the police and the  Public Prosecutor of Agen.

The facts were discovered at 7:30 by a staff member of the mosque. With black paint, the writings of “Islam out of Europe”, a cross and the number 88, referring to the eighth letter of the alphabet for “Heil Hitler” were painted on the walls. A wooden pallet was also on fire against the front door but did not cause severe damage.

A team of technical investigation police surveyed the scene and a bottle “containing a liquid which could have accelerated the fire” was discovered on site, according to AFP. An investigation was opened for “degradation of religious and public monument and attempted destruction by fire”.

This incident is not the first in the department of Lot-et-Garonne. In fact, August 8, 2010, anti-Semitic writings had been found on the memorial of the deportation of Marmande, and in November 27, 2010, racist writings were also found on the mosque of the city. At Agen, 1 January 2005, shots were fired against the walls of the mosque at night, leading to a protest march of a thousand people.