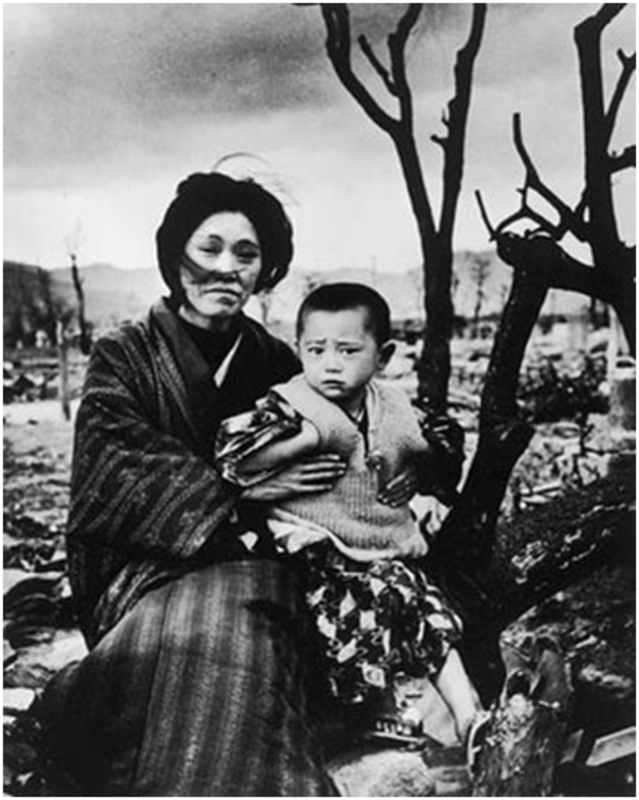 “The racism against and dehumanising of the Japanese people at the time of the Second World War mars this issue further. The second day after the bomb in Nagasaki, Truman stated, “The only language they seem to understand is the one we have been using to bombard them. When you have to deal with a beast you have to treat him like a beast.”[24] Caricatures depicting Japanese as less than human, e.g. monkeys, were also common in the U.S. during the war.[25]

“The lack of justice with respect to the U.S. being made to pay compensation to the Japanese people (according to the Peace Treaty, the U.S. is not bound to make reparations) and, to date, the absence of even a verbal apology or statement of regret by the U.S. government (discussion forums show that Americans are emphatic that they should definitely not apologise for the bombings of Hiroshima and Nagasaki and that they have nothing to apologise for) are staggering.”

Hajira Qureshi, writing for IHRC’s Genocide Memorial Day project in 2010, highlights the atrocity of the bombing of Hiroshima and Nagasaki by the USA. Read the full article here.Today is the anniversary of the first bombing. It is worth reflecting on the pattern that has been established by the USA from well before this heinous event until today – see e.g. Omar F. Ahmed’s essay on the US aggression in the Phillipines. The demonisation of the so-called enemy allows for the continuous aggression and violence with impunity. Yesterday US drones bombed Yemen killing 7 alleged ‘terrorists’. Whoever they may or not have been, without a fair trial they cannot be held to have been guilty of anything. Even if the narrative of targeting ‘terrorists’ is accepted, reports show that 98% of those killed in drone strikes are people – including children, women and the elderly – deemed to be civilians.

The continuum of such horrors needs to be understood if oppressed peoples are to ever create an alternative and truly liberatory discourse.

Visit this link to view photographs of Hiroshima before and after the attacks.