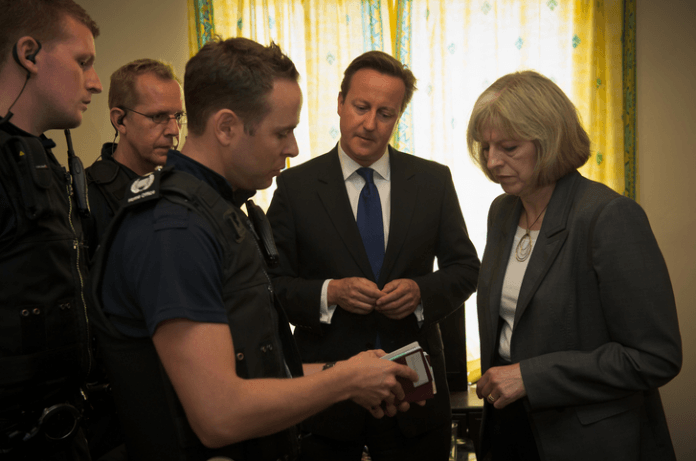 Fast forward four years and plus ça change. This is what the PM announced last week:

“Islamist extremism, is an ideology. It is an extreme doctrine…….And like any extreme doctrine, it is subversive. At its furthest end it seeks to destroy nation-states to invent its own barbaric realm. And it often backs violence to achieve this aim….But you don’t have to support violence to subscribe to certain intolerant ideas which create a climate in which extremists can flourish. Ideas which are hostile to basic liberal values such as democracy, freedom and sexual equality.”

So there we have it. The conveyor belt theory of terrorism where Islam is the first step of a journey along which extremist ideology is a staging post and acts of terrorism the possible destination. The theory is predicated on the assumption that terrorism would not exist without a benign environment (or in the infamous words of arch neocon and ex-US defence secretary Donald Rumsfeld, the “swamp”) in which it could incubate such as that allegedly provided by Muslim communities harbouring illiberal views.

These are the members of the Muslim community whom Cameron described in his speech on 19 June at a security conference in Slovakia as people who “quietly condone” extremism, who “don’t go as far as advocating violence, but who do buy into some of these prejudices”.

Viewed against this backdrop it is more fitting that we discuss the anti-terrorism policy continuum rather than any conveyor belt terrorism theories, not least because it is now widely acknowledged to be devoid of any factual basis. Short of the nautch girls in the Quilliam Foundation who will dance to whatever tune Downing Street plays, and the Zionist neocon Islamophobes in the Henry Jackson Society, no one including the government’s own terrorism experts, actually buys this tripe anymore.

In June, Theresa May’s most senior counter terrorism adviser warned against portraying Muslim communities as “intrinsically extremist”. Charles Farr, director general of the Office for Security and Counter-Terrorism, said there was a “risk” of oversimplification given around 2.7 million Muslims live in Britain but as few as 100 may have joined ISIL. His OSCT has itself identified three main factors that give rise to terrorism as foreign policy grievance, Islamophobia, and the lack of a sense of belonging.

In July 2010, a leaked memo prepared by officials for coalition ministers on the cabinet’s home affairs subcommittee concluded that it was wrong “to regard radicalisation in this country as a linear ‘conveyor belt’ moving from grievance, through radicalisation, to violence … This thesis seems to both misread the radicalisation process and to give undue weight to ideological factors”.

So if anti-terrorism policy isn’t being informed by the government’s own analyses and independent academic research just what is propelling it?

It is becoming increasingly clear that official anti-terror discourse is being driven by an extreme right-wing ideology rooted in the desire to control and shape British Islam. Through PREVENT, the elastically expansive anti-radicalisation programme that is far and away the biggest of CONTEST’s four strands and now a legal duty on everyone from nursery teachers to doctors, the government has enshrined in law the state surveillance of Muslims from cradle to grave. Muslims are to be monitored for signs of extremism in every walk of life. Universities are to screen speakers for ‘radicalism’, mosques are expected to control what their imams say on pain of being closed down, Muslim charities face onerous scrutiny for links to ‘radical’ groups abroad, and individuals have to self-censor what they download lest their reading material is deemed to constitute ‘terrorist matter’.

The government isn’t just after controlling what is said but also what is being thought. PREVENT has created a category of thoughtcrime for Muslims by which certain ideas and beliefs such as the right to armed resistance, wear religious attire or conscionably opposing homosexuality is referrable to the PREVENT police.

More than that PREVENT now includes a positive expectation to uphold what are described as British liberal values. So it is not enough for Muslims to divest themselves of their antiquated beliefs, they must now also subscribe to the prevailing social and political norms, whatever that means. David Cameron is fond of presenting this new assimilationist policy as ‘muscular liberalism’. I prefer to call if soft fascism. If Muslims won’t voluntarily adopt secular liberal values they will be forced to do so kicking and screaming in a latter day mission civilisatrice.

This is the message that is being sent loud and clear to Britain’s Muslims. The Trojan Horse affair in which the Dept of Education, led by Zionist stalwart and Islamophobe Michael Gove, concocted a national security panic by fabricating an extremist plot to take over a handful of inner city Birmingham schools, signalled that even in areas where Muslims are in a majority, their religious values should play no part in the education of their children.

Nor should they be allowed to infect political discourse. The removal of Britain’s first elected mayor Lutfur Rahman from his position in the London borough of Tower Hamlets was also designed to show Muslims that their convictions cannot shape the country. The spin doctors have devised a new term for Muslims exercising their right to compete for and hold political positions. It’s called entryism. Apparently it’s the process whereby extremists consciously seek to gain positions of influence to better enable them to promote their own values. Wait a minute, doesn’t that like the right wing of the Tory Party?

So there we have it. The new orthodoxy in which Muslims are designated second class citizens, all the while subjected to a rigorous ideological regime to engineer a shift from religious conservatism to secular liberalism. Where the British Empire once employed the blunderbuss, today its scions prefer intrusive lifelong surveillance and punitive legislation. But that’s not the worrying part. The institutionalisation of Islamophobia has occurred with barely any opposition from a wider society that has either been duped or scared into accepting the official narrative and the concomitant limitations on its own freedoms and rights. A dangerous cultural shift is taking place in our politics which has repercussions for generations to come. But quite how that is supposed to tackle terrorism remains anyone’s guess.