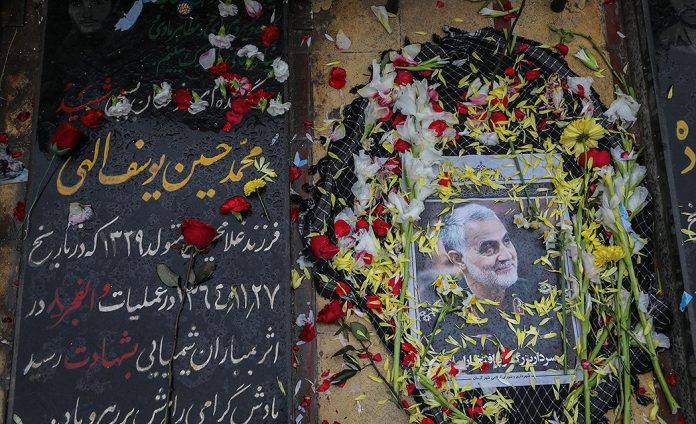 Massoud Shadjareh, chairman of the Islamic Human Rights Commission, says that the West’s use of drones to murder their political foes needs to be challenged so that politicians can no longer kill with impunity.

January 3 marks the first anniversary of the extra-judicial execution of the Iranian general Qassem Soleimani by the United States.

His assassination typified the new normal that has come to characterise Western states’ exercise of hard power at home and abroad.

Soleimani was killed by missiles fired from a drone while he visited neighbouring Iraq underscoring the status of UAV’s (Unmanned Aerial Vehicles) as the weapon of choice for countries wishing to efficiently eliminate their foes.

The ability to quietly and efficiently take out an enemy anywhere in the world often without any claim of responsibility or fear of attribution has greatly incentivised countries to sidestep international law.

Of course, extra-judicial assassinations are nothing new in modern international politics. Zionists fighting to establish the state of Israel adopted the policy in 1944 and have murdered hundreds of opponents since. In 2006 the policy received the green light from the Israeli Supreme Court.

However, since the September 11, 2001 attacks on the U.S. their use by Western powers has escalated under the pretext of the “War on Terror” to the extent that they are no longer seen as anything extraordinary. They have become so commonplace and publicly accepted as an arm of warfare that even the revelation in 2017 that the RAF was working through a “kill list” to take out high-profile “terrorist” targets from other nations (as well as Britons) failed to excite much protest.

Extra-judicial assassinations cannot be justified legally or morally. Even their utilitarian value is highly questionable.

Firstly, there is no effective oversight or accountability of states carrying out extra-judicial assassinations. Conveniently, their evidence is always “classified” so it cannot be tested.

Secondly, where evidence is flimsy or non-existent, as in the case of the Soleimani murder, they roll out the anticipatory self-defence justification (the U.S. claimed he was plotting terrorist attacks on its citizens in the Middle East).

However, pre-emptive self-defence is not a legal justification for “targeted killings”, as they have euphemistically come to be known. International law is unequivocal on their illegality in circumstances where a threat is not imminent and concrete. The fact that a nation or figure is hostile is not in itself sufficient cause to deploy physical force against them.

Indeed, were that to be the case the world would soon descend into a bloody free-for-all as rival powers sought to pre-emptively destroy potential threats.

These points were not lost on Agnes Callamard, UN special rapporteur on extrajudicial and arbitrary killings, whose inquiry into the Soleimani assassination returned a verdict of “unlawful.”

“No evidence has been provided that General Soleimani specifically was planning an imminent attack against U.S. interests, particularly in Iraq, for which immediate action was necessary and would have been justified,” Callamard said. Echoing many critics of extra-legal military action, Callamard also said it “gave a pass to terrorists.”

Indeed, no one can reasonably argue that extra-judicial killings have made the world safer. The resort to illegal methods has only served to highlight the double-standards that inform Western foreign policy. Moreover, if states refuse to abandon due process when it suits them and violate international law, why should anyone reasonably expect non-state actors such as freedom or opposition movements to do so?

Civilian casualties are never far from any discussion of extra-judicial assassinations. Invariably, they result in additional deaths and injuries which are passed off as “collateral damage,” as if the lives of innocents are expendable and essential for some politically expedient “greater good.” Eight other people were killed with Soleimani, the majority of whom did not form the intended target.

The murder of civilians simply widens the circle of the wronged and aggrieved and invites more retaliation in a never-ending spiral of conflict.

It is high time the international community sees extra-judicial killings for what they are and deals with them accordingly. They are illegal and a crime against humanity. They are a violation of due process, the right to life, and the prohibition of arbitrary killings stipulated in several international treaties.

They endanger global security by locking the world into a dangerous spiral of limited tit-for-tat warfare which has the potential to blow up into bigger and wider conflicts at any moment.

Initiating criminal proceedings against the murderers of General Soleimani may not have any practical consequences on the perpetrators since they are unlikely to ever be brought to trial, but it will at least send out the message that the world will no longer allow politicians to murder with impunity.

This article was first published on 5Pillars.com