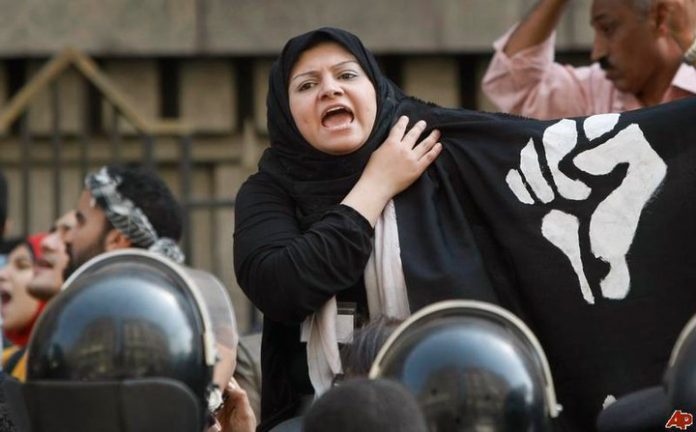 And so it has begun. The drip, drip demonisation of the possible Egyptian other. And at the end, or the beginning, of it all, is “Israel”. It is a sad indictment of – indeed it is the defining criticism – of the ‘West’, that its leaders, commentators, its media and senselessly even parts of the fifth estate (from so-called proletariat voices to NGO activists) speak of a fate worse than Mubarak.

John Humphreys, presenter of BBC Radio 4’s flagship news programme Today (31 January) posed the dilemma with a supposed reference to Franklin D. Roosevelt’s philosophy vis a vis previous dictators: “He may be a son of a bitch, but he’s our son of a bitch.” The alternative, as is being posed is that, in a vacuum created by the (inshaAllah) coming revolution, ‘extremism’ takes the reins of power. Take a step back.

We know, for sure, that all such references to extremism are poor code for ‘Islamic’, ‘Islamist’ or simply just ‘Muslims’. Others have been less circumspect – Tony Bliar has made clear that he fears the rise of the Muslim Brotherhood. US, UK and European responses to the situation in Egypt are tepid at best, with leaders from Merkel to Cameron and their cronies like Clinton keen to stress they have spoken with Mubarak and asked him to consider reform. If he is an aged, delusional dictator, what excuse do these luminaries of the Western world have for ignoring the ‘facts on the ground’ that Egypt’s people are determined about one thing and that is that Mubarak must go? Surely none, and that is what bodes ill.

Bliar Blair’s comments almost a week back, may not be the usual Islamophobic rants of this famed destroyer of nations. The Quartet, whom he supposedly represents has not distanced itself from the ideas he espoused. Is there still support for Mubarak or a successor (military or not) of his ilk? Perhaps Reuters’ reporting of Benjamim Nethanyahu’s latest comments shed light on where this line of thought is in fact is coming from.

Nethanyahu is reported by the news agency to have said:

Reuters own observation is as illuminating of the problems with the whole discourse – that concern about what may come if, as indeed it may well be, Islamic in some nature:

“Netanyahu had earlier urged his cabinet to refrain from commenting on the unrest in Egypt, as Israel watched on the sidelines to see whether Mubarak would survive or a similar-minded democratic government took his place.”

A similar minded democratic government. That is the ideal. To clarify the mind (insofar as any observer can from his actions in power) of Mubarak, we can summarise thus:

After all of this comes the economic devastation.

As world leaders and vile, violent regimes go, they don’t come much worse than Mubarak. The few that compete with him – Ali Abdullah Saleh in Yemen, the deposed Ben Ali in Tunisia, the Saudi authorities, well they’re in a league of their on. The revolutionary governments of Iran, Venezuela, Cuba, with all their very real flaws, don’t come close – unless of course you believe the hype.

And hype there is by the bucket load. Even the otherwise excellent Democracy Now, has promoted a line that the Muslim Brotherhood are irrelevant to the ongoing demonstrations – that the chants of ‘Allaho Akbar’ are drowned out by chants of “Muslim, Christian, we are all Egyptians together”, as if the two conflict, as if the Muslim Brotherhood represents exclusivity and chauvisim, and not the dynamic social and political movement with very real relevance if not to the calling of protests but to the actual lives of the people.  As a social movement it has and has demonstrated it has served the masses as it has declared.  For the peoples’ aspirations, as a political movement it has sought representation in all previous ‘elections’ and been heavily punished by the authorities for trying.  Share their ideas or not, the Muslim Brotherhood clearly have social and political pedigree.

The repeated mantra that the Muslim Brotherhood are organised (as if this is in and of itself a bad thing), is also frequently heard – a pre-emptive justification in the eventuality that what follows Mubarak may involve the Brotherhood to a greater or lesser extent. The idea that they may have representative legitimacy, the idea that as a political and social movement with a radical (in the best sense of the word) history makes them natural leaders of revolutionary change for the better is ignored by those who should know better amongst radical activists.  Many of the aversions sadly boil down to the word Muslim in the name, and the word Islam in its ideological make up. These aversions are not based on real issues – real critique is something that the Muslim Brotherhood in Egypt to its credit, has always accepted and encouraged. They are based on phobic representations of Muslims and in particular of Muslim activism and political and social aspiration based in any amount, way, shape or form on Islam. Instead of viewing the positive achievements of such social and political movements, including the empowerment of women and the realisation of policies and ideas that develop and respect minority rights, we hear fearfulness of the ‘crazy shariah brigade’ who chop off hands and alternately lock up or stone women.

This trend amongst the fifth estate, is not prevalent but it gives succour to the powers that still be, who deliberately underplay or demonise the Brotherhood, while trying to now control the post-Mubarak era. In short, as Nethanyahu is reported as opining – the succession to Mubarak must be likeminded. Likeminded, essentially means Mubarak by another name: no serious constitutional change, no serious change in economic policy, no change on Israel, no real change that allows Islam or any other new or tested force for any type of change. If this ‘likemindedness’ is sought by the US and its allies, it should be as no surprise to those committed to struggling for justice world-wide from whatever type of movement. By falling in with similar rhetoric that demonises one of the revolutionary forces for change in these momentous days, civil society is haplessly allowing ‘likeminded’ succession and not real change, including representative government, to be the outcome of these protests. It is an insult to both the dead and those who defy Mubarak and his regional brothers upon fear of death, if we help that happen upon the spurious notion that we are trying to stop Islamists getting a hold.

Arzu Merali is one of the founders of Islamic Human Rights Commission.  She is the co-author of The British Media and Muslim Representation: The Ideology of Demonisation which can be downloaded without charge here or bought from here.