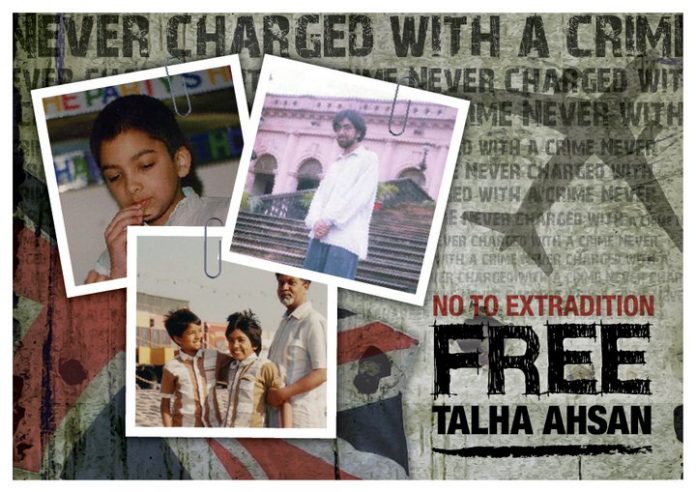 It has been five years since Talha Ahsan has been in prison without trial or charge, and is awaiting a decision from the European Court of Human Rights regarding an extradition request filed by the US government.

Ahsan, who suffers from aspergers syndrome and was known by friends and family as a ‘sincere and caring’ individual, seems the antithesis of the profile we delineate for a terrorist.

So why was Ahsan detained by British authorities? He is accused by the US of terrorism-related offences arising out of his alleged involvement over the period 1997-2004 with a series of websites which were used to recruit people to join Chechen and Afghan Mujahideen fighters linked to Al Qaeda.

Arzu Merali , director of the Islamic Human Rights Commission, said “Talha’s case is yet another outrage of the so-called anti-terrorism regime that has ruined so many thousands of lives in the UK.

The problem lies in the following dilemma: we either have various sorts of dissidents in our country – like Ahsan – who conspire against our countries safety, or we have western governments arbitrarily detaining innocent civilians for unthinkable reasons.

What’s pretty amazing, however, is the complete lack of attention the media have given to the story of Ahsan. His detention has been overlooked, and in doing so, has not allowed for public outrage. Ahsan has always denied wrongdoing but The Extradition Act 2003 only requires the USA to show ‘reasonable’ suspicion in order to request the extradition of UK citizens into its penal system.

He has never been arrested or questioned by British police, despite this happening to a number of local men in December 2003 for similar allegations – all of whom were released without charge. No prima facie evidence (evidence that – unless disproved – would be sufficient to prove a crime) is required to request the extradition of UK citizens.

Such a frightful invasion of sovereign citizenship can also be cited via the case of Gary McKinnon. Accused of hacking US government networks (again, no prima facie evidence has been presented by US authorities), his case was appealed in front of the House of Lords.

The appeal was rejected by Lord Brown of Eaton-under-Heywood who said that extradition proceedings should “accommodate legal and cultural differences between the legal systems of the many foreign friendly states with whom the UK has entered into reciprocal extradition arrangements”. Lord Brown clarified that foreign policy and judicial proceedings are far from mutually exclusive – a clear systemic flaw.

The extradition situation regarding Ahsan also brings to light how the government pilfered the ethics from judicial process in order to pursue foreign policy objectives – a pilfering highlighted by Lord Brown.

Liberty has long campaigned against unfair extradition laws. Liberty Campaigns Co-Ordinator Sabina Frediani said: “Never were justice and the law so out of sync as in the case of Britain’s rotten extradition arrangements. No one should be sent anywhere – be it the US, Europe or elsewhere – without good reason and without a case first being made in a local court.”

In addition to the problems associated with prioritising foreign policy objectives at the expense of sovereign citizen rights and judicial ethics, the US authorities plan to incarcerate Ahsan in the United States Penitentiary Administrative Maximum Facility. If convicted he will spend the rest of his life in “Supermax” solitary confinement – 70 years in ADX Florence.

In 2006, the U.N. Committee Against Torture expressed concern about “prolonged isolation periods” and “the extremely harsh regime” in US ‘Supermax’ prisons (the United States Penitentiary Administrative Maximum Facility being one of them). It determined that “the effect such treatment has on an inmate’s mental health…would violate the Convention Against Torture and Other Cruel, Inhuman or Degrading Treatment or Punishment”, ratified by the United States in 1994.

The European Court of Human Rights, in its judgment in July 2010 on US ‘Supermax’ prisons, also noted that “complete sensory isolation, coupled with total social isolation, can destroy the personality and constitutes a form of inhuman treatment which cannot be justified by the requirements of security or any other reason.”

What lengths should the government go to protect the state? Utilitarianism (the idea of the greatest good for the greatest number) dictates that detentions such as Ahsan’s would be permissible upon the consequentially diluted national threat. Our sovereign citizenship is a principle enshrined in law. It forms part of the unwritten constitution and contract between citizen and government.