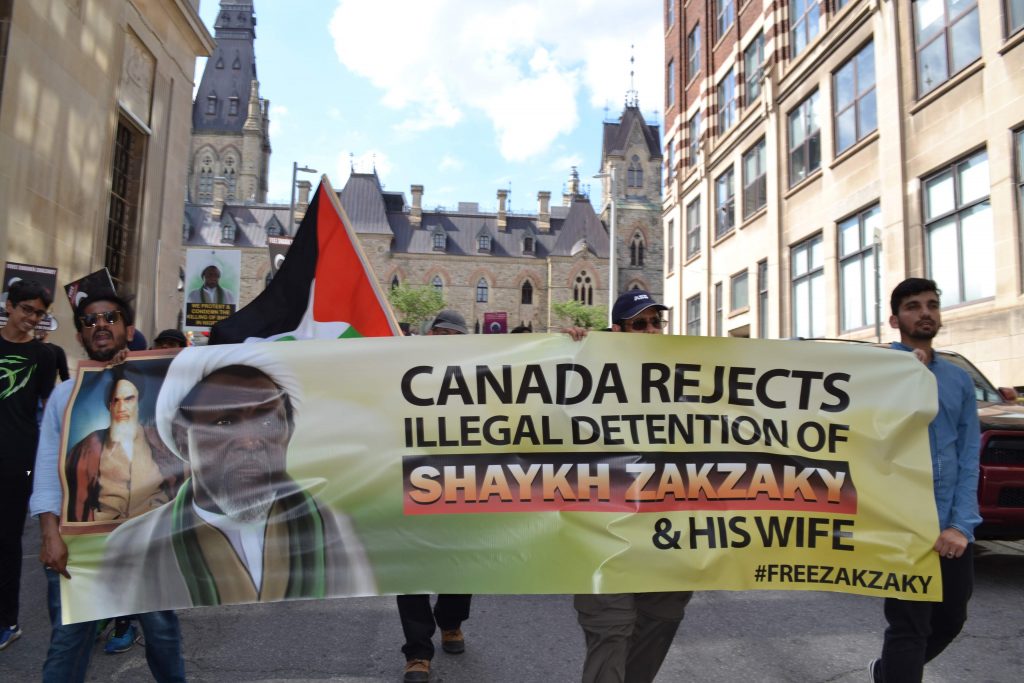 Today once again the court adjourned proceedings to decide whether Sheikh Zakzaky should be freed to receive critical medical treatment. In the last two weeks concerned campaigners and organisations intensified the global #FreeZakzaky protests and rallies; at least a dozen peaceful protesters were killed by security forces in Nigeria and in its latest move the under pressure Buhari Government used the courts to proscribe the peaceful Islamic movement of Nigeria. Human rights organisations condemned this cynical move of the Buhari regime.

Click here for the updated action after the court hearing of Sheikh Zakzaky. Click here to watch a short video clip about today’s decision and what you can do. As the court once again adjourned the hearing requesting to release the Sheikh, we request campaigners to contact your minister of foreign affairs and demand their immediate intervention in the deteriorating situation in Nigeria. Please forward any responses you receive to us on wajahat@ihrc.org and keep the pressure up by continuing to send follow-ups. A model letter is provided below in the Action Alert.

Click here to watch the message from IHRC chair Massoud Shadjerah about our fundraising and campaigning for those injured by police and army violence and the families of those killed. You can donate for Qurbani to help the families of those killed.  Please CLICK here for more information to support the victims of police and army brutality in Nigeria and do share the fundraising video provided. They are in urgent need of our support please DONATE here and encourage others to do the same.

ACTION ALERT:
Please look at the five things you need to know and do alert, if you haven’t already.  Those of you also wishing to contact the Minister of Foreign Affairs in your country can do so using the addresses below.  A model email is also provided should you wish to use it.  Please keep all correspondence polite.

Model Email
Subject:  Immediate intervention in the deteriorating situation in Nigeria
Dear [insert the name of your Minister for Foreign Affairs here],
The continued violence used by the Nigerian authorities against peaceful, law abiding protestors calling for the release of Sheikh El-Zakzaky, must be stopped now.  As many as 12 people were killed today, including a senior police officer, all killed by police fire.
I write to ask your office to make immediate interventions with the Nigerian authorities demanding they desist.  Your office must seriously consider what punitive actions you can take unilaterally as well as part of international organisations, if necessary, in order to facilitate Nigeria’s compliance with basic human rights standards.
I trust you will make immediate representations.
I look forward to your response.
Yours sincerely,
[Your name]

Email addresses of recipients
Selected names and email addresses of Ministers of Foreign Affairs can be found HERE.  Please contact us info@ihrc.org if you have trouble finding the details of your country’s Minister.

Attempts to secure the release of the embattled leader of the Islamic Movement of Nigeria, Sheikh Ibrahim el-Zakzaky, have suffered a fresh setback with the adjournment of a court hearing today that was due to decide whether he should be freed to receive urgent medical treatment.

The Kaduna State High Court adjourned proceedings for the second time in as many weeks in what supporters say is a deliberate ploy to drag out proceedings so that the ailing sheikh’s condition deteriorates to the point of no return.

IHRC chair Massoud Shadjareh said: “This adjourment for one more week has gone beyond ridiculous. The court knows that the sheikh’s health is critical. It has to do the right thing which is to serve justice and stop politicking for the benefit of those who want to see Sheikh Zakzaky dead.” Click here to read more.

Responding to reports that the Nigerian government has proscribed the Islamic Movement as a terrorist group, IHRC Chair Massoud Shadjareh stated:

“If the reported proscription of the Islamic Movement of Nigeria is true, then this is a spectacularly cynical move on the part of the authorities.  It is clear they wish to frustrate the growing pressure from inside Nigeria and around the world to release Sheikh El-Zakzaky and Mallima Zeenah.

“It is clear that the movement and its leaders are the innocents in this situation, and the Buhari regime the terroriser.”

Free Zakzaky Rally in Abuja on Friday the 26th of July
26 July 2019
Massive free Sheikh Zakzaky rally was held at Zone 3 Juma’a Mosque on Friday the 25th of July 2019. People were carrying posters of Sheikh as they called for his quick release from detention to attend to his health which worsens by the day.

Reports reaching the Islamic Movement in Nigeria have confirmed the death of 3 detainees, who were shot and held in Police custody at SARS headquarters, Abuja since Monday 22/07/19. They died on Wednesday 24/07/2019 because of bullet wounds they sustained during the free Zakzaky protest early in the week.

Not only that, more might die in police custody, because there are at least 15 people who are in the detention centre with various degrees of bullet wounds, without medication. Among them are women and a minor who has his leg shot. Click here for more details.

Free Sheikh Zakzaky Peaceful protested completed successfully in Abuja today Thursday the 25th of July 2015. Thousands came out reiterating demand for the freedom of Sheikh Zakzaky. The protesters expressed that killings cannot break our resolve and determination. It kicked up from Area 1, Shopping Centre Abuja. Click here for more pictures.

Security forces Torture, Deny Access To Medical Care For Injured Protesters
25 July 2019
The protester arrested by Security forces on Wednesday the 24th of July was tortured by police before they dumped him by the roadside late evening. Brother Mahdi was severely tortured. The Police also poured hot water on his body causing damages on his body. Click here for more details.

The Islamic Movement in Nigeria has called on the federal government to free its Leader Sheikh Ibraheem Zakzaky and halt the police brutality being shown its supporters during their free Zakzaky protests, especially in Abuja of recent.

This was made known to newsmen today in a press release signed by Sheikh Abdulhamid Bello Zaria, Chairman Shuhada Foundation of the Islamic Movement in Nigeria. Click here to read the full press release.

Police Raid Abuja Hospital, Evacuate Injured free Zakzaky Protesters
23 July 2019
In continuation of their crackdown on the peaceful free Zakzaky protesters, the Nigerian Police have raided the University of Abuja Teaching Hospital, Gwagwalada and evacuated 11 injured victims, who were earlier shot by them in Abuja during the Free Zakzaky protest. Click here for more details.

We exonerate ourselves from Journalist’s, Police commissioner’s death- Islamic Movement in Nigeria
23 July 2019

The Islamic Movement in Nigeria has distanced itself from the murder of the Deputy Commissioner of Police in charge of operations in the FCT, DCP Usman Musa, saying that he may have been a victim of friendly fire.

It also absolved itself from the killing of Channels TV reporter, Precious Owolabi, reiterating that his was a clear case of falling victim to a shooting spree embarked upon by the police yesterday. Click here for more information.

Eleven people have been confirmed dead and at least 30 others seriously injured as the police attack a peaceful Free Zakzaky protest march in the Federal Capital Territory (FCT), Abuja.

Ibrahim Musa, president of the Media Forum of the Islamic Movement in Nigeria told newsmen, in a press statement today that, trouble started when the police prevented the group who are on a peaceful protest from accessing their way to the federal secretariat. Click here for more details.

Hundreds of Canadians of all faiths and backgrounds battled the heatwave warning and gathered in the nation’s capital on July 19, demanding the immediate release of Sheikh Ibraheem El-Zakaky leader of the Islamic Movement in Nigeria (IMN) from the clutches of the Saudi backed Nigerian government after reports emerged of poisonous amounts of lead and cadmium was found in his blood. Click here for more photos and the event report.

The Islamic Movement in Nigeria has called on the general public to disregard a recent statement made by the Senior Special Assistant to the President on Media and Publicity, Garba Shehu claiming that the fate of its Leader, Sheikh Ibraheem Zakzaky lies with the courts not the federal government.

In a statement signed by President Media Forum of the Islamic Movement in Nigeria, Ibrahim Musa, he wondered how the presidency will make such a claim, while it is on record that since December, 2016 a federal high court sitting in Abuja, presided by Justice Kolawole has freed Sheikh Zakzaky and restored his fundamental human rights, but the government has contemptuously refused to obey that court order. Click here for more details.

Sheikh Zakzaky court hearing adjourned until 29 July
18 July 2019
Responding to news that the hearing of Sheikh Zakzaky has been adjourned until 29 July* Chair of IHRC, Massoud Shadjareh said: “The news that this case has been adjourned beggars belief. The health situation of Sheikh Zakzaky is extreme and all days could be catastrophic. The government needs to act now and release Sheikh and salvage whatever little reputation they have left on the international stage. We call on all campaigners world-wide to carry on their protests and campaign activities.”

Massive Free Zakzaky Protest in Abuja on 17th of July’ 19
18 July 2019
Supporters of the revered Sheikh Zakzaky came out en masse calling for his freedom in a protest they staged on Wednesday the 17th of Jully 2019 in Abuja.