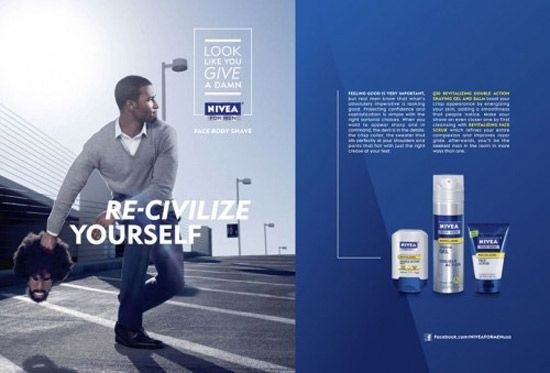 Nothing is random in advertising. Slogans are tested and checked while images are revised, discussed and debated before a poster or TV advertisement is made to ensure it appeals to the target audience. Advertisement is big business; however some brands still make some surprisingly huge and embarrassing mistakes, like Nivea.

Black and bearded – uncivilised?
Nivea found itself mired in a rather negative buzz when the September issue of Esquire magazine included a new campaign for the cosmetics brand. A well-shaven black man, wearing his hair short, dressed in jeans, a shirt and sweater holds a mask of a black man with long hair and a beard. The slogan reads: “re-civilise you.”

The message that Nivea unintentionally passes is clear. In the United Sates, a place where the issue of racism remains a very sensitive subject, it was hard to accept that the brand told its consumers that an afro and beard is not a choice of look but rather a sign of backwardness. In short, if a black man wears a long beard and an afro – he is not civilised.

Boycott
The Twittosphere ignited with interest on the topic with trends growing on the micro-blogging site. Many users called for a boycott of the brand, while others demanded Rihanna, the face of the brand, to break her contract with Nivea.

Furthermore, the poster was part of a broader campaign that shared the slogan “look like you give a damn,” which could result in more or less “give the impression that you make an effort.” The phrase “re-civilise you” does not appear on any other video – not even on one where a white man wears a similar mask of a man with long hair. Nivea did not comment on this.

Nivea removes the ad
Nivea was quick to respond on its page: “Thank you for your interest in our brand as to give us your feedback on our recent campaign – re-civilise you. The ad was inappropriate and offensive. We did not intend to hurt anyone and we are deeply sorry. This advertising will not be reused. Diversity and equal opportunities are key values of our brand.”

Translated from http://www.ozap.com/actu/nivea-retire-une-campagne-de-publicite-raciste/435898 and additional reporting by Aliya Al-Yassin for IHRC.