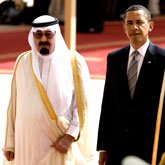 White House advisers vowed that Obama would “take on the tough issues”, including the Israeli-Palestinian conflict, and offer to bridge differences with Muslims based on “mutual interests and mutual respect” – the same words used in his address to the Turkish parliament last month.

Administration officials say privately that Obama has given himself two years for a diplomatic breakthough on a two-state solution for Israel and the Palestinians, despite the opposition of Binyamin Netanyahu, the Israeli prime minister, to America’s minimum demand for a freeze on all settlement building in disputed territory.

Expectations are high for Obama’s Middle East visit, which begins with a meeting with King Abdullah of Saudi Arabia in Riyadh on Wednesday to discuss the Arab peace initiative and relations with Iran before he arrives in Egypt the next day.

The goal of two states living side by side, with the holy sites in Jerusalem under international jurisdiction, is to receive a new push by Obama.

“Some of the things that you will hear in the speech are returning to proven and effective policies and initiatives that have . . . served the national interest well in the past,” said Denis McDonough, Obama’s foreign policy adviser.

Israel was beginning war rehearsals today by launching its largest emergency drill involving 7m people. The cabinet will head to a nuclear shelter to test its performance under hypothetical missile and rocket attacks by Iran, Syria, Hezbollah and Hamas.

On Tuesday morning sirens will sound all over Israel and citizens will be told to find shelter within 30 seconds in Gallilee and within two minutes in Tel Aviv.

Obama has put President George W Bush’s democracy agenda on the back burner in an attempt to strengthen the alliance between America and moderate Arab states against Iran and radical Islamic groups and to revive the Middle East peace process.

A “range of political actors” have been invited to Cairo University for Obama’s speech, but White House officials emphasised the strategic importance of America’s alliance with Egypt’s President Hosni Mubarak.

The Obama administration believes Bush’s democracy drive was counter-productive and came at the expense of economic programmes which might have done more to foster moderation.