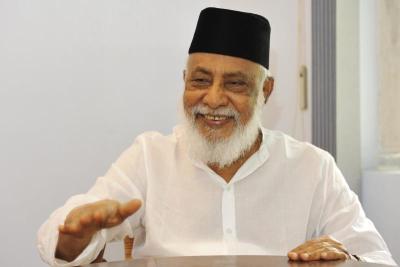 The octogenarian, with his white beard and trademark songkok, is arguably the face of the country’s consumerism movement. And he is not about to let up on his quest to “transform mindsets”.

“I have never celebrated my birthday but if you ask what my birthday wish will be, it’s for everyone to change the way they think.

“I hope everyone can transform their mindsets don’t be enslaved by materialism.

“Enjoy life and don’t be burdened by debts brought about by unnecessary wants,” he said.

He received his early education at a madrasah and Tamil school in India, before accompanying his father to Penang at a young age. He attended a Christian missionary school here but did not finish his education because of the war. Mohamed Idris, a former Penang municipal councillor, is a respected NGO activist but said he has been involved in serving society in various political and welfare bodies since the 1950s.

“The term NGO only became widely used some 15 years ago.

“Before that, terms like environment, consumerism and human rights weren’t mentioned but we did what we could to help through welfare bodies,” he said.

On his biggest achievement, Mohamed Idris, who is also the president of Sahabat Alam Malaysia, humbly replied: “I don’t think I’ve achieved much unless and until I can make society see they have to change their materialistic ways before the world is submerged in waste.

“However, I am proud that we at CAP have played a role in several environmental and food laws being passed in Parliament over the years.”

By CHRISTINA CHIN of thestar.com.my

First Published in The Star Online on 1 September 2012